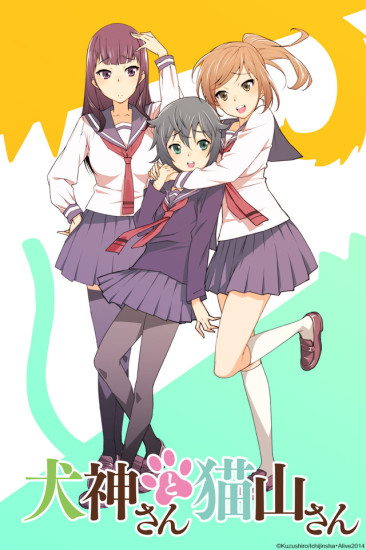 What is this ridiculous monstrosity? Paper-thin Moe archetypes acting out stupidly obvious Yuri scenarios with a vague animal theme that gets haphazardly dragged out occasionally. Oh, the cow-girl has large breasts, oh, the dog-girl is guileless and hungry for affection, don't make me laugh. But it did, it did make me laugh.

I loved it. I know, a long bow to draw, but the exaggerated stupid responses to characters being dumb really tickled my tire, and the relationship between the titular leads was genuinely sweet.

I'm not gonna lie, I'm a sucker for Shoujo-ai/yuri series and I'm attracted to this genre as much as a bear is attracted to honey, or a fujoshi to yaoi. After getting to know this anime I decided that I wasn't going to just watch it but also review it! So here I am, leaving my impressions about this anime.

As expected from a show whose episodes are no longer than 4 minutes (which also happens to be an adaptation of a 4-koma) there's not much story, just enough to get the setting ready and let the characters do the rest. Speaking of the characters, they have some unique traits based on the animal they represent. For example, there's Nekoyama, the dog-loving cat-like girl whose hair tends to look like cat ears, and also there's Inugami, the cat-loving dog-like girl who  is so hungry for affection she would go as far as trying to get Nekoyama drunk... on catnip (yes, catnip). Among this madness there's Aki, the only non-animal girl who also happens to be the only sane person in the show. Sadly some of the secondary characters were a bit underdeveloped.

Animation-wise it was quite sweet and the characters were quite adorable (especially Nekoyama). The voices and sound effects were spot-on, though the ending took the cake. It was absurdly sweet and adorable.

In short, this show is what you'd get if you mix Sakura Trick with Yuru Yuri and you cut it in small pieces to avoid it getting dull and/or repetitive. It was a good watch

Warning this Review May Contain Spoilers

Ahh, it's been a while since I reviewed something, so I thought I'll try and review this. I watched this thanks to the daily anime marathon club on the forum and I have to say, I honestly enjoyed it. I found it cute and fluffy, a perfect watch after dreading going back to school after a long winter hoilday. Anyway back to the review XD

Yeah, 4 minutes isn't very long for a story but I believe this series used that very well. Short comedy sketches that show different silly situations that you can easy laugh at and enjoy, well that is what I felt when watching this. But even so they are only 4 minute episodes meaning that any story that was supposed to be there was quick, making the story overall a bit quick.

The animation presented in this series was sweet, it may of come across as a bit simple in some areas but it worked and I can't complain about really. From what I saw in the short episodes of the anime was a cute style that fitted the light theme of the anime.

Cute and Fluffy, Simple and Fitting, each sound aspect was well thought out for what the anime was. The opening/ending fitted the story and honestly worked really well. The voice acting was also cute but nothing stood out, which is why my rating of each section isn't too high.

Finally, I'm going to keep this section short and sweet. Each character had their own personalily there wasn't one character the same as the others, each had a special point to their character making them unique within the anime. However they are generic in the general spectrum, which may of let it down slightly buttttttttttt in the end there can only be a number of different personalities.

Finally a high ranking short episode anime, a definate watch for those interested in something light and fluffy XD

Studio Seven’s 2014 yuri show starts with a promising and original premise: a cat-like girl, who loves dogs, hooking up with a dog-like girl who loves cats. This gag runs and runs with an ever-growing cast of characters all of whom have animal-like characteristics, all of whom are high school girls, and all of whom prefer intimate relationships with other girls. The anime is based upon the four panel yuri manga by Kuzushiro running 2011 to 2017. Each episode is just over three minutes long and suffers from a typical issue faced by such anime: it is very hard to follow what is happening as the delivery is so rapid the audience doesn’t really get to understand the plot or the characters. This may less of an issue for native Japanese speakers but for those of us following on sub the story seems bewildering at times. “Inugami-san to Nekoyama-san” is by no way the worst example of this problem. Despite the breathless pace it is possible to just-about follow what is happening. The setup is vibrant and there is a lot going on here to entertain (if you can follow it)!

The story develops quite nicely after the two main characters (dog-like) Yachiyo Inugami and (cat-like) Suzu Nekoyama meet in episode one. It is love at first sight for them after being introduced by Yachiyo's friend (and Suzu's classmate) Aki Hiiragi. Pretty soon we have also been introduced to Yachiyo's classmate Mikine Nezu who is mouse-like. Then there is the cow-like Yukiji Ushiwaka and the monkey-like Sora Sarutobi. Mikine and Yukiji form half of the “Biology Club” and they appear to be an item. Their adventures involve school clubs, swimming in the school pool, shopping together, going to karaoke and the usual summer festivals. Episodes swing on the girls’ crazy eccentricities and silly behaviours. Since cat-girl is extroverted and dog-girl is introverted there is obvious friction in their antics. There is nothing particularly novel in this and there is no specific story other than that running gag about the animal-like attributes of the main characters. It really deserved longer episodes and better pacing with more material. Unfortunately, it runs helter-skelter fast with no specific objectives in delivering a story arc. We really don’t get to know the characters nor do they get to explore the potential in their interactions. This could have been so much better. A likable & neat idea under-exploited.