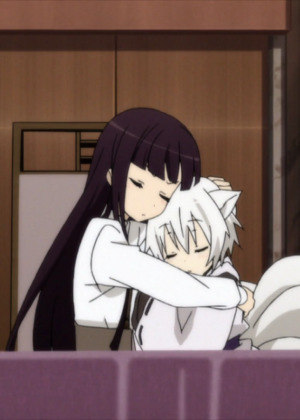 If you're looking for anime similar to Inu X Boku Secret Service Special, you might like these titles.

These anime are both based upon refined wealth, sophistication... and astonishing dysfunction.

1. Supernatural beings are centrall to both

3. Both central characters are protected in a master/servant relationship (sometimes grudgingly) by servants with deadly skills and deep, dark secrets

4. Comic relief comes often with both stoic, small-statured central characters being shocked into indignance by the conduct of their more light-hearted companions

5. Both central characters experienced trauma and live with a heavy burden from their actions and their identities, and prefer isolation to company... but are secretly lonely

When his new high school's dormitory burns down, Yushi Inaba is left scrambling to find housing that a sixteen year-old orphan can afford. The only place he finds is an old apartment building called Kotobuki-so, where the rent is cheap and the building is... haunted?! A ghostly boy wanders the halls with his dog. The cook is completely invisible except for her hands. And the landlord is a giant youkai, who doesn't like it when the rent is late! The unfazed human residents live right alongside their unearthly neighbors; and now that Yushi has joined their community, his life is about to get much stranger!

Second season of The Morose Mononokean.