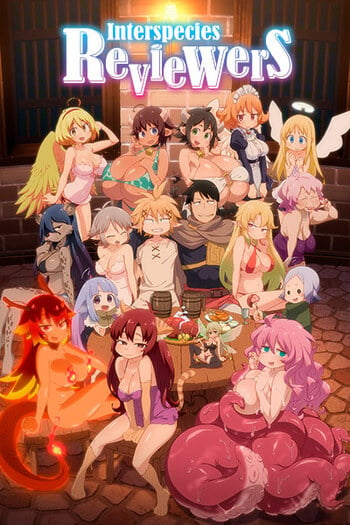 Let me address the elephant in the room, and no, it is not the one in your pants. I have watched every single available episode uncensored, however the censored version is probably more appropriate if you still live with your parents, but I have to say, I am peaved that I have to use a completely different browser any time I want to watch the next episode because not only was it removed from certain places, but google prefers telling me how bad I should feel for enjoying this, WELL FUCK YOU GOOGLE I FUCKING LOVE THIS ANIME AND I AM GOING TO WATCH IT WHETHER YOU LIKE IT OR NOT.

But seriously, I fucking love this shit. I have to watch it when my Boyfriend is at work otherwise he often complains about my shrill laughter coming from my computer in the other room. I have woken him up on several occasions due to my incapability of self control. There was one episode I found so hilarious that my boyfriend wanted to "put me to sleep" because I of my "Hyenna loughter that would sound better if I was dying" and "your pussy isnt worth this torture, we are breaking up-"

Butal honesty out of the gate, this anime isnt for everyone. This is the anime only meant for peope with the best taste who are true men of culture.

The show centers around 3-5 guys all from different races going around to differnet monster girl brothels and testing them out and writing a review that they put up in their favorite tavern for the other patrons to read. The fun stems from the misadventures and fun they have at each brothel and the personalities of the different girls they are with.

The characters are all super loveable and the opening song is great too. Crimvael is best futa in the show for sure and anyone who says they aren't is a liar and should be punished. Stunk is basically my spirit animal and obviously the most relatable as a fellow human. Zel is pretty good but his distinct lack of love for big boob elf women but love of saggy old human women isnt as nice. There are 2 others who some times tag along, a halfing and a bestman. They aren't seen as often but when they are they contribute to the hilarity.

Lets get down to the brass tacks. The show is about sex and the enjoyment of or disdane to the brothel that they visit. Its definitly R rated and actually contains more then the manga does as the actual scenes from the brothels were never in the manga and is an anime only feature. The differences in personalities between the monster girl races keeps the show fresh and keeps your attention. Overall i rate the show very highly, its an excellent visual masterpiece that is a perfect representaion of the times and how far anime has come in the last decade. This should very vell be a contender for anime of the year if it continues to provide the steamy entertainment it has thus far. Dont knock the anime until you have had the pleasure of viwing it for yourself.

I started seeing some memes of this online when the first few episodes were released to the US and I loved it, really let my inner girly fantasies run wild. The brothels are always something I might not have thought about in any dream but they make a lot of sense aesthetic and utility wise.

I wish there was a little more story on the characters but as you watch more you get glimpses and even start noticing personality traits and of course their preferences, even if it's hard to have preferences yourself choosing through so many girls and other creatures. The story does stick to what the anime is supposed to be about, something I really enjoy. It sticks to sex comedy and just that, a few characters are introduced hastily but you'll find everyone to be a family if you're into that kind of lewd stuff.

It might not be for you but I've definitely been enjoying it. I'm glad that people can enjoy drawing and writing something they can have fun with or are passionate about. Thanks for reading this far but you should probably get back to pretending you don't live on planet Earth, have fun watching!

Great characters, good art, goofy situations... it's a solid watch that might make you feel a little uncomfortable at times but you'll always be curious to see what happens in the next episodes. Not to mention that there is actually some really great world-building in this show that probably a lot of people will overlook due to its genre.