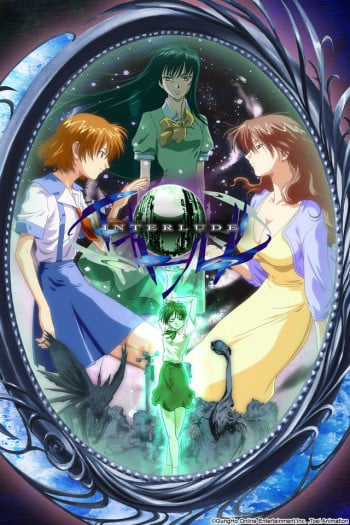 In Japan, there is a disturbing rumor being spread that people's shadows are ripping from their bodies, never to be seen again. For one young man, the frightening nature of this rumor is just beginning to manifest in the form of a nightmarish world that he can't seem to escape from. In this place full of dark minions and demons, he and his friends fight futilely against unknown enemies, only to be brought back to the "real world" as quickly as they left it. Is this real, or a dream? Only one person holds the key to destroying and saving the world as he knows it...

Introduction People seem to be having trouble differentiating anime that’s actually intelligent from anime that merely pretends to be, and Interlude is a fine example of this phenomenon. The show is a rather sorry piece of work that attempts to be “deep” merely by being confusing, and yet many seem to believe that there is merit here. Trust me: there isn't. Animation Overall, I was disappointed by the animation. Character designs are decidedly unoriginal and unappealing, and the show uses a lot of repeated footage (there are several recap segments that actually recap what has happened in THAT VERY EPISODE, something I can’t stand at all). Action scenes are somewhat tepid; most of them consist of either awkward motion or no motion at all. Props should be given for some excellent imagery in the alternate worlds (in particular there is an outstanding cherry blossom cgi effect that is used twice), but for an O.V.A the animation is definitely underwhelming. Sound Music is passable and works decently with the show, but the voice acting is definitely weak. Of particular note is the ear-piercing abomination of sound that is Tama’s seiyuu. Story The show has many flaws, but probably the most damaging ones lie within its storyline. For one, the plot is horribly hackneyed; every idea that this anime manages to regurgitate has already been done better somewhere else. The whole “subjective reality” theme that this anime belatedly tries to embellish on feels rather half-witted in comparison to what was done with the concept in animes like Serial Experiments Lain or Perfect Blue, and traveling from a normal, school kids world to a fantastic one has been done in so many different animes that it would be a chore to list them all. As if the creators knew ahead of time that their high-fallutin’ plot concepts were too dumbed down to be intellectually stimulating, an annoyingly large amount of lame fanservice (“It’s not my fault I have big breasts!”) and trite schoolkids humor is unnecessarily injected into the series to make the show even stupider. In the end, these elements absolutely ruin the dark surrealistic mood that the show is shooting for. Character Characters are woefully underdeveloped with no exceptions. The main character in particular is so tiresomely generic that he seems perfectly suited to act as the protagonist to a hentai. Also of note are the three government worker girls who appear midway through the show. These individuals have absolutely NO purpose other than to provide a portion of the aforementioned fanservice. Conclusion To sum things up, this three episode O.V.A carries the dubious honor of being the dumbest “intellectual” anime that I’ve ever seen. Interlude is boring, cheesy, unnecessarily fanserviced and clichéd. I came in with relatively high expectations, but in the end I was disappointed in just about every respect.

StoryWhenever I dip my hand into my archive of older anime, it is always with a fair bit of reluctance - especially when dredging out that which I once thought good. Past experience has, more often than not, reminded me of my formerly questionable tastes, as mediocrity and greatness too often seemed intertwined. Still, ever the optimist, I make a point to try to find the diamonds in the rough, as discovering that classic "oldie but goodie" makes all my rummaging worthwhile. Much to my dismay, though, Interlude happened to be another testament to this former trend of poor judgment. What I once remembered as a gripping, top-notch OVA turned out to be a conglomerate of poorly contrived sci-fi, obnoxious fanservice, and haphazard storytelling. Even so, it's not entirely bad, as it manages to be superficially enjoyable most of the way through, and carries enough mystique to warrant extended interest. It begins with a fairly typical premise: a high school boy is living out an ordinary life when a sudden array of strange events befall him. These, of course, include the appearance of parasitic monsters, warped memories, and troupes of women with breasts and outfits that could rival the best of the Victoria's Secret models. Indeed, virtually every important plot twist is accompanied by some form of fanservice shot and/or groping, which ends up watering down all the OVA's attempts at seriousness. As such, Interlude ends up being largely comical without much in the way of actual humor. In addition, its climax is befuddled to no end, and somehow manages to throw in notions of "unyielding love" in its equation despite there being no real romantic focus throughout. Even so, despite how many times the OVA shoots itself in the foot, it keeps on walking at a steady pace, and concludes just before it spills over into tedium. The fact that it turns out being a grab-bag of a good five to ten genres does not really speak well of its quality, especially given its OVA length, but its many different elements somehow come together to bestow it with some semblance of entertainment value; definitely shoddy, but not without some merit.AnimationSurprisingly, despite Toei being behind Interlude's visual score, the OVA looks quite good. Though a fair number of scenes hint at its age, the quality of animation is, by-in-large, high in standard. All of its scattered action sequences are vibrant and fluid, and most certainly add to the overall  appeal. This also holds true for the CGI effects, which fit in nicely both thematically and aesthetically, and bring alive characters like Hedgehog whose natural appearance is supposed to be "digital." That said, there are still a number of flaws, with one being the abundance of stills used toward the end. The other, though, is an inappropriate placement of scenes; the rose-petal backdrop of Aya's archery sequences, for instance, looks great but is utterly tacky given its story placement. Certainly not a deal-breaker, but an annoying quip nonetheless.SoundFor much of the OVA, the music just drifted around idly in the background, and seemed more an abstraction than anything else. It did little to add or detract from the mood at any given time, save for the horror bits at the beginning, and overall really isn't worth much mention. I suppose it aptly did its job,  but it definitely could have been used to greater effect, especially in helping to smooth out the rough edges the excessive fanservice created. When matched with a relatively average set of voice actors, Interlude simply lacks much audible immersion, and left me rather unimpressed.     CharactersWhile Interlude's story, despite its flaws, proves mildly entertaining, the cast of characters play little to this effect; the main guy, for crying out loud, is nameless. Many, like the G-cup/string trio, pop in and out with no real purpose to the story, only to vanish suddenly with the coming of the climax without any explicable reason. Others follow a "whatever is currently expedient to the story" trend, and haphazardly appear for the sole purpose of moving the plot to a different setting. This gives the cast a very whimsical feel, and as such it is terribly difficult to form any sort of attachment to either them or their plight. Come the ending events, none of them seem particularly necessary to any of the events, as they're lazily generic and uninspired. Fortunately, the plot doesn't really require them to be more than this, so they perform their jobs well enough to be passable. Still, they never get beyond generally mediocre, and do little more than keep the ship afloat; it works, it just isn't good.OverallDespite being littered with flaws left and right, Interlude is nevertheless decent - at least for an OVA. Though it could have used considerably more polish and tact, it managed to grab my attention for a couple hours, and for that I certainly cannot shoot it down outright. If you enjoy a bit of sci-fi or are a fanservice bot, Interlude is probably worth your time; if not, your time is probably better spent elsewhere.