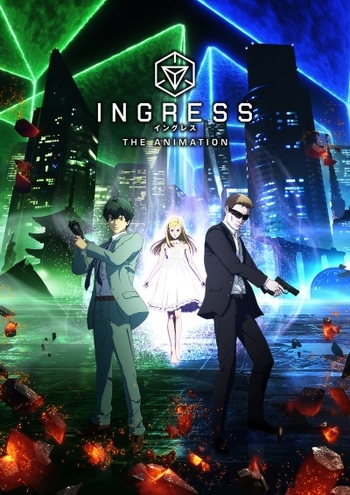 It has potential, it really does. I think the fact was for somethings, not just because it was made by Netflix or anything (They have made some really good animes ) but just because it seemed like they just gave up and went with the flow and just pulled stuff out of there minds and said, " Yup, just like that. Put it into the episode " and that's it. Of course, truth be told I have only seen 3 episodes and it made me want to drop it so fast.

It was to fast paced and your eyes could never focus on one scene or even think through of what just happened on that one scene. Even already on the first episode, we're pulled into the main girl getting pulled into a meeting of some sort with talking then an explosion.

No plot line whatever, you can never understand what is going on around you or even where the plotline is going. They throw to many things at you all in one, especially on the first episode of how you already get 2-3 other characters who are also so confused. I believe they were going for a learn on the way kind of anime- but they just threw to many things at us that it was so hard to even think about.

The game and how it is related to the anime:

I never played the game personally but my parents have, and from what I remember, it had nothing to do with people. Abilities, a society in where you fight against the wrong people. There were portals, and signs, and protect your protals from the other color. There was no "wrong" side to say, it was just clashing teams going against each other portals or gates.

It has potential, maybe if they re-did it could be better or at least make us understand it. But yeah, just my point of view of how I see it. Go see for yourself you'd like.

It should be noted I dropped this show after ep 2. The show had way too many problems.

1. The CGI was horrible. It faces the same problem that most CGI Netflix shows run into.

2. Some parts of it requires you to have some knowledge of the ingame, while most has nothing to do with the game at all. I played the game when it first came out and found it interesting. But that was multiple years ago, and there is no way to remember all the details. But I don't recall any part of it giving given players special abilities over others.

3. The story is all over the place. Instead of nicely introducing us to the people, it's just throwing them at us.

4. The overall story isn't good. Other than the video being linked to the Ingress game, there was nothing in the show that really told me why I should care.

There is a number of other problems, but at the end I will say watch the first ep and see what you think. If the problems are a bit much for you, then I'm sure you will be looking at dropping the show too.

Well....eeehhh i dont think so.I mean this anime clearly has cgi problems.the story is average, quite clever , but the characters are lame and boring.I haven't finished the anime yet,despite not having many episodes,but i think it's gonna take a while till i end it.I don't recommend it!

Well now that i have finished the anime you know what???I won't change my mind.Till the end it was boring..The only thing that gave a spark was the usual good vs bad ending.That's all.Not recommended from me..

Honestly, the highlight of the series for me was the soundtrack. The characters, plot, and animation were mediocre at best.