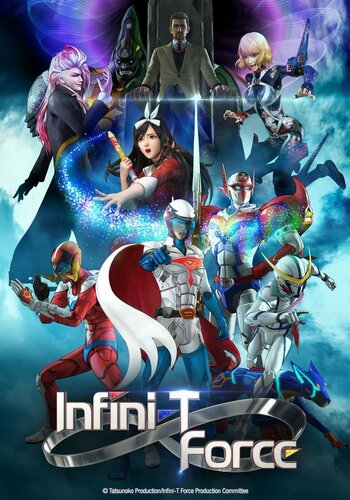 There will be some spoilers later, but I'll try not to go overboard. I gave the story a 4 because it really felt like a copy paste story. Really the story seemed like they were trying for a safe approach to showcasing the animation. Now, going into this I was sceptical because the animation was 3d. 3d anime rarely have even acceptably passable graphics to them, so I tend to avoid them. Since I'd watched most everything I planned on watching from this season I decided to give this anime a go. I was surprised that the story was more of a reason to want to drop it than the animation was. Granted, if you compare the animation to video games that have 3d you'll notice that this seems a bit dated, but still better than most 3d anime.

Anyway, here's the part where I start in on the general plot. If you don't want any spoilers turn back now. If you continue, I'm going to try to dramaticize the WTF points of the plot to give you a reason to check it out to see wtf i'm talking about.

So this is an anime about one girl's daddy issues and how she saved the world thanks to those issues. No, really. In the end she even goes off with the father figure super hero to go help him protect his world. I digress. Her dad abandoned her when she was a kid so she started living a nearly suicidal life. Turns out, this is bad since every time she could have died her pop was destroying a world in order to prevent her from dying. So one of the heroes in one of the alternate worlds kicks the sun out of her dad's hands, it travels across dementions, and pierces his daughter's chest then turns into a giant pencil. The heroes fight her daddy's henchmen (the pervert, the vampire, and the lovable... wtf ever he was supposed to be) and beat them a couple times. Daddy and daughter "meet" and the daughter eventually caves in to her daddy issues and gives her daddy back the pencil which turns into a sun again. Yay more destroyed worlds. Heroes disappear, daughter forgets them, once again she meets with daddy and opposes him. Heroes pop back into existance, they kick daddy's rear end, the day is saved. The heroes go home. The girl saves a kid and gets splatted by a truck. or would have if she didn't get teleported to the side of a building so she could have a short conversation with the daddy figure hero and then he takes her to go help him save his world, the end.

Almost sounds interesting, right? Like I said earlier, these are all the points I found interesting dramaticized to make you go wtf and be interested in watching, because it really is worth a watch, if for no other reason than to promote better 3d animation (still heart broken by berserk). However, the whole thing has the same feel as most female protag surrounded by hot guy anime. If that's your thing you might enjoy this more than I did, but the fairly typical female protag and the very cliched lineup of guys for the heroes mixed with an evil parent and stranger in a new world (felt really similar to Re:Creators in ways) thing just didn't cut it for me.