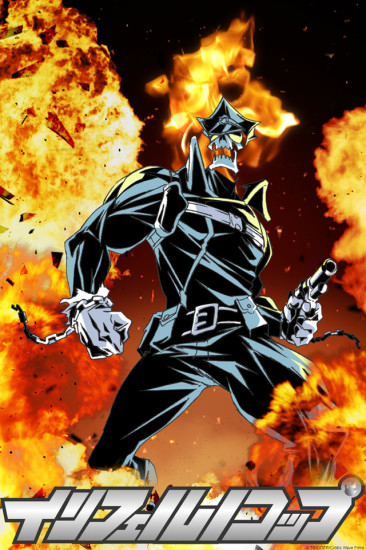 Kenji Fujikido is a salaryman whose wife and child were killed in a ninja turf war. In a brush with his own death, Fujikido is possessed by an enigmatic ninja soul known as Naraku Ninja. Fujikido cheats death and becomes "Ninja Slayer" -a Grim Reaper destined to kill evil ninja, committed to a personal war of vengeance. Set in the dystopian...

Made by the same guys, in the same style and just as random. If you liked one, you'll probably like the other.

Both series were made of the same people and also share the same animation style (or better said, lack of proper animation). They aren't identical though since Ninja Slayer follows a plot while Inferno Cop is a succession of random events barely tied together. If you liked any of them and you dig the animation style then don't hesitate to check the other.

Both of these series are from the same creators, and partially use the same unusual animation style. Ninja Slayer is higher budget, featuring some segments of more standard (though still deliciously stylized) animation between the longer sections of Inferno Cop style cut-out characters, longer episodes, and some sort of semi-coherent plot. Both, however, share the same sort of absurd parody-of-parody comedy poking fun at classic action tropes even as they engage in them in the most eccentric ways.

The top-class boys school in the prefecture, Baramon Private Academy. The protagonist who just transferred there encounters various tough guys at the school. As soon as you pass the gates, there was handsome— The outlaw teacher, the captain of the soccer team, his childhood friend who he hasn’t seen in seven years, etc... This is a school love...

While the premise of both shows is as different as night and day, they have plenty of absurd, non-sensical humor combined with intentinally atrocious animation. They both appeal to the same audience so fans of one will definitely enjoy the other

Both series have stupid over the top humour that makes you laugh and cringe all at the same time. The art in both is also... questionable, to say the least.

The Earth Union is locked in a massive galactic war. Aboard the Space Battleship Tiramisu, ace pilot Subaru Ichinose carries the fate of humanity on his shoulders. Life for Subaru is tough. But nothing relieves tension quite like launching an all-out food-based assault on his own face. Snug as a bug in a rug, Subaru soothingly unwinds in his personal mecha...

Both series are just utterly ridiculous, Inferno Cop more so, but none the less the humour is very similar in both.