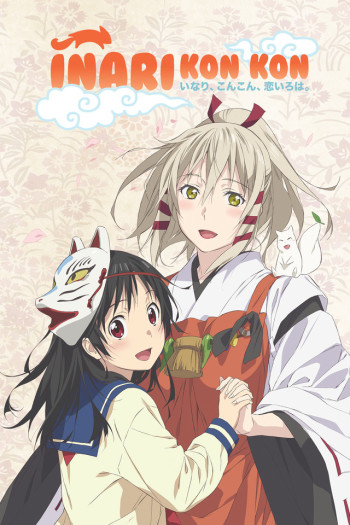 Inari, Konkon, Koi Iroha is a very delightful anime. It proved to be very suspenceful at times, but it, however, did not leave you hanging for long.

Inari, Konkon, Koi Iroha was very well thought-out. The beginning introduced the main character nicely and did not reveal anything too heavy. Along through the story you are introduced one-by-one as each problem seeks new characters. Inari may have a crush on Tanbabachi, but their relationship is left to the viewers imagination while only to go off of Tanbabachi's realization of his crush on the main character and a few hand holding scenes. (Would have really looked forward to a kiss scene.) Even thought the romance aspect wasn't all that fullfilling, the fantasy aspect was well brought with magic and power gain around every corner. Even though Inari did not use the power she had gotten from Uka-sama occasionally she did use it responcibily. The most disliked part of the plot, for me, was how much untied ends it left. There were no goodbyes, just nothing.

After watching most of the episodes, many will realize that the anime doesn't just "copy and paste" the characters. Each character was well planned and seems to fit their personality. That, unfortunately, is where my satifaction ends. At many points in the story the animators used CGI instead of keeping a 2D aspect. The area of Colonial Plains was a bit of a change in the wrong direction, but it had seemed intentional. Whether it be intentional or not it did not fit, not in the good way. I think the animators were trying to make the location seem magical or just like the ancient art seem in most Japanese drawings, but it did not leave that kind of feeling and instead left a sour taste in my mouth. As for CGI, at the time when Inari was saving Uka-sama from fading is when Kon had called out to all sleeping fox idols and they had gotten up in a roaming, flying fashion. This did not benefit the anime because they all looked copy and paste and it just wasn't satifying.

Music was absolutely wonderful. It felt very traditional and was very soothing to the ears. The only complait I do have is when Kon and the other fox spirits (Roro and Shishi) were calling out to wake up the fox idols. That time it certainly hurt me ears to here repetitive howling. The crying parts weren't all too better either.

The thought of each character was very individualized, but when it came down to it there was not much back story to them. The only person we learn much about is Sumizome, who we learn has a detachment towards people because her parents were always working.

This anime left me with a relaxing feeling. It was sweet and short, very to the point. It may have been only 10 episodes long but it got the job done. I was fairly satasfied in the end. I would have to recommend this to anyone looking for light-hearted comedy and easy-going romance.

Inari Kon Kon Koi Iroha is a new anime that i found through speaking with a fellow otaku. She told me i should watch this, and imeaditly i looked it up on the web. I saw that it was about a girl who made friends with a goddess and had only experienced unrequited love.

After i watched the first episode i was entranced. I did not stop watching until i could watch no more. It tore me to pieces when i had to wait, one day for the final episode. Once i finished this anime i knew it would be one of my favourites.

The storyline was fantastic. It seemed like a normal girls life, excluding all the divine power and gods. The animation was great! I never like watching an anime with bad animation, but this one was easy to watch. It pleased my eyes. The sounds matched what was happening in the episode and the characters had unique personalites. Who would of guessed a little girl could scare a body builder, (I mean you Keiko).

If you haven't watched Inari Kon Kon Koi Iroha i suggest you try it.

I don't think that this anime was very original or that the plot itself was developed well enough to keep my interest. I made myself watch it but it did not amuse me. I think the story line is rather predictable and overdone. The main charactaer gains divine power from a God that is her friend. This is similar to Kamisama Kiss in premise but not nearly as goot as that one unfortunetly.  Also the Goddes relationship with the main character's brother did not really develop which I think culd have added some points to their plot.

I enjoyed the animation as I typically see of the newer animes. The opening and ending themes as well as the character's voices were well suited for the story.

None of the charatcers stood out to me. The main character is the typical clumsy, pure hearted, and somewhat dumb type which is very stereotypical of many animes. It almost reminded me of Sailor Moon.

All in all, this anime was okay in my opinion to kill some time, but it was not very original in any way.

ART: There is no problem with the art but this is pretty hard to mess up these days. The animation does what it is supposed to do and it looks good while doing it. There is quite a bit of CGI used here but it is used well in that it is not invasive.

SOUND: Again no complaints from me. I have watched the anime a few days ago but can no longer remember either the OP or the ED song. This is how I generally prefer it so I'm fine with it. Voice actors did a good job overall.

CHARACTERS: Main character is Inari. She is a young girl who makes friends easy and tries to do the right thing.

Touka is Inari's older brother and, unlike Inari, he has always been able to see Gods. He is very protective of Inari.

Tanbabashi is a classmate of Inari and she has a huge crush on him.

Uka is the local God of the shrine in the city and she becomes best friends with Inari.

STORY: Inari has always had a passion for the local shrine and whenever she can she walks the grounds. One day she saves a small fox and she is introduced to Uka, the God of the shrine. She gives Inari a wish for saving the fox but things go south fast and Inari ends up holding a piece of Uka's divine power. Unfortunately humans aren't meant to have Godlike powers and things have to resolved before calamity strikes.

RANT: I really liked this anime. There is almost no action and not much happens but I still liked it. This anime can best be described as a slice of life comedy/drame with some supernatural elements.

I tried to figure out why I liked it and it came down to characters. Each are likeble in their own way and things progress naturally. Things happen for a reason and that is something that I really appreciate. Too often things just happen because of plot with little reason given but not here.

A little thing that happened a few episodes ago suddenly comes back to throw things out of whack. It also gets fixed quicly but since these are minor problems to begin with I have no issue with this.

The only problem I had was the final episode as it is pointless. Everything gets resolved in the epsiode before that so I started watching the episode wondering what it was about. Some time later episode? Uka and Inari epsiode or maybe Uka and Touka? Well, no.

The final episode takes place sometime during the main series and is a Kon centered episode. Sort of Kon's day out and it doesn't fit. To be fair it wouldn't have fit anywhere in the series but it would have fit better halfway through. Inari, Konkon, Koi Iroha is an outstanding anime. The mixture of comedy and supernatural things are blended outstandingly and of course some romantic moments to spice things up. From the lung cancer causing comedy moments to the heart thrabbing kawaii moments. Inari will surely entertain you till the end. This anime is worth a space in your anime list.