In This Corner of the World - Reviews 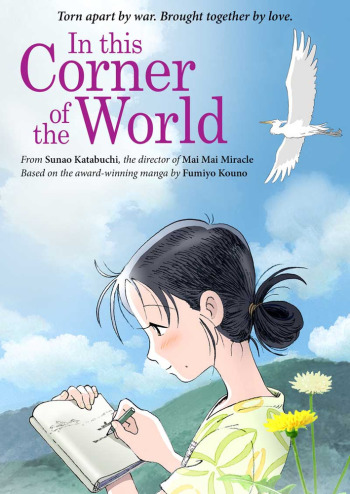 In This Corner of the World is an extrodinary pieve of art that should be on everyones top 100 films to see before you die. Without telling anything to give away the plot, and believe me it was harder than i expected. When it comes to growing up/living in one of the most famous events in WWII set as the location of the film, you already know how it's going to end. But the one thing that you wouldnt expect is how much you care for the characters in such a short amount of time. if you love historical anime or even slice of life you'll no doubt enjoy this film!

In This Corner of the World is a unique and refreshing movie that I feel is absolutely worth watching.

The movie is a historical slice of life set in WW2 era Japan. It does an excellent job of working within this setting to portray the lives of the ordinary people who lived and worked through this time rather than focusing on the battling or conflicts. I really enjoyed how it weaves the story of one girl, Suzu into the larger fabric of the struggle of the era and manages to show a new perspective on the war.

Although the animation quality is not as crisp and moe as a lot of shows made recently, don't let this turn you away from watching the movie. The animation style gives the movie a very 'classic' feel that reminds me of the Studio Ghibli films. The soundtrack is very nice and does a great job at adding emotion to the movie.

The best thing about the movie, in my opinion, was the characters. I felt like they all had a purpose and each had their own lives, even people you only saw in one scene had detail put into them. There was only one character who I felt was not done justice but overall I really liked how each character was introduced and developed. Mostly because you had to pay attention and infer what people felt rather than being told who anyone was.

You should watch it.

In This Corner of the World is a slow, weirdly paced, boring slice of life that takes place in 1930/40's Japan. It failes to present the difficulties (or any other aspect) of those times in a way that befits a 2 hour long movie. I don't really know why this movie was made, cause documentaries can be much more interesting and engaging than this. I was expecting at least more drama out of it or anything that would be more touching. Instead I was bored and annoyed.

Some other things that made this movie unwatchable for me were: jumping from place to place making it hard to follow, bad dialogues, awkward humor, unlikeable characters and terrible voice acting (Suzu).

amazing story, makes you feel and cry so much. at first, you think it's just silly but when you take the time to watch you notice its something much more than that. its sad and happy, some jokes here and there but so heartfelt, everyone should watch.