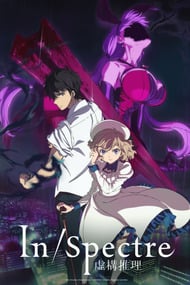 Both touched by spirits called yokai, Kotoko and Kuro have gained unique superhuman powers. But to gain her powers Kotoko has given up an eye and a leg, and Kuro’s personal life is in shambles. So when Kotoko suggests they team up to deal with renegades from the spirit world, Kuro doesn’t have many other choices, but Kotoko might just have a few ulterior motives…

Oh boy, what a mess of an anime this is. As someone who is grounded in reality and knows even a bit about anatomy, In/Spectre becomes completely unwatchable for me just a few episodes in seeing the grotesque mishandling of the show. I managed to watch about 6 of them before i finally just decided to drop it. Want to know why? Read on.               Spoilers ahead.                 The lack of detail and oversight in the visualization of Kotoko's disabilites is nothing short of shocking.. Her right glass eye (One of her legs is also gone, more on that below) gets the worst of it: It's fake, it's glass and it's here to stay.. Right? Wrong. Yes, those are pupil contractions for a.. Glass eye. The show never stops portraying it as a regular eye unless it's specifically mentioned and/or interacted with some way. And i mean 'specifically'. Kotoko completely lacks the subtle change of patterns that these kind of disabilities bring like having almost all of your (in this case) right field of vision be gone and it never fails to perfectly track pupil motions like her real eye, despite prosthethic eyes only having limited degrees of such motions. This is most frequently done by her having look over at characters using the right side of her face instead of the left.   "Well alright, they screwed up the eye bit, sure.. But what about the leg?" Same story: Unless it's a fight or some such, she just walks around with a cane. That's it. She bikes, she fights, she runs downstairs like it's nothing and sometimes, it's so bad at some points where the walking stick might as well just be a glove: Now while I would love to end my complaint about the animation in this anime here, there's unfortunately MANY more examples to be had. The fighting choreography is slow and generally sluggish at best and-... Okay, i'm just gonna end it here and leave you with this woman falling back (not pushed in any way) on her Portal Aperture Science Repulsion Gel Bed:   ------------------------------------------------------ ------------------------------------------------------ Moving on, we have the story.. Or a lack thereof. Kotoko got kidnapped while she was young by "monsters" to be made into their "leader", she goes "ok", gets maimed to get some "superpowers" which is to see and touch monsters.. Problem with this is that others have shown to do this without having to get maimed, hilariously enough. ^ Then Kotoko gets the hots for this extremely bland, random dude she meets in the hospital whose only noticeable traits is that he has a healing factor and has foresight, sorta, because he ate some fish.. Following this, they go around beating up "bad" monsters or just talking to other ones about "mysteries" while making it as confusing as possible by feeding the viewer false &/ extremely convoluted information or just taking 4-5+ minutes at a time trying to explain how ghost/monster stuff works, often while throwing hypotheses back and forth like it's tennis. On-top of all this, you also have these obnoxious segments where the screen is rapidly switching to various angles as it reads 4chan sh*tposting about X thing currently happening. Combined, it's extremely difficult to follow, it's extremely difficult to care about and it becomes progressively worse with magic and friendly monsters and/or their abilities being thrown into the mix. ------------------------------------------------------ If you read that^ without getting drowsy or losing interest, i commend you because i must have fallen asleep a good half dozen times trying to watch this garbage.. Subsequently, i recommend you to not try to do so yourself.

Let's get straight to the point. It's a very slow-paced show that relies heavily on its dialogue and its thorough build-up, which simply isn't for everybody. I think most people will appreciate the cast due to the witty and cheeky personalities but will probably lose interest in the main plot around the halfway point, I personally really enjoyed the show and not just for its main characters. There is a lot of focus on the what-ifs and for somebody that enjoys trying to figure out what the main plot of a show is and where things will be going, I appreciated the time the show took to dive into each what-if situation. But there are moments where it falls a little flat. Kurō is a little bit of a buzz-kill among the main cast. The boy means well but he just really comes across like he doesn't have much of a personality while Saki, Rikka and Kotoko are all three very expressionate. It won't be a big issue if Kurō wasn't in the middle of it all but he is. The interactions between Saki, Rikka and Kotoko are highly entertaining though which is what makes the show so enjoyable. I enjoyed it a lot but I would find it hard to recommend it to others and that's mainly due to its pacing.

What a great idea, I love the general plot idea. They went about it in such a boring way, it's so slow and the progression relays heavily on dialogue. It was a bit annoying for me, but that's just me who prefers to see a balance of action and plot. it had enough story to keep me watching, but it was hard to get though each episode 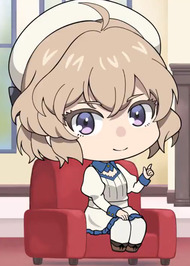 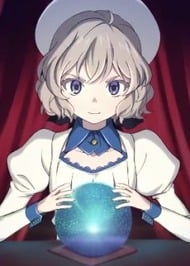 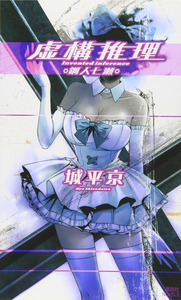 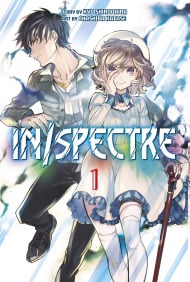