In Another World With My Smartphone - Recommendations 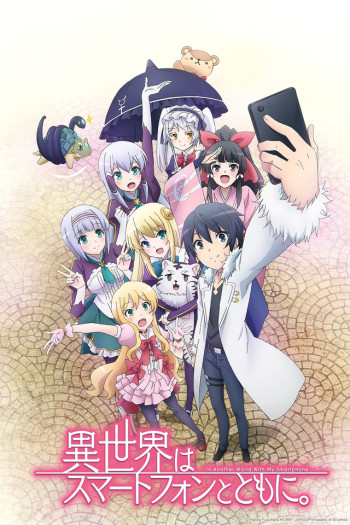 If you're looking for manga similar to In Another World With My Smartphone, you might like these titles.

Although Saikyou is a sudden transportation premise and Smartphone is reincarnation based, they are both normal-person-to-game type stories. Both feature male main characters with unusual powers, although in rather opposite directions - in Smartphone, he is way overpowered, and in Saikyou he is certainly interesting but more like merely irregular than powerful per se (extremely convenient is apt). Both main characters seem like really good guys - quiet, smart types.

When a classroom of students is transported to another world to act as its saviors, Hajime Nagumo finds himself the weakest link. As his friends and classmates are granted strong classes and impressive abilities due to their existing skills, he is given the weak title of Synergist. When a dungeon quest leaves him separated from his group, Hajime must discover his own talents or be left to rot in this world forever.

This is the maqnga not the anime. I assure you start from the beggining of the manga and you'll see how the anime was supposed  to be. I can relate this to In another world with my smartphone,  although its not that much as chill this is more horror and realistic isekai, one of the best isekais in my opinion.

Iris: The Lady and Her Smartphone

Betrayed and murdered by her own husband and family, Iris's life flashes before her eyes - including her previous one in modern times! With this new knowledge, she returns to before she was ever married. Determined to get revenge, Iris seeks help from the most eligible bachelor in the empire, Duke Valenciaga. His unexpected proposition for her: "Go out with me." Why did he pick her, and can this arrangement help her quest for vengeance?

Both of those have a kind of isekai storyline

Meet Kento Oonari, salaryman in hell. Overworked by his bosses, his head surely whirled. He dies, but meets up with a god called Raidel who tells him that he’ll be sent to a new world. Kento's fairly cautious - he’s read this before. And so, to the god, he begs for one thing: “I just want to live a slow life, nothing more.“ Just give me a house and a skill for farming.” So Kento is sent to a medieval age to live a nice, slow life. But what a surprise! The god gave him the powers of a Great Sage! And Kento used magic in front of commoner eyes! So join us today, as we read of this man: His cheat skills, his slow life, and his little girl clan.

Takio Asakawa is an ordinary salaryman who- surprise, surprise- dies and gets reincarnated into another world. A big fan of isekai stories, Takio is immediately ready for his OP slow life adventure. However, when he enters the other world, he discovers that not all is as it seems. Adventure guilds are a relic of the past, and income inequality plagues the country. Technology has progressed to the point that guns exist, making swords and sorcery useless. However, Takio discovers that he has a special skill- with slight of hand, he can steal from others as easily as breathing air. After recovering a woman who claims herself to be the reincarnation of the legendary thief Goemon Ishikawa, Takio realizes that he was brought to this world for a specific reason: to enact justice by stealing from the rich and giving to the poor.

I drew a lottery at the Shopping District and won a privilege to go to another world. After drawing a lot of balls, unexpectedly I got a cheat like skill. Silencing those who are noisy and getting hold of all the things that I want. I will satisfy all my desire.

A Gatherer's Adventure in Isekai

Takeru Kamishiro is a normal guy with an ordinary office job, but finds himself summoned to another world. Takeru starts his new life in "Madeus", a world with swords and magic, fully equipped with multiple skills! Not only does he have enhanced physical and amazing magic abilities, but also the power to "search" for valuable items. With the cheat skills he's been provided, Takeru starts his new adventure in the new isekai!!

My Instant Death Ability Is So Overpowered, No One in This Other World Stands a Chance Against Me! ΑΩ

Awaking to absolute chaos and carnage while on a school trip, Yogiri Takatou discovers that everyone in his class has been transported to another world! He had somehow managed to sleep through the entire ordeal himself, missing out on the Gift — powers bestowed upon the others by a mysterious Sage who appeared to transport them. Even worse, he and another classmate were ruthlessly abandoned by their friends, left as bait to distract a nearby dragon. Although not terribly bothered by the thought of dying, he reluctantly decides to protect his lone companion. After all, a lowly Level 1000 monster doesn't stand a chance against his secret power to invoke Instant Death with a single thought! If he can stay awake long enough to bother using it, that is...