Immemorial Love For You - Recommendations 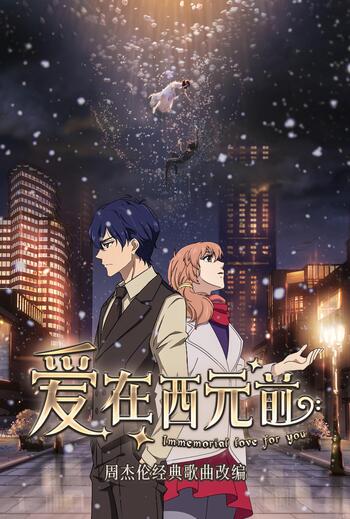 Chiharu isn't a girl who sees the point in things like romance. To her boys are just an annoyance, but what will she do when she starts to develop feelings for a boy at her school?

This is the Happiness and Peace of Mind Committee.

Siren is the absolute queen who administers the state of lakeside park city, which boasts a 99.9% safety and happiness rating. One day, one of the Ondine, the information terminals born from her, gets lost and helped by an uncouth boy named Len Kinami. Ondine feels a warmth from Len, who complains as he pulls her hand along, but that emotion flows in to the queen, who becomes bewildered by the unknown feeling! "Happiness is our duty."

Liking someone and wanting to be noticed by him. With such a thought in her mind, Mayu earnestly read Usausa Divination. It read: "Your lucky items are a rabbit, an axe, and long piece of metal, I think." After buying her lucky items, a strange package was delivered to her house...

Rin Kagamine's childhood best friend, Shun Otonashi, transfers back to her middle school just as she's in the middle of puberty. Shun's demeanor has changed so much since they were young that Rin is confused as to how to talk to him. On the way home from his first day of school, Rin suddenly asks him why he's returned to the neighborhood. He answers, "I wanted to see you again, Rin," as a joke (?). At those words, Rin's heart begins to thunder...

On the stage in the gymnasium with all the students gathered together, Kagami Len declared his love in a loud voice, the spotlight shining down on him. My head spinning from the unthinkable timing of what he shouldn’t have said, even now it feels like I’m about to collapse. As I’m dumbfounded, the root of all evil waves his hand at me, his face beaming with a smile.And so, because of a certain playboy, it was suddenly decided that the plain me’s high school life will end up turning into an uproar.