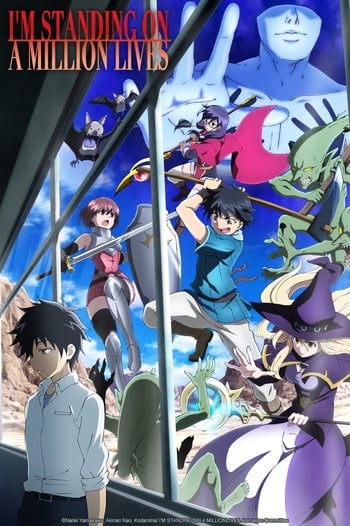 If you're looking for manga similar to I'm Standing on a Million Lives, you might like these titles.

Tomokui Kanata has been re-incarnated into the weakest race, goblin, and given a new name, Rou, after having undergone an unfortunate death. However goblin Rou has retained his previous life's memories, an unusual evolution, as well as blessed with ability to gain status boosts from eating. In this alternate world of survival of the fittest, events unfold. Will a goblin party become the heroes of this world, in a delightful twist from your usual scenario?

Akito wants the stereotypical isekai experience and so he summons himself to another world, however things don't quite go as planned. He's the same unskilled loser that he was before. He can barely scrape together enough money to eat. One day a cute girl approaches him with a contract to join her party. He can't read what it says, but ends up being forced to sign it anyway. What's the worst that could happen?

Caught up in a ritual performed by a God in another world, Eiji Choukai is transported to another world. The otherworldy God responsible for the ritual looked at Eiji’s potential incarnations and pulled out Classes like those from “I reincarnated into a vending machine.” Only, whereas there are normally several tens of Classes available for a person, the only Class available for Eiji was “Parasite”. Having no choice but that set-in-stone Class, Eiji reincarnates into his new world despondent. However, after using his powers he suddenly realized its potential. Using the parasite’s powers, he finds he can amplify himself countless times by obtaining other people’s powers. It could be that Eiji’s level might rise too much.

An exterminator dies and finds himself in a fantasy world, without any skill with the sword or wand he carries on doing what he knows best.