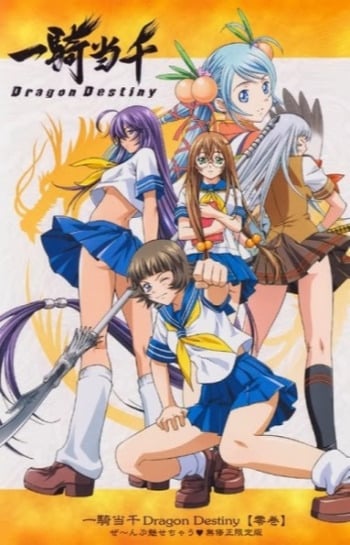 A few years ago, I settled down to watch Ikkitousen: a worthy recommendation with the perverted, martial arts classic Tenjou Tenge. It temporarily satisfied my urge for more panty-flashing, ass-kicking action. For some reason, Dragon Destiny has since been toward the bottom of my list of anime to watch, but maybe the four year delay was a misguided move on my behalf, as I lost track of the plot. Ultimately, the complexity of the Romance of Three Kingdoms element soared above my head at great heights and I desperately struggled to remember which character was a reincarnation of which war lord.

Picking up where Ikkitousen left off, the schools of Kanto are still at warring in an effort to prove their supremacy. As ever, fate and destiny have a strong hand in proceedings and so each player in this battle struggles to overcome their inevitable future. Whereas the first season focussed on the busty Hakufu’s endeavour to contain the tempestuous dragon within, Dragon Destiny pays more attention to the clueless Gentoku – a girl with similar rage issues to the previous heroine. Now far from being bad, it just seems that the plot is a little recycled, as friends are once again left to deal with the aftermath as their once wide-eyed and innocent leader goes postal. The story rattles along at breakneck speed, and those with very little knowledge of the 14th century text that most of the series is based upon will quickly become lost. Like myself.

Reeling in the light-hearted and jovial feel of its predecessor, this season is much darker and perhaps tries too hard to appeal to a more mature audience. As opposed to the serious beatings dealt in 2003, this later incarnation rubs its hands together in savage glee as blood flows freely and characters actually die. Sadly, the faced-paced battles are few and far between, with politics and a more confusing plot taking the lead. Personally speaking, I think a little hand-holding by the writers wouldn’t go amiss, as what little story there is goes sailing right over my head.

Although it seems like I have a downer on the storyline, the show still delivers exactly what it promises; more underwear and cleavage shots than you can shake a stick at and numerous new enemies that certainly spice things up enough to keep the viewer engaged for twelve episodes. Leaving the ending open for a third season, I can only hope that Great Guardians reveals a little more of the more intriguing myth bubbling under the surface of political panty-shots. Hinted at numerous times by wiser characters in the know, maybe they will let the viewer in on the big secret at some point!

Seemingly allowed a bigger budget for Dragon Destiny, there are certain moments that truly shine; Moutoku fighting Kakouen along a cityscape, bouncing off the sides of buildings is lovingly enhanced by a subtle use of CG. The viewer is also treated to the tantalising curves of Gentoku, as they are phenomenally showcased in as many positions as a perverted mind can imagine. Although it should probably count as a negative point against the show, the use of disintegrating clothing during the martial arts scenes is utterly hilarious. Girl receives a hefty left hook? Her shirt explodes to reveal a very un-sports-like bra and over spilling cleavage! Roundhouse kick to the ribs? Marvel as her skirt drifts away in pieces, revealing some adorable cotton panties and a very noticeable camel-toe! The animation is certainly not one of Ikkitousen’s strong points; however it certainly fits the fan-service feel of a cheeky series.

Presenting a truly mixed bag, Ikkitousen features an eclectic collection of upbeat openings and a pleasantly melodic outtro. Unfortunately, some tracks seem a little unprofessional, with the initial song sounding more like it was recorded in someone’s bedroom, the audio just isn’t up to the standard of the other pleasant songs. Luckily, the seiyuu make up for the musical short coming, as they bring to life their characters' bouts of physical exertion. Kan’u stands out especially for me, as she says very little in her extremely deep and husky voice. However, this results in the few lines she does perform packing an extra punch.

Relying less on the clueless, yet busty Hakufu and more on the equally top-heavy Gentoku, it feels as if the events of the first season have been left hanging. Leaving behind the students of Nanyang Academy, Dragon Destiny pays more attention to the much less accomplished Cheng du High, the girls are given an opportunity to truly shine. Ryuubi Gentoku is the stereotypical bespectacled ditz, with an impressive rack and an even more impressive fate. As the surprising leader of the school, her feeble exterior hides a dark and powerful dragon contained within her. Irritatingly perky and naively dense, Gentoku doesn’t make my top 100 protagonists. Her bodyguard Kan’u, however, does; strong and silent, she kicks some serious ass without breaking a sweat. Despite practically being a mute, she shows a surprisingly deep and loyal side, developing significantly as the story progresses.

However, for me at least, Ikkitousen is all about Hakufu and Ryomou, also known as big boobs and eyepatch. They still have some screen time, but it is mostly used to develop an overtly bizarre storyline. Almost added as an afterthought, their once love-hate relationship is shunned in favour of a group love-in, lacking the excitement of what they once had. Sousou, as far as evil villains go, is dull; more of a minor annoyance than a seriously threatening adversary, he drifts through the episodes without building himself up. A shame really, as a good final showdown would have helped the show to a more competitive score.

Ikkitousen, as a brand, is fun, frivolous and overtly perverted. When broken down into its individual elements, Dragon Destiny is probably the dark twin kept hidden under the stairs. Lacking the crude humour of the first season, it attempts to cram extensive amounts of story into twelve episodes of anime. The perversion remains, as do the over-the-top martial arts battles, but politics and verbal bloat distract from what could have been a much, much higher scoring series. That said, my curiosity about the final destinies of the characters is what will drive me to watch Great Guardians...

Well well well, look what we have here. If I'm not mistaken, it would seem like season two of Ikkitousen is almost identical in flaws and features to season one! Here we follow the story of the blue-haired one with the eyepatch and a whole array of new characters as we are once again dropped into what might as well have been the middle of the season for all the exposition we recieve! The characters split up into so many groups every episode that you'll never keep track of them, to discover an object called the dragon jade. This dragon jade, however, seems to be as useful as a chocolate teapot, with characters giving their lives away left and right to prevent some undescribed "end of the world" event that never comes close to happening. Along the way we follow a friendly four-eyed "fighter" who's more into books than fighting! An outrage indeed. What good will intelligence do in this universe anyway? Our fightless friend calls herself a strategist, yet there is no war or any circumstance that would require strategy in this show! Not a single phalanx, flank or even a measly quincunx formation was sighted throughout the season, leading one to believe that this woman only served the purpose of being lesbian bait - a role she plays more often than team strategist. I'm absolutely fuming! Finally we return to the issue of nudity in this show. While there are more observable oppai than season one, they appear to have been added in post, in a fashion akin to George Lucas' Star Wars: Special Edition. Janky jubblies pop up inconsistently throughout the season, making for an excellent drinking game if nothing else!

Overall this season feels like a lengthier, lazier, lesbian-ier version of season one and, while I am thoroughly disappointed, I still have hope for season 3!

Story weak all around nothing good. Many elements are never properly explained, story is missing continual arc and is not episodic either. Nothing make sense. All that can been seen ara the numerous panty shots all over the place which appear to be the sole reason for the anime to exist

animation 1 the fights not only were unrealistic but there were many moments they never touched each other. The fights were nonsensical in animation besides the numerous unneeded panty shots

The sequel to Ikki Tousen. Much better animation, with fight scenes that are more fluid and a storyline based loosely on the Chinese classic Romance of the Three Kingdoms. About the same level of ecchi-ness as the first, with a lot of new characters. And Kanu Unchou gets a lot more well-deserved screen time.