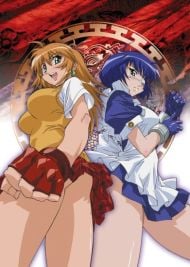 For 1800 years the seven schools of Kantou have fought over supremacy of the land. Their students constantly fight each other in battles to prove their strength. Sonsaku Hakufu is a 17 year old girl that just transferred to Nanyou Academy, and at her arrival, finds herself fighting one of its top 4 fighters. But Sonsaku possesses a soulstone which contains the spirit of a great fighter, and she is not an easy match. When an order is issued to defeat Sonsaku, she finds herself in all out war against all of the schools top fighters. What lies behind this dark conspiracy?

Written for Secret Santa 2016 Look, I’ve watched plenty of ecchi fighting anime where the clothes explode off a girl because someone put chi into a punch. But I don’t think anything prepared me for the middle-of-the-road meh-fest that was Ikkitousen. It doesn’t have the humor-factor that made Tenjo Tenge fun. It doesn’t have the interesting powers that Sekirei or My-Hime brings to the table. It has a rather uninteresting plotline that when looked at has more holes than swiss cheese. I’ll go into more detail below. Story: It starts off simple enough. There are multiple schools that have earring-wearing fighters, and their entire purpose is to beat the snot out of each other on a regular basis and report to the “boss” of each school. New girl shows up, gets into a battle with her school’s elite and after getting hurt, goes Super Saiyan… Oh, because she’s named for this old-time general from 1800 years ago in the Romance of the Three Kingdoms. Here’s where the plot falls apart. The characters are named for war generals, and it’s their “destiny” to fight each other, in fact at the end of certain episodes it explains the history behind some of the fights. Ok, so then don’t name your kid after a war general. Problem fucking solved. No more deadly brawls. Or why aren’t there more Hakufu’s if it’s one of the destined winners?. The second plot hole is if this has been going on for 1800 years, surely they would have arenas for the Great Fighters Tournament? I get that they want to have a “street fighter” vibe with the rooftops and parking garage fights, but with 1800 years of fighting, and the Tournament happening every 3-ish years, you’d think they’d sell tickets to this or something. Oh, and the plot take two full episodes to have onsens and pools because the fanservice wasn’t ridiculous enough. Oh, and rape, a couple times. Never shown, just implied, but still. Sound: The opening is so very late 90’s/early 20s. A mix of jazzy Japanese and English followed by fast paced Japanese rapping. In my opinion, it was as well done as other combinations I’ve heard, and it wasn’t very catchy. The ending is slow and almost feels like it belongs in a romance drama. I don’t think it matched the pace and plot of the anime. I didn’t find Hakufu’s voice acting all that great, and several of the background characters had zero effort put into their voices. The sound affects aren’t bad, a bit exaggerated at times. Lastly, the background music is a tad campy; it fits the overly campy plot, though. Animation: I will say this for the animation, it’s consistent. The proportions of the characters don’t drastically change from scene to scene, like I’ve seen in other fanservice-y anime from the same era coughDearScough. However, the fighting scenes are a lot of still frames or poorly animated moves. A lot of the animation budget seems was for panty shots and almost-nip-slip. Does the animation hold up to today’s standards? God no. Does it hold up to the standards of the early 2000’s? It’s about average for the time period. I’ve seen better, I’ve seen worse. Looking at other titles in J.C. Staff’s repertoire from the same era (Ai Yori Aoishi, Karin, Zero no Tsukaima), it’s pretty standard. Characters: Here, let me show you what the main character sounds like 99% of the time. And the rest aren’t much better. There are maybe 2-3 characters of this entire show that I actually still liked towards the end, and they had bit parts. I didn’t get a chance to hate them.  The main cast was so unlikeable and unfunny that they weren’t able to balance out the ridiculous plot. Due to the plot having a “fight your destiny” vibe, I was hoping for character development on some level. I know, pretty dumb to hope for with this mix of genres… Should you watch this? I’d say no. Yes, it’s one of the longer running ecchi-fighters, but there are better series out there to spend your time on.

Secret Santa 2015 Review Story Panty fights. That ought to be a secondary title or the actual title because that is what this show is: panties and fights. Fights and panties. Panties vs panties as skirts are flapping about and panties are flying in your face with everybody getting flashed and boners about because everybody loves panties and this show has as much panties as Seikon no Qwaser has titties. Or Seikon no Qwaser II. And everybody knows those two shows are the most titty shows on AP. Legends have been made on their tittiness as legends have been made on this show and it's pantiness. Rampant panties ensue. And rampant it is, there is a panty shot per minute of runtime in most episodes, sometimes 3 panty shots per minute and at least 20% of the overall runtime features panties. Flash panties, extended panty shots, upskirts, you name it. A lot of time is devoted to this because sometimes regular fighting isn't enough, and there is about 4 fights that don't feature fanservice. 4 of them in the aforementioned Episode 3. But what you should take home from this is panties. But I totally neglected how all the dudes like Titty Bomber's titties. Mafuyu- Haou (?) has the milkshakes that brings all the boys to the boners as most dudes call her out on them and know them to be quality shit. Like dem titties are the bomb diggity and fo'shizzles their nizzles. This is so that it caters to boob fans and not just panty fiends. And there's like some plot or whatever. These chicks and dudes are reincarnations of Romance of the Three Kingdoms dudes and dudettes, with history and all that good shit. Like how X will kill Y and fate says Z will die to the terminal illness of knife wounds, I've only played Dynasty Warriors 4 so I assume it's all legit and kosher to the history. Guess it can't be all panty fights and no underlying backstory. There's intrigue, some backstabbery and a fight tournament but really, who gives a shit? You're watching a show about panties and fighting. Like, at least 1 fight every episode. Sometimes 3. If something bullshit happened, I questioned it for sure but then I realize that I'm watching a show where the main character willingly goes with some random ass dudes because they said they would feed her or that the previous 5 minutes were 2 minutes of panties. Gotta give it credit for putting effort into plots and shit. All this probably accurate Romance of the Three Kingdoms stuff and the sheer amount of depth they go into it relative to the fanservice amount is impressive. How fate ties into everything, people go with it or defy it... man, that is like some mad deep shit. Props for trying. Animation 240p is turds but 720p is boners. Huge difference in quality and you can really appreciate the panties in an age where panties weren't detailed with all the contours and shit. The show goes above and beyond to give you panties for your buck and apart from that is the jiggle show. Boobs a bouncin' and tits a flyin' as clothes explode and get ripped up because when you fight, clothes get damaged. That's not a negative but a total plus. But what is a negative is how it only does panty shots and very little ass shots. It needs more round, firm booty on display. There are some good shots here and there but way less than there are titties. I absolutely need to give some mad props to two dames, one with long hair, chocolate like skin and an absolute goddess of war. Carries a weapon of sorts and is absolutely perfect in everything. Also a OG by the hardest standard and has a giant proverbial pair of steel nuts. Second is the short-haired U-Chan, gorgeous and an unbelievable fighter. All other dames pale in comparison, even the green-haired, buxom fighter who calls people bastard and never wears a bra. She's great. Sound OP is great, the guy rapping steals the show and the nonsensical lyrics are on par with the course. Never listened to the EP. Dub is on par for the course with subs being better. Sure, it's what we're here for. Characters Titties man, titties and panties. That is like, 80% of the development. Worf effect gets slapped around, Main gal is dumb as rocks and is stupid to boot; Main Guy needs to man up and fight more instead of getting smacked around like a bitch; eye-patch girl gets development of various kinds so is cool; big guy gets dev, is cool; A bunch of douchebag guys who need a punch in the nutsack and there really isn't enough time for panties and elaborate backstories and shit. The point is, you are in no sane way here for shit like development and self-involvement. The alternate title of the show is Battle Vixens. Totally had a sexy cover the last time I saw the manga at the local book store a decade ago. Overall Panty fights. If you like panties, fights, panties and fights, you should watch it. It's dumb, fanservice-fueled trash and I enjoyed it because it's the kind of toothless bonerpalooza you sometimes need. That's all I got. There really are a lot of panty shots in it.

This anime has many good aspects but it does lack some key components. Of course for a guy it would be very entertaining and make a heavy resemblance to the DBZ series. Girls may think of this as an awkward/okay anime. Its story is moderate, the fights are good though. Character development is about 7.5/10.In the end though, this anime is recommended and will be a sure winner for guys. 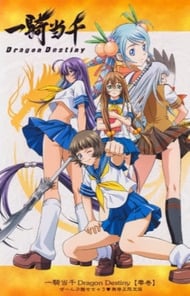 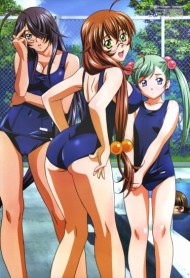 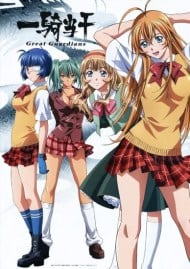 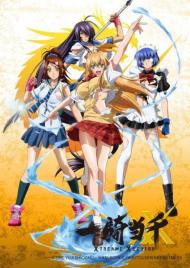 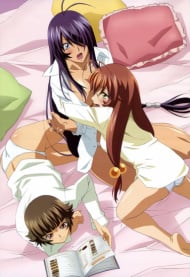 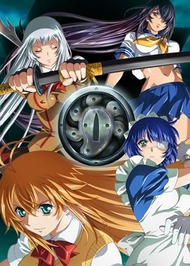 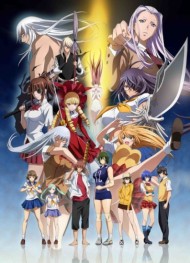 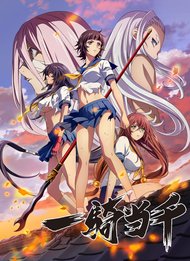 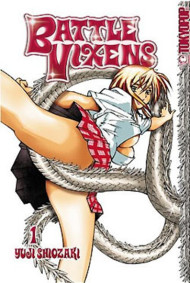