StoryIn the great tradition of teaching lonely, impressionable otaku with no experience of real women that sexual harassment equals orgasm, Iketeru Futari seems one of the less offensive training manuals. It’s achievements are always middling but here at anime-planet, we also reward shows for effort. Although it doesn’t have to, it actually attempts to develop its cast across sixteen five-minute episodes and tries to fire off effective gags. Saji Keisuke loves a girl called Akira Koizumi, a diminutive tsundere who sometimes inexplicably breaks into a rosy-cheeked cum face. He and his crotch have decided they want her, which should be the setup for a tragedy because she’s a tough, emotionally repressed nut reluctant to open up (her legs) and reveal her hidden self (vagina). Much of the time, Iketeru Futari behaves like a no-brainer, no-talent ecchi show, spluttering the usual pretences for T&A. Examples include the one where the girl and boy collide in the school hallway and she ends up on the floor with legs wide open and panties showing. There’s also the one where two girls collide in the hallway and one's humungous breasts knock books out of the other’s hands. Oh! Oh! And let’s not forget that ball game when the female team mates collide in such a manner that Koizumi gets trapped between their bosoms. There’s an obvious pattern here so I will not argue that it’s all random, but there is a large amount of exploitative non sequitur that staunch fans of 'narrative' might prefer to avoid. On the rare occasion, though, Iketeru Futari manages to appeal to the juvenile in me. I will admit to laughing aloud when, having finally earned Koizumi's confession of love, Saji blithely reaches for her skirt yelling ‘Itadakimasu!’ Neither could I suppress a smile when, after Koizumi’s friends tell Saji that the rumours about her sleeping around are untrue, he responds: ‘Thank you. To have Friend A and Friend B say this and care so much about her…’ That’s wit right there. Not brilliant wit, not sharply dissecting wit, but a snigger-worthy acknowledgement of its own contrivance nonetheless. With more ambition and a stronger sense of irony about its fanservice, this might have been the Dai Mahou Touge of Ecchiland. Then again, ambition is a bit much to expect from a show whose target audience is a forest of woodies.AnimationIketeru Futari is visually in a class with Pokemon, or lower if we count the movies. But unlike with the action-oriented Pokemon, I am certain higher quality cel work would only get in the way here. The crude, slapstick comedy would struggle in the rigid format of a Madhouse masterpiece. Visually, the concept must be loose and malleable like the plot; these characters have to look as dumb and mindless as the dialogue they spout. Often, it allows for some marvellously grotesque expressions like Saji’s face filling the frame, tears streaming from his upturned eyes and mingling with the blood gushing from both nostrils as he observes a pair of Koizumi’s panties. It’s not art, but its apt.SoundBoing boing, honk honk, and other classic sound effects recur like a nightmare about 70s porn. Fun liquidy sounds accompany any implied wanking (well, I don’t think that tissue box he is holding while standing above the toilet is for his cold) and when stuff flows from his various orifices. If the soundtrack is anything to go by, I wouldn't trust the creators of this show to compose a pile of shit if guided to a sewer and given a shovel. Only tuneless synth chords and repetitive jingles provide any sort of atmosphere.CharactersAkira Koizumi, an abominable combination of Rei Ayami (Neon Genesis Evangelion) and Taiga Aisaka (Toradora), hates men on the one hand while supposedly getting around like the village bike. 'Sometimes cold, sometimes kind, and sometimes lonely,' she provides fans of this tripe all the allure of being hard to get while leaving them secure in her underaged sexual vulnerability. Unfortunately, we can toss to the winds any hopes of the male lead, Saji Keisuke, offering relief. A dimwit with his mind permanently in the gutter, he crawls around the floor like a wind-up crab on meth just to catch glimpses of his classmates' panties. His running gag is that he can't distinguish between his wet dreams and reality - a sort of complex melding of his subconscious desires and objective fact that immediately put me in mind of Satoshi Kon… if Satoshi Kon had surgically carved out his brain, left the stump, and plugged the rest with cotton briefs. Individually, they're barely cliches but, together, they rise a smidgen above the usual dross of the genre. The poor sod follows Koizumi around one day and despairs when seeing her kissing a former female lover of hers. Conversely, when he discovers that she put a photo of them in her train pass, his pathetic, snotty-faced joy touches a soft spot. He loves her and she responds to him, and they develop a relationship. Yes, somehow this ecchi show manages to find space in the butt cracks of its plot and pull God-honest development out of its arse. By the end, he's more understanding of her insecurities and she learns to trust in his honest but bizarrely sordid form of love.OverallI don't believe Iketeru Futari's aesthetically poor performance damages its general impact or appeal, particularly for its target audience. It's a deliberately cheap and inoffensively crap show, a bit like those Carry On movies you watch on a lazy Sunday afternoon. Moreover, thanks to its brevity, it’s not so much deft at making us laugh, but deft at not making us yawn. Check it out if in need of a cure for Nothing Better To Do.

With the low score I gave this show, low being anything with a rating below 7.5, one may wonder why I even watched the show. The truth is that I wanted to watch something that was ecchi, and possessed a tsundere character. All my requests were granted with this show.            The show consists of 16 episodes that are about 5 minutes a piece. It is SHORT! I finished the series in one day.STORY           The story is pretty cliché. To sum it up in a few sentences: Sex-crazed guy meets girl. Guy falls in love with girl. Situations occur that involve the guy and girl. Girl begins to develop feelings for guy. Nonetheless, the show itself SHOULD keep you entertained.SOUND           Not much to say in the sound department. The show does not have an opening or ending theme. The ending for this particular anime is just a preview of the next episodes title, and sexual pose by one of the female characters. Voices match really well with the characters.ANIMATION           This is one of the fields I have less experience in. The animation style is reminiscent of the 2000s and before that period (ex. Trigun, Di Gi Charat, and Rurouni Kenshin). The movement is fluid, and the backgrounds well drawn. Likewise, characters are beautifully done and character proportions aren’t insanely off (ex. watermelon sized boobs). Personally, I am more that content with the style. :3CHARACTER(s)           Probably, the only reason I got interested by this anime was the fact that is contained a tsundere character. Koizumi is a moé-loli tsundere (One of the best character combinations ever made in a romance anime). Her character is funny and pleasing to watch. In addition, the rest of the characters are an entertaining bunch. (A pervert, A Lesbian, and A girl with boobs that can knock people out)OVERALL           I recommend this anime. It’s funny, it’s cute, and it’s short. There is a bit of a story in the show, but it is minimal. If your like either panty shots, tsundere action, or ecchi scenes, you will enjoy this show! 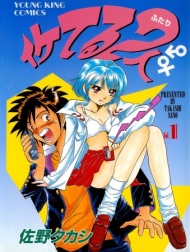 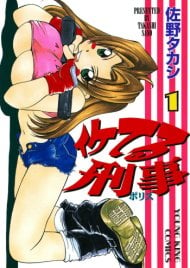