If It's for My Daughter, I'd Even Defeat a Demon Lord - Videos 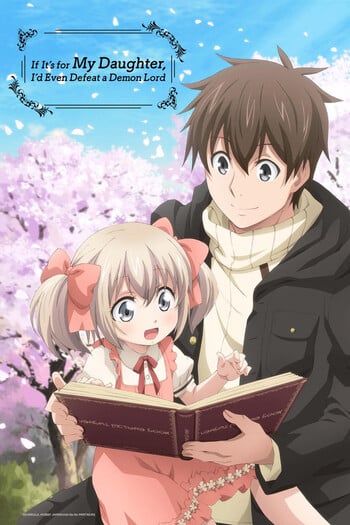 If It's for My Daughter, I'd Even Defeat a Demon Lord Episode 1 - The Young Man and the Little Girl Meet

The adventurer Dale Reki is undertaking fairly typical mission when he finds a young devil girl, with a broken horn. Not willing to abandon her in the wilderness, he takes her back to the town he works out of, to see if he can help her find her way.

The Young Man and the Little Girl Meet

The Young Man Heads Out

The Little Girl and the "Incident."

The Little Girl Is Fascinated by the Snow.

The Young Girl Leaves on a Journey.

The Young Man Arrives at His Home Village.

The Young Man Attends His Brother's Wedding with the Young Girl.

The Young Girl and the Kitty Paradise

Anime-Planet users recommend these anime for fans of If It's for My Daughter, I'd Even Defeat a Demon Lord. All available to watch right here, right now!

Having lost his wife, math teacher Kouhei Inuzuka is doing his best to raise his young daughter Tsumugi as a single father. He's pretty bad at cooking and doesn't have a huge appetite to begin with, but chance brings his little family and one of his students, Kotori Iida, together for homemade adventures. With those three cooks in the...