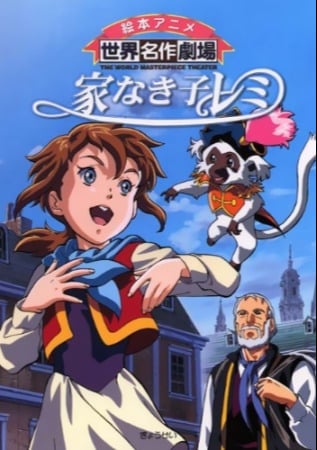 Remy, a cheerful and tender-hearted girl, lives with her mother in a French country town. One day her father returns to the town after a long period working away from home in a city. Her father tells Remy that she isn’t their real daughter, and Remy is almost sold to an evil slave trader. It is Vitaris, a strolling entertainer, who helps Remy. Vitaris discovers her talent for singing and decides to take her in with his troupe. Remy starts her journey with Vitaris and his troupe animals such as the monkey Georicoule and the dogs Capi, Dolce, and Zelbino.

"Move foward; look to tomorrow." Out of all the World Masterpiece Theater (WMT) anime I've been watching, this and "Romeo's Blue Sky" (I'll get around to reviewing that) are probably a couple of the best, most wholesome, and most heartwarming (and heartwrenching) stories.  There were times I laughed, times I applauded, and times when I was crying so hard that I could barely see the screen. Story Remy is a 10 year old girl from the countryside of France who lives with her mother and sister.  One night, their father returns from Paris, injured and out of money, and a secret about Remy is revealed which leads to her "father" selling her off to a child dealer (despite the protests of her mother).  Before she can be taken away, she's saved by a passing performance artist.  From there, her life changes drastically for better and for worse. Characters Remy - An optimistic and energetic girl who was adopted from a young age.  Though she does have the "eternal optimist" sort of vibe to her, it's not over the top nor does it get annoying at any point. Vitalis - The passing performance artist, leader of the Vitalis Troupe, who saves Remy.  At first he's a little hesitant and stern, but very quickly opens up and reveals that he's a very kind and thoughtful person.  He teaches Remy how to read, as well as how to perform with the rest of the troupe members (three dogs and a monkey). Capi - The lead dog in the troupe, and obviously very intelligent.  He keeps the other two dogs, Dolce and Zerbino, in order...as well as Remy. Joli-Coeur - A small monkey in the troupe who acts human and is the star of the performances.  He is also highly intelligent, and takes a liking to Remy. There are more characters whom Remy and the others meet down the line, but listing them here would mean spoilers.  It's best just to see the journey and meet all of the colorful personalities of the cast for yourself. Sound and Animation The music works very well with the animation, though the ending song has sort of a sad tone/melody to it which doesn't exactly fit at times when an episode ends happily.  The animation is very well done, and though there is violence within (abuse at various times, and fighting in the latter half), most of the blows are shown in a way where the viewer doesn't see it directly (doesn't make it any less horrifying, but it means that it's a bit safer for a younger audience). Overall I'd highly recommend this.  I know that they changed the protagonist from a boy to a girl (in the original book, the protagonist was a boy), but supposedly that's all which changed (I haven't had a chance to read the book yet).  But, these WMT shows are really no different from the anime which are based off of light novels when it comes to anime which come from source material. There are a few head-scratching moments I had over the course of the show (about two of them), and another which only works for drama only (so, technically three head-scratching moments) which took away from the slight feel of realism the anime had, but the latter two are little nitpicks. Yes, the first head-scratcher moment I had was during a very dramatic scene at around episode 14-15...but inaccuracy aside, it still managed to take the plot where it needed to go. I presume that most people on this site who read reviews aren't children, so a word for those thinking of showing the anime to their kids:  Go ahead. HOWEVER... I highly suggest that you watch it with them (especially if the kids are under the age of 14) as there are some chilling moments of death, and later on child abuse.  It's best if you can explain to your kids about it when it occurs on screen (or even watch it before you show it to your kids to know what's coming). Despite how awesome this anime is, I really wouldn't recommend it for kids younger than six.  Again, the animators did a good job of not showing blood unless absolutely necessary and not showing any kids actually being whipped (just hearing the noises), but that doesn't mean it isn't still in there (plus, one particular scene around episodes 14-15 will be rough for ALL ages). For those old enough to watch these sort of animes on your own...I really suggest you watch it.  I'd say more, but I have to be very careful what I write here so as not to spoil anything.  Sometimes, I'll include spoilers (and warnings) in reviews I do, but there are other times where you just have to experience it all for yourself. This was an incredible journey with excellent pacing; along with likeable protagonists and dislikeable antagonists.  There will be some cliche moments and things which will probably make you groan, but they can be overlooked compared to the emotional level this series manages to grab you at. 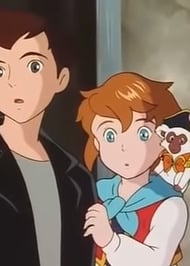 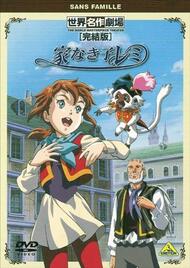