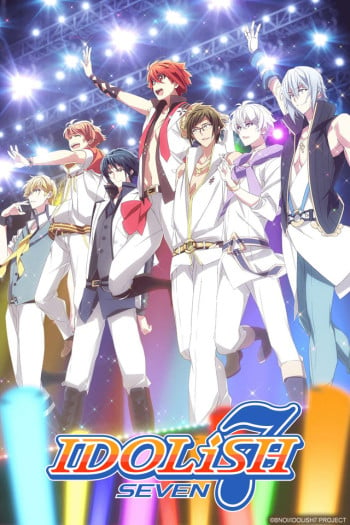 Even though there's only 2 episodes out, I'm still going to leave a review (since nothing is written for the show) for people to read.

I don't remember how I found this show, but I saw the preview photo months ago and was looking forward to it. Found out today it was already releasing and decided to watch it. So, each "episode" is actually around 44 minutes. But it's split up, and you are notified of that when it's halfway through. I don't know if it didn't have an opening because it's only the first epsiode or because they're so long, or even if it will have an opening. Hopefully it will eventually. As for the ending creits, they were lame. (Doesn't affect the show itself, but openings & endings are something I look forward to like everyone else). *That is my ONLY complaint*

I love all the character designs and the art. It has that soft, pretty, colorful, feminine look. The show's art looked pretty good throughout the episode, except for when they were on stage. Looked very CG. Voice acting seemed pretty fine. I really liked all the characters personality & appearance wise. I do know that this show is based off a mobile game (I forget it's name) and I heard somewhere that it would get 17 episodes (?) Of course, I don't know how valid that is, but that's whats being said. I think the storyline is unique, and I think their music is actually good too. You learn a lot about each character within the first 2 episodes.

I reccomend this anime if you just wanna have a laugh and watch some idol drama.

The overall tone is relatively grounded; The idols work for an agency; they act professional in interviews and such; they do things like hand out fliers to promote concerts, practice at their dance studio, and even go down to Okinawa to film a music video.

Given that setting, the plot twists feel super dramatic.

To spoil just one of them-- eventually Nagi (yellow) reveals that he was the one who submitted their music to the company originally, not because he wrote it; it was the legendary idol Zerooooooooo's writer, who met Nagi in [fake country not Switzerland] and inspired him to become an idol before they imply he died? Of? Consumption I suppose?

Just about servicable. Sometimes the characters look cute. The CGI dance sequences, however, look so, so, bad.

I enjoyed the songs. I also enjoyed hearing the WISH VOYAGE instrumental pop in every now and then.

You know what? The characters are actually super interesting and fun. I didn't think I was going to bother learning their names, but I ended up remembering all their weird plot twists and psychological problems even after the anime ended.

Riku - I love his plot twist because like. This was totally unnecessary. Oh my god you stupid little tomato. He's pretty precious.

Mutsuki - literally does not have a talent. They ran out of applicable talents.

Nagi - Hahahah oh my god. This guy is my fave. He's so silly 100% of the time and if you dislike him it'll ruin the whole show for you.

Gre-- who's the green one... Yotsuba? Broccoli? YAMATO - His deal is he's the mature and reserved one. This is fine.

Tamaki - doesn't give a shit about his job! He's here for revenge-- what?? Most of the time he's just bitching and eating pudding, but at one point he goes feral. Honestly a great character who I relate to a lot.

Sougo - Threatened Tamaki with a knife. A pretty nice guy!

Iori - Got Mutsuki into this gig because he's his older brother. Manages things from behind the scenes and looks after Manager-chan. Compotent yet melodramatic.

TRIGGER - Tenn is like, I respect it but what the hell is your deal? Gaku is cool for actually trying to figure shit out. Ryuunosuke understands the importance of friendship. Great trio.

All of these anime are the same these days.  Same characters, same hurdles, same cheesy stuff.

I miss music anime like Kaikan Phrase (did I just date myself?) where what mattered whas the MUSIC and their talents in playing and singing.  They started at the bottom in live houses without a professional manager, clawed their way up to larger live houses on their own, promoted by word of mouth by their fans, looking to be scouted along the way.  The story was grittier instead of pretty boys bouncing around in silly costumes, wanting to be on variety shows and given everything they could possibly want like the spoiled brats they are.  Kaikan, however, destroyed itself when they tossed the newly discovered song writer into a romance with the lead singer that was disfunctional and disgusting... but I digress.

Don't get me wrong, I have watched and enjoyed other shows like this one (UtaPri!), but I am getting sick of the same ol' same ol.  Someone needs to do something different, something harder with less pretty boy empty-mindedness.  Blah blah blah, they'll make it big and defeat Trigger someday, I just know it!  Too predictable.

As someone who has knowledge about idol groups (K-pop) it reflects quite well the reality- with how you have to start at the bottom and have only a few people come to your concert or fan meetings, and how difficult it is to prove yourself to even make it into a group let alone debut. The members have good chemistry as they get to know each other and have clear roles - like vocals, dance, visual, a leader ect, and have a personality which makes them each stand out and interesting. I liked the twists within the episode- some I really couldn't predict either. Overall this is a fresh anime for the season for me, and I would like to see how it continues. I have to also say that the animation is really crisp and beautiful, the chracters look stunning to watch.