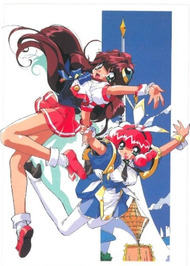 In a world unlike our own, fourteen-year-old Mimu Emilton dreams of becoming an idol. Luckily for her, the search for a new idol is afoot in Starland! During the tryouts, however, she and several other famous idols are whisked away to another world where an intergalactic idol competition is taking place. What better chance for the earthlings to prove their idolness once and for all? With contests abounding and ecchi galore, Mimu certainly has her hands full... but can she become the most famous idol of them all?

982 users are tracking this. Log in to see stats.

StoryUgh. After finishing Idol Project, that's my strongest reaction. Nevertheless, let's start the review, shall we? As mentioned in the description, Idol Project follows a young girl named Mimu as she strives to become an idol. This anime was presumably made because of Japan's obsession with idols, who tend to do things such as singing, acting, or just prancing around in public looking pretty. Mimu, like many real life people in Japan, probably, is obsessed with becoming an idol as famous as HER idol, Yuri. Thus, she tries out at the idol competition in Starland, a place definitely not on our Earth, but then something happens. A trio of three goofy looking aliens snatches Mimu and some famous idols to compete in their intergalactic idol competition, and thus the series begins... Idol Project is high octane to a fault. Unlike series such as Di Gi Charat, Cromartie or Azumanga Daioh, Idol Project tries TOO hard to be random, and quite frankly, I felt like it failed miserably. The action and competitions are thrown in your face at 5,000 miles per hour, leaving no room for you to absorb the "comedy", let alone understand what's going on. I've seen quite a few random comedy type series, so I think I'm a good judge on which ones pull it off well or not. Idol Project, I'm sorry to say, just doesn't. With only a few exceptions, the humor isn't funny at all. There are parodies occasionally, which I didn't find funny either. A great deal of the OVA is extremely ecchi, which I guess was also supposed to be funny. Maybe it's the fact that I am neutral towards ecchi, but I just don't think it's super hilarious to watch Mimu get her nipples poked by several girls, or a naked girl trying to grab her and wash her, or nonstop shots of asses in the air. The plot was unique, so I have to give it at least an above average score, but all in all, I thought Idol Project was TERRIBLE in most ways, including the sorry attempt at humor and the confusing (and too fast) pacing. AnimationThere are two facets to the animation that I think are worth mentioning: the character designs, and the random monsters. First, the positive side: the random monsters. I'm a sucker for any series that has such things, including Jewel BEM Hunter Lime or Hyper Doll. Once the girls are on the other world participating in the idol contest, there are plenty of strange aliens and things to be found. The three main aliens, for example, always hide themselves in strange objects. At one point the three are melded into a park bench somehow, for example. Also, there are giant octopus type creatures, strange robots, and a number of other humorous looking things. I loved this aspect of the animation. However, on the other hand, the character designs were HIDEOUS and some of the most unattractive I've seen. Extremely thick black lines were used to shade the eyes and other features, giving the characters a very fake plastic look. Along with the wrapping paper lookalike hair styles and extremely bad body proportions (round gravity-defying breasts that are spaced far enough apart to look like implants, or pointy breasts with no nipple), I was disgusted by the characters most of the time. In addition they look fairly stereotypical, such as the girl with HUGE glasses, the foreign woman, etc. In addition, the OVA was riddled with *way* too much ecchi, with a panty shot or ass shot every 2.5 seconds. Also, plenty of nipple grabbing/pushing and naked women all over Mimu. Annoying. The colors used were very vibrant and varied, which fit the randomness well. In general the animation was very fast paced, with plenty of magical girl transformation scenes (going along with the parodies). So, neat monsters, but horrible everything else. SoundIf all women in Japan talked like all the women in Idol Project, I'd seriously go on a murderous rampage and kill everyone. Easily some of the most ANNOYING nasal/high pitched voices I've ever heard, from everyone from the announcers to the girls themselves. I wish I could shoot just these voice actors, at least, so I wouldn't ever have to hear their annoying selves again. UGH! I seriously considered changing to the dub, that's how bad it was. The rest of the music was synthy upbeat Jpop, as one would expect in a show about idols. It fit well, but just helped to irritate me even more with all the high octane stuff going on. CharactersThe characters were terribly annoying and stereotypical, which I guess was appropriate given the show. Each girl doesn't develop at all, and just has their own quirks (usually involving something ecchi). The monsters and random things were definitely the highlight of the show, and added a great deal of enjoyment for my viewing. There were various other characters as well such as teams of other idols, but they did little more than take place in some action, then to leave the screen permanently. Unfortunately, the characters annoyed me so incredibly much (both with the voice acting and the irritating personalities) that I can't help but give a poor score, cute monsters or not. OverallIdol Project was terrible. I hated watching it and was surprised I could finish the entire four episodes. If you want random comedy, there are much better things out there such as Di Gi Charat, Azumanga, Abenobashi, Cromartie, and more. I'd only watch this if you are interested in the idea of a high octane idol contest (a story idea that earned this 3.5 points, and that's it). Otherwise, the irritating VAs, poor attempt at humor, terrible character designs and overall suckage just isn't worth your time.