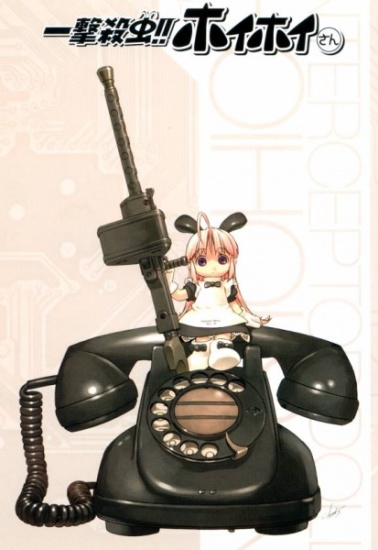 Story
Given the fact that this is a 10 minute OVA, you'll please forgive me if this isn't a long review. That being said, Hoihoi-san is a fairly unusual story about little robots that have been manufactured to kill bugs. Definitely unique in its premise, so it made for an interesting watch. Due to the length, we know barely anything that's going on except that two kinds of these robots are battling each other, as well as the bugs! A fair amount of comic relief is thrown in, and one actual character is introduced, but not much besides that. This definitely seems like it was an intro (perhaps for the game/s) and should be viewed as such, not as a complete storyline. Going along with that, there is no real ending per say.

All in all, a very cute and bizarre look at a problem which (who knows?) may happen in our distant future. Not sure about the realisticness of robots being created to kill the bugs, but hey, it made for an amusing watch nonetheless!
Animation
The animation style was definitely cute and helped with the bizarre feeling you get when watching, given how somewhat dark the storyline actually is! The robots were cute and doll-like, and the colors used were either very dark browns and blacks for night time scenes, or vibrant mixes of colors for daytime scenes. Backgrounds were very interesting, and tended to not have thick shaded lines or much detail. The character (human) designs were the only thing I felt were a bit weird, with huge round eyes that didn't seem to fit the face.
Sound
The audio score is so low because there literally was NO music. Granted, there were some interesting sound effects, but no background music (or intro/outro) to be found. Given the wackiness of the OVA, I certainly think that something unusual could have been thrown in as random background entertainment, but alas, nothing of the sort was found.

Voice acting was ok for the one or two characters involved, but in general, the neat sound effects can only warrant a score of 4 or so.
Characters
I do wonder what it is the Japanese have with robots that have to look like maids (and are females). Besides Chobits, I don't think I've ever seen a depiction of male robots that help around the house or with things (in this case) like killing bugs. Nooo, they have to be female, and wearing maid's outfits at all times. Hoihoi-san was no exception, and was dressed in her outfit of choice.

We are also introduced to one other human character, Kimiko Dewa, who works at a store that sells the robots. We see a bit of comedy about her past, and that's about it. Other than brief interludes with her talking to customers or her friend, we don't see much else of her, but that's to be expected for such a short OVA. Since we don't get to see a great deal of characters, any sort of development, or any real roles, really, I gave this category a lower score than I could have.
Overall
Hoihoi-san is a brief and cute look at a story that you probably won't find in another anime. The length, however, does make it lacking in a few areas, and probably won't be as enjoyable as something that would have even been 30 minutes in length. Regardless, the interesting story and bizarreness make it worth a watch, so check it out sometime.