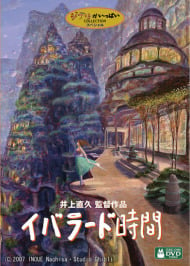 In a lush and detailed fantasy world, magical airships sail amidst floating islands and villas. Luxurious earthly homes lie amidst hillsides of flowers and trees, and a lone pond houses a single shoot of life. Miniature tram cars come and go, ladies’ dresses flutter in the breeze, will o’ wisps dance in the midst of dusk and lights flicker warmly. With a lack of narrative, Iblard Jikan shows us these visions and more alongside a soundtrack of lilting melodies.

StoryI must be honest: reviewing an anime that is a mere thirty minutes in length is a chore. Not only is there rarely enough time to develop strong characters (or any sort of emotional bond with them), but there generally isn't time to develop a complex or compelling story, as well. Now imagine what's it's like to try to review a thirty-minute OVA which has no dialogue and almost no animation! Needless to say, I apologize in advance for the length of this review.Studio Ghibli's Iblard Jikan is comprised of nothing more than a minimally-animated set of paintings by the famous Japanese artist Inoue Naohisa (most commonly known for being the inspiration behind scenes in Ghibli's Whisper of the Heart). There is no dialogue and little animation, save for various water-animating techniques. No story can be found, but the order in which the paintings are displayed - for the lack of a better word - paints a gorgeous picture of individual parts of the fantasy world. Floating islands abound in one "set", while city shots make up another. Thus, we can partially experience Iblard Jikan's world through the imagery alone. Even with the eye candy as a distraction, any semblance of a story is a moot point. You wouldn't watch this for the story, you'd watch it for the paintings; and thus, in the story arena, Iblard Jikan doesn't earn many points.AnimationSo Iblard Jikan is all about the animation; does it live up to its goal? In my opinion, no.  While Naohisa's paintings are admittedly gorgeous in every way, they also look almost identical to each other. Thousands of tiny flowers dotting the hillsides are stunning and all, but after 15 minutes of seeing the same said multi-colored flowers, one can't help but wish for something a little different. In addition, the minimal animation is so crude and abrasively different than the backdrops that it would have been far more effective to leave the paintings as stills. Each scene has some sort of moving part, whether it's ripples in a pond or rain falling softly. These water effects are, for the most part, the caliber of old flash animations; would you want to see flash animations over the top of vibrant oil paintings? I think not. Character-wise, there's the occasional girl or woman who flies or walks into view, but their jerky style of movement and general flat appearances make them seem fake and forced. At times, I was reminded of classic Broderbund game called Spelunx that I played as a wee child; specifically, this came to mind in a scene where a door swings open to reveal blooming flowers within. SoundThroughout the entirety of the OVA, a mild-tempered soundtrack sets the stage for the visuals to come. Being comprised mostly of acoustic guitar-driven numbers, the audio is decent, but is not a good match for the imagery. Rather than Ghibli's typical sweeping orchestral melodies, Iblard Jikan's more rustic soundtrack makes me feel like I'm watching an in-store computer demo from the 90s. Sound effects are well-constructed, though sometimes come across as a little loud compared to the music.CharactersAnother hard category to rate, as there are no central characters to speak of. Literally the only "characters" worth calling out are from a scene where two girls who are tinkering around with some sort of carnival game. The girl on the left passively watches while the girl on the right does various things, and suddenly turns into a creature of light and speeds off into the building. Besides these two, most of the very simplistically-animated characters are on-screen only for a quick cameo. I suppose the scenery itself could be considered a character of the anime, as it's the focus and, in a weird sort of way, has a personality of its own. That being said, there wasn't enough life or motion to make much of an impression upon me.OverallIblard Jikan is wondrous in its own way (at least visually), but will probably not be enjoyed by most people out there. Though I generally enjoy slower-paced anime and spectacular eye candy, Iblard Jikan just didn't cut if. Fans of Studio Ghibli will surely give it a chance based on its origins alone, but will most likely end up disappointed. I recommend Iblard Jikan as a substitution for those "sounds of the ocean" type mood tapes, or to electronic store owners who are looking for something to show off how impressive their HD TVs look. For anyone else out there, I'd suggest giving this one a pass.

Iblard Jikan (Iblard Time in English), is an interesting experience. The best way to describe Iblard Jikan is that it's like looking through a window into another world, and getting a brief glimpse of the potential beauty that the world your looking at offers. There isn't much to talk about in Iblard Jikan, as there is no real plot or characters to speak of, and there isn't really a need for one. The entire short exists just to show a slice of the world it created. What few characters we see are brief cameos by characters from other Ghibli projects that are added into the paintings, as a way of showing that the world you are watching is alive and there are stories going on even if you don't know any of the details. The OVA was released as part of the Ghibli ga Ippai Collection and was directed by Naohisa Inoue. This short takes place in the fantasy world of Iblard, originally depicted in paintings by Inoue, which were inspired by the fantasy sequences of Ghibli's Whisper of the Heart. Studio Ghibli produced this short by digitally animating portions of the paintings and integrating original elements into the scenery. There are a total of eight separate segments, each featuring a different painting or landscape, accompanied by an instrumental musical piece, making it feel like it's a journey all around the world that it's showing to you. The OVA has an original soundtrack composed by Kiyonori Matsuo, all of which match the laid back tone of the artwork. The result is a wonderfully relaxing experience to sit through. Iblard Jikan is the type of media that is hard to give a score to, since it relies only on what the viewer is thinking or feeling. It would be easy to throw around works like "delightful" and "thought provoking", but this experience can't really be summed up by a simple review like this one. And the whole thing is one of those 'love it or hate it' experiences. It's also hard to recommend to everyone since it's a 30 minute art piece that's simply meant to relax the watcher and bring them into the brief glimpses of the world it presents, but I'm sure the audience that it was intended for would get exactly what they're looking for out of it, as it makes for something nice to put on when you want to just unwind, fall asleep, simply something to have in the background.

Iblard Jikan is a ..... visual experience, maybe. I wouldn't know how else to define it. No story no characters. Just a 30 minute slideshow of beautiful paintings with a relaxing soundtrack. Every painting has some kind of small animation going on, ripples in the water, leaves rustling, blades of grass moving ever so slightly to the wind, flowers budding, smoke billowing out from a chimney, clouds dancing in the sky...stuff like that. Sometimes there are old tram cars moving along tracks. And other times there are girls dressed in white or women who appear in the scene, open a window, wait for a tram, jump on some stones in a pond or .... simply fly off in the sky. So just sit back and enjoy this breathtaking fantasy world. That's really the only thing you can do with an anime like this. To me it ended up being a really relaxing experience, if you let yourself get sucked in to the scenery it's kind of like dreaming with your eyes open. 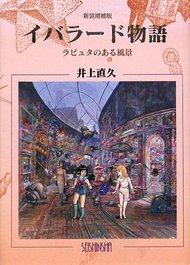