I Want to Eat Your Pancreas - Reviews 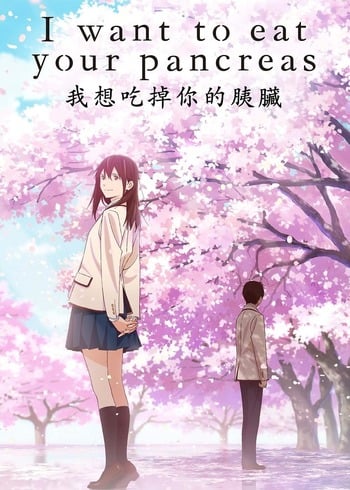 It’s  basically  the cheap thrills equivalent of a heart throb. Yea it does the job, but it doesn’t bring anything new, the writing isn’t particularly inventful, and the execution is good but not masterful. Definitely worth the watch, but no reason to rush to.

Story: 2 main protagonists, one has a messed up pancreas, and the other is a dopey useless guy. Wow, what do you think will happen, well yea there’s a few twists but the effect would be the same without them. So you can basically guess the basic plot within the first seven minutes.

There’s nothing really original except for the Pancreas motifs... I think one of the reasons for this may have been the limitations of the runtime, the ideas that were trying to be expressed couldn’t be developed past the surface level without more time, or resorting to too much intermonoluge. Although better pacing may have helped, it did bouge down in sections.

Animation: The background art, and character designs are definitely above average, but overall are somewhat generic. The chosen style doesn’t add anything to the story, or the emotional impact of certain scenes. The only negatives about the animation were a few scenes of janky vehicle movement, although I doubt most people would notice.

Sound: The music and voice actors are of adequate quality, they do their job without anything extra, exactly like you’d expect from this type of movie. Weirdly tho some of the diegetic sounds just seemed a bit off.

Characters: Sakura is a reasonably developed, and believable character. Her motivations and attitude make sense considering her situation. Although she could of been fleshed out a little more, maybe giving her more back story would of helped with that.

On the other hand Haruki is the generic jerky block of wood character. Like it’s not hard to have character development when you start off with zero personality,  notable positive characteristics, or even basic social decency. There also isn’t any real rational given for this either, he’s just like that, which makes him more of a catrature than a person. Also most of the development occurs right at the end which seems a bit cliche.

The other characters are forgettable….

TLDR: add it to your ever growing “want to watch”  list, and watch it at some point whether that be a month or a year.

The most I've ever cried in my life time.

if anyone is planning to watch this, make sure you have a box of tissues nearby. you'll need it. ;)

This type of story has been tackled by a few animes in the past so in someways it feels a little generic. But it's just so heartfelt and engaging that it never feels forced and therefore the tears that most viewers will shed feel honest and deserved.

Still a beautiful film though, definitely recommended and worthy of your time.

This movie is simply beautiful. It makes you happy, sad, makes you laugh your ass off as well as makes you cry enough to finish a box of tissues. It has its ups and downs, and it warns you from the beginning of what is about to come. This movie will probably be the highlight of 2018 - 2019. It has the story, the music and the visuals to reach Koe no Katachi or Kimi no Na. Wa. levels. All in all, it is a movie that makes you appreciative of the friends and family and the life you have. I know that kinda sounds deep, but I'm pretty sure the movie will resonate with you on that level too. I simply cannot imagine watching this movie again and not shedding a tear, by that I mean it isn't that sad, it just ticks all the right boxes at the right places. Even while I write this review, the scenes all come back to my mind, they remind me a little about the time I saw Clannad or say 5 cms per second or even spirited away for that matter.

I would like to conclude by saying this, watch this movie even if you dislike romance, school life, drama or any other genres this movie touches, for I believe this movie sure will touch your heart.