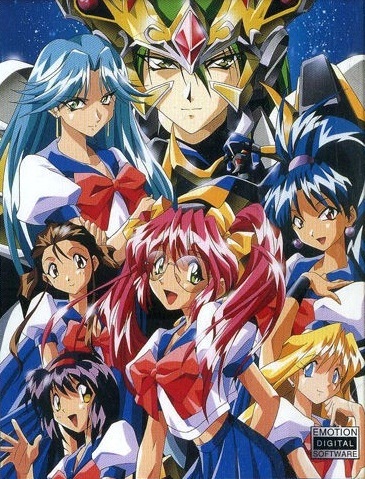 This is just a silly short series that combines mahou shojo (magical girls) with shonen (boys’) armored warriors. It is a nice view but offers nothing in the long run.

ART SECTION: 5/10
It never goes beyond average. We have the usual bishojo (pretty girls) as protagonists and bishonen (pretty boys) as the villains. And a school. And a teenager’s room. And some bath scenes. And a generic alien spaceship. The general artwork is completely clichéd, from the klutz heroine down to the repetitive transformations and special attacks. The level of detail is pretty low, with simple character figures and minimum lightning effects. The best part was the alien space suit; but we only get stale images of it so it doesn’t help much.

SOUND SECTION: 6/10
Voice acting is quite average, full of hyped male voices and squeaky female ones. Sound effects are nothing much. But the music themes are quite catchy as they are full of blood-boiling strength.

STORY SECTION: 5/10
Quite ridiculous and childish, the story is about baby girls taken to Earth in order to be protected by an alien threat. But years later, the aliens attack the Earth in order to acquire their protective and powerful guardian armors. So, as it usually happens, the girls turn to super heroines and fight the aliens. Only this time, it is not a fluffy animal that aids them but a super cool-looking armor. As flavor, we have a vague romance for the leading girl and a sad past for the second one. But even those are the norm of all mahou shojo series. The battles are predictable and so is the ending. At least, the series is only 3 episodes long, so it evolves very fast and ends before it becomes boring.

CHARACTER SECTION: 4/10
Cardboards of 99% of mahou shojo, we typically have the klutz heroine, the preety boy, the serious antagonist, the megalomaniac villain and the hapless parents. Let’s not get into details; they are just what you read here and nothing more. 3 episodes are not enough time to get good impresions out of a generic cast.

SUGGESTION LIST
Tatakae!! Iczer-1 and Dangaizer 3 are very similar series with better plot.
You can always watch Sailor Moon and get the best of what the genre has to offer.