Hyouka: What Should Be Had - Reviews 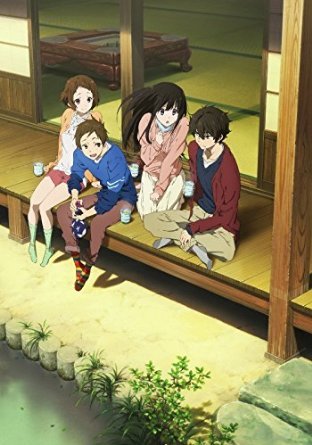 something white on her ear? I would have assumed sunscreen. Why didn't anyone think that? No one even mentions sunscreen. The whole mystery is just dumb. Dumber than the rest.

Welcome to the obligatory pool episode OVA. Hyouka does what every other series does when it doesn't feel like doing something with substance: puts the characters in bathing suits. Oh, there's a mystery. But it is so simple that you should pick up on it immediately. But hey, you finally get to see Chitanda in a bikini, so all's good right?

Don't get me wrong, the animation is still top notch. You'd expect nothing less from a premier studio with a high budget. The sound is just as good as the series. But everything else is a complete waste of time unless you want to see Chitanda in a bikini. Not that I didn't, but also would have rather used some actual something extra. But then again, I didn't think too highly of the series in itself, so perhaps more egregious fan service might have helped.

I suppose that people who like the obligatory pool episodes and Hyouka in general would absolutely love this. Unfortunately, I'm not one of those. I prefer my fan service to be more obviously pandering and my plots to be smarter. So in the end, Hyouka's OVA ended up as something completely forgettable.