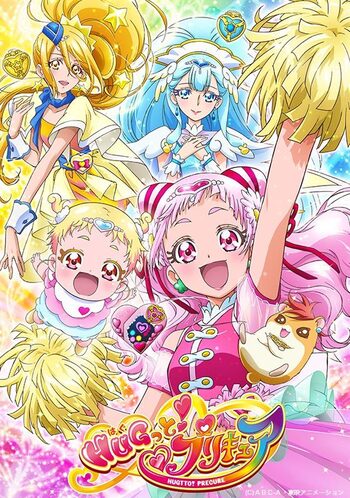 The story so far is pretty good! So I'll give it a 7 for some effort the creators put in. Animation is very beautiful at times and sometimes it can be lazy, like most Prettycure series, but it's also an anime and about every anime has atleast a lazy side. Sound or music is OK the opening and ending and really catchy so thats what brings it up to a 6 but most of the other music isn't great. One problem I have with the sound track is the music that plays when the episode shows the villians it turns into a weird and unfitting side. It gives me a Splatoon® vibe for some reason but over all it's fine. Characters are the same. It's like mix of Kirakira Prettycure A La Mode and Go! Princess Prettycure (in my opinion) The characters are either more "mature", very excited or a new one this season is a bored type of personality which all Prettycure act bored and make "that" face atleast once.

Overall everything isn't bad, it's actually really good. The newer episodes have gotten to me and are amazing for a Prettycure season. But there are a few things that could be worked on.

One thing I really want to say is I disliked Cure Yell at the beginning of this season but over the last few episodes I started to really like her so she picked up from my least favorite Cure (other than Cure Parfait) to one of my favorites (which I have a lot)!!

Thats all for now. I feel that this season will turn out to be one of my favorite! Bye bye minna hopefully this was useful!

I originally had no desire to write a review for Hugtto! for a wide range of reasons, a sort of love-hate relationship I developed over this series of Pretty Cure.

First, the 'good cop' report.  As for plotlines, that produced by HUgtto! was the tightest, best laid out in all the series of Precure, with the possible exception of Happiness Charge Precure.  Following the theme of destiny and the hopes for future, you watch the figure skater who has been stymied in her growth as a competent competitor, cheered on by the cure who is the embodiment of encouragement, Cure Yell (pronounced, for reasons beyond me as 'Ell').  Then we have the daughter of a screen star who truly has all the talent her mother has in the art of acting, but none of the desire.  She, too, has great support from her BFF Cure Yell.  And, ironically, it is Cure Yell, or actually her alter ego Hana Nono, who has moments of low estimation of her own course in life.  She has a simple goal of becoming an elegant lady, but has little impetus to push forward in this. She is more than capable in doing this, but lacks the confidence.  It is for her friends who have benefited from her spiritedness to keep her in good spirits in those moments of doubt.  Throw in two more pretty cure, symbols of love and friendship, who outwardly are not likely prospects of befriending the other.  One is an android (Lulu Amour, who is better seen as a gynedroid, a girl android) developed by and for the use of one of the most belligerent corporations on the planet, the other (Emiru) a girl a few years younger than the other pretty cure with a pushy personality which makes her stand-offish.

Now the 'bad cop' report.  I find that I am in total disagreement with the central philosophy which drives the same plotline.  Much is made of the thought of mugendai, the limitlessness of potential.  I find that, with all the "hooray everyone, hooray me!" pouring out of Cure Yell, I find that there are limits to what one need accomplish.

This falls into place in the climactic episode 48, where Hana Nono comes face-to-face with her nemesis George Kurai.  It is the battle between the hardened pessimist versus the engrained optimist.  I find both of them in error.  I find that Kurai is correct in his assessment that the future can go badly.  Too many factors can crop up to spoil the best laid plans for a better future.  However, his solution of creating the best possible situation and freeze time at that moment so that there is an eternity of happy oblivion preventing the imminent sadness the future will offer ... that's nuts.  But I am unconvinced at Hana's proposal of seeking the sparkling future tiredlessly, acknowledging that failures do happen, but need not be the final destiny of mankind.  While failures can be subverted, it is the nature of failure to promote misery, and the notion that happiness is swept aside by failure makes true optimism dicey at best. I am happy that Hana overcomes Kurai's line of thinking, but her personal happy outcome (motherhood in 2030) is not universal.  Many lives are crushed by failure, and 'hooray everyone, hooray me!' cannot set aside the personal hurts of others.

This, and the total dissatisfaction at the introduction of the first male precure, Cure Infini.  I thought that the first male precure would be a little more virile.  I see the facial rage a pretty cure as she rages against the forces of evil and darkness and icky-ness (you can see this in any Pretty Cure movie), and I can't envision Cure Infini displaying this level of furor.  this, and the gender confusion the character breeds.  It seems that the only boys worthy of cure-status must be more girly than anything else.  This why I hated episode 19 and the slogan "Every girl can be a hero ... every boy can be a princess."  Why not a prince, the suitable role for a boy who dreams of better things?  YOu see, I agree with the first half of the proposal.  Girls can make excellent heroes and role-types.  But a boy must find the role of princess better than that of prince?  If pushed, this is sexism, a girl's role for a boy as preferable than a legitimate male role.  That, and the notion of insult.  A genre that would wish a boy to be reduced to a milksop to be suitable character ... that's feminist arrogance!

Hugtto is a mixed bag of grandeur cluttered up with eyesore.  I see the irony of the friendship of Emiru and Lulu, one being years older and more mature than the other, only to have these roles reversed in 2030.  For Hana to realize her place in the future as a successful business woman and expectant mother, whose child is delievered by her friend, the young acting hopeful who discovered pediatrics her true calling.  And the father of Hana's baby ... a mystery.  Do we even meet him?

Good endings always help me decide the merits of a series.  Hugtto! made me think about the twists and turns that come when the future greets the present and allows us to ponder what the best course in life will be.  So many decisions.  So many factors.  So many possibilities, and we are limited to so few.  A strong theme, though a story that got controversial in points.  It makes for good theatre ... and outstanding anime.