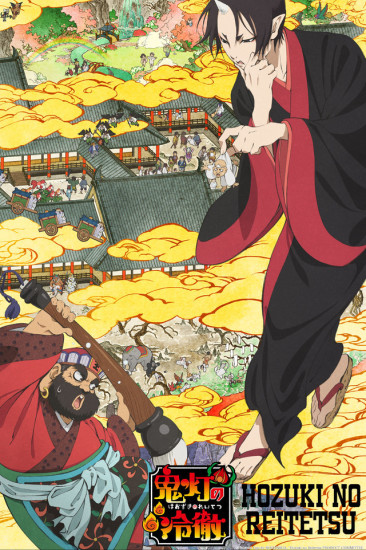 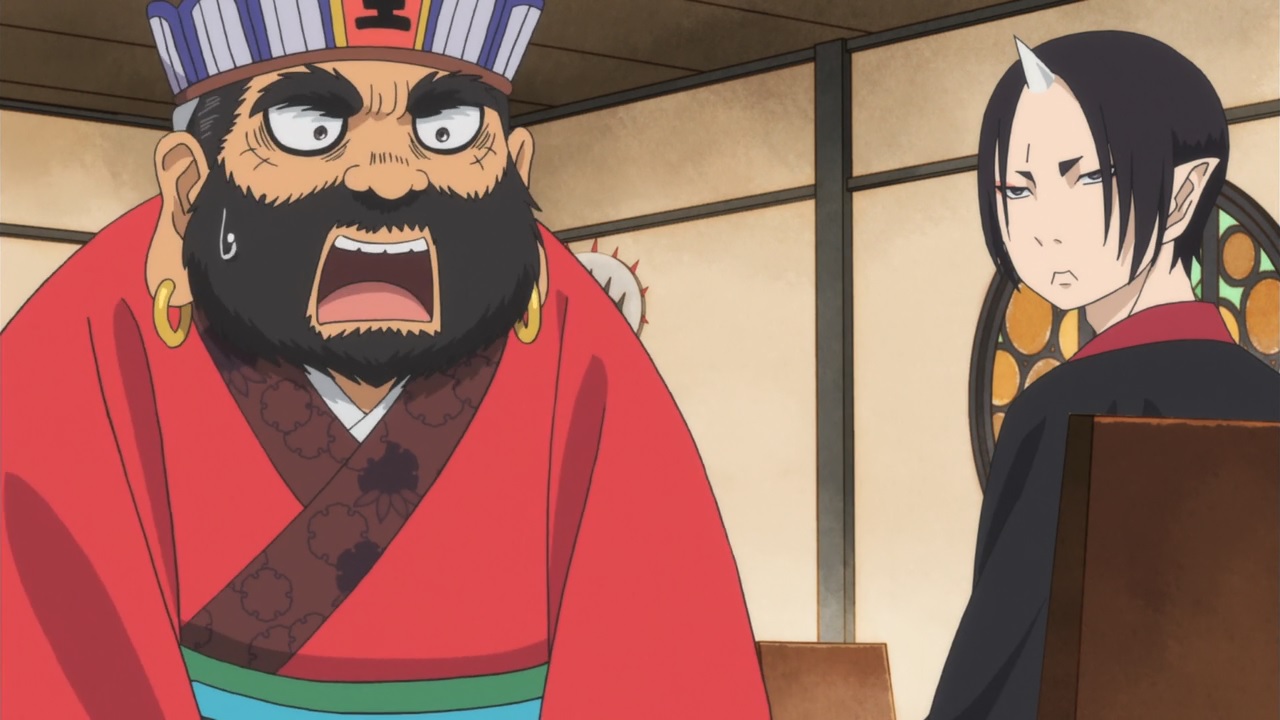 Hoozuki is the aide to the Great King Enma. Calm, cool, and super-sadistic, Hoozuki tries to resolve the various problems in Hell. However, he also enjoys spending his free time on his hobbies ... such as fawning over cute animals and raising his Goldfish plants.

Hoozuki has this laid back atmosphere that you wouldn't expect from an anime set in ... well ... hell. It's not in your face comedy but, there are a few episodes that made me burst into outright laughter! Overall I think the intention was just to make you smile or chuckle a bit ... and for me it did that and more. The first time I heard the OP I make a face like -_-" The OP is absurdly cheerful for an anime set in hell and at first I didn't care for it. But it grew on me ... kind of like mold >.<"  I actually love it now and I had begun to look forward to hearing it every episode ... go figure lol. The ED though was akin to torture, but again ... if you take into account where Hoozuki is set ... it fits! xD

The characters were fun! Hoozuki scared the sh*t out of more than half the characters but that added to the fun!  I loved the rivalry between Hoozuki and Hakutaku. That was endlessly amusing to me! :D Hoozuki was a badass!  Enma was a funny character in the way he was supposed to be 'The Great King Enma' and yet ... Hoozuki was totally the one in charge! (Enma just didn't quite realize that fact!) xD

Overall a very laid back anime that I enjoyed a great deal. I miss it! :( 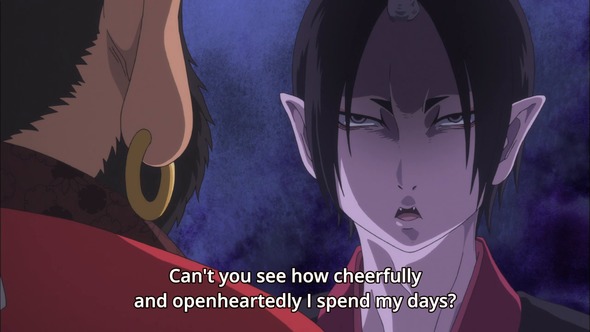 Do you like crazy, over the top humour and Japanese mythology? If yes, then this is the perfect anime for you. No, seriously, don't even bother reading the rest of this and just get watching. If you prefer your humour less sadistic and insane, then seriously why are you even considering an anime with so many tags relating to it? If, however, you need a little more persuading, then you've come to the right place. There's a great review right above this one, go read it, it's... ok, ok, just kidding. I feel like I should probably stop waffling and actually get on with the review.

Hozuki no Reitetsu is a rather over the top comedy, with a lot of physical homour. It really doesn't differ much from others of that genre, other than it being in hell. It doesn't particularly break any boundaries, but it's still a funny ride with some interesting and colourful characters.

Hozuki's one of those weird characters that kind of seems to be pretty two dimensional, but actually ends up with quite a bit of depth. He's a total sadist, very coolheaded (as the name of the show implies), and all round generally awesome. He's very much the main character, and the show really focuses on his interactions with the other characters rather than focusing on the other characters themselves. I won't go into too much detail about them all, otherwise we'll be here all day, but they're all interesting to watch, if a tiny bit two dimensional.

Overall, this is a great watch for fans of ridiculous comedies. It's funny, with interesting characters, and you get to learn a bit about Japanese hell along the way. What could be better than that?

Since Hoozuki no Reitetsu is a seinen (geared towards young adult and adult males) commedy, one can safely assume that the job of this anime is not to keep little kids entertained.  If you find yourself feeling like, "This isn't that funny," or "This isn't very interesting," then you are probably, mentally or physically, a little kid.  Probably a little boy, because little boys love complaining about how anime that went over their head was "not very good."  If you fall into one of these categories, you should probably stick to something simpler than Hoozuki no Reitetsu.

This is an anime that kept me interested and amused the whole time.  Not like hysterically laughing; this isn't Nickelodeon or Cartoon Network.  The humor is in the characters and in the conversations they have and the situations they land themselves.  At the first episode, I wasn't so sure I was going to really like the series, but my feelings quickly changed.  Hoozuki is an oddly charismatic and adorable character, and he's so funny partially because he's unpredictable.  He's calm most of the time, but when he's not, you're never sure what's coming.  His work-dynamic with Enma is also amusing.  By the time I finished this anime, I was dying for the second season and a little sad that I don't live in Hell.  I'm looking for a giant poster of Hoozuki to go on my wall, too.

The story is meandering.  There isn't a real storyline other than daily life in Hell, because this isn't a shounen anime where everyone only has one life goal that's going to take up all of the screentime.  There's a relaxing feeling to watching Hoozuki tend his goldfish flower garden, meet new people and go about solving Hell's many problems.  A few times every episode, some seriously funny or surprising shit happens that makes the show all the more worth it, but there's a lightly comedic feeling to just about everything, from the weird sonds the goldfish flowers make to the casual mentionings of torture to the simple things, like Enma's gut being too fat for him to pick up his fallen pencil.

The art and animation is beautiful.  The general visual feeling of hell is that of woodblock prints and ukiyo-e paintings, slightly similar to Mononoke, ultimately making Hell seem like a strange, beautiful and complex place.  The characters--and there are many--are not bursting with immediately apparent complexity but instead are normal people (most of the time) going through their everyday lives, showing their personality and querks over time.  Another nice aspect of this anime is getting to know the characters.

I completely disagree with recommending Noragami and Gugure! Kokkuri-san in relation to Hoozuki no Reitetsu.  The only thing they have in common is a focus on Japanese folklore and commedic themes, but the commedy and atmosphere in shows for younger audiences is different and will leave many people disappointed if they are looking like a show like this one.  And I do not understand why two people recommended Gintama for people who like Hoozuki when they have almost nothing alike whatsoever and when comparing Hoozuki to Gintoki is like comparing apples to elephants.  Ticks me off when people want to reference every anime back to some shounen title, as if all Japanese animation revolves around adolescent boys.  Blech.

What I Liked: The ending theme and the equally catchy opening theme. The character designs, which felt like simplified versions of classic mythological depictions, were all unique and colourful. There was a nice uniformity in set designs for each of the hells, and many of the backgrounds had a classic Japanese art feel to them. Animation was consistent and just as colourful as the cast. A nice mixture of cultural / mythology-related jokes, silly puns, physical humour and satirical allusions to Japanese society. Hiroki Yatsumoto is perfect as the stoic yet strangely charming Hoozuki.

What I Didn't: Like most skit comedy anime, the show simply ends. YMMV on the humour, depending on how much one knows about Japanese culture and history and/or enjoys gallows humour. The humour is a little hit-and-miss anyway, with some skits suffering from slow pacing issues or generally weak jokes. The second-last skit may have functioned better as an ending in this reviewer's opinion.

Final Verdict: Irreverent, dry and dark but nonetheless hilarious, Hozuki's Coolheadedness can best be described as "colourful" - it features a lively cast of characters with interesting personalities living in a fascinating depiction of Japanese Hell making a variety of jokes about a number of cultural subjects. Sure, sometimes the jokes fall completely flat, but I found it an otherwise enjoyable and unique skit comedy anime. After all, who knew Hell could be so fun?

This is a dark comedy anime that pokes fun at Japanese folklore, religions, legends with a few jabs at the European after life, specifically hell. In fact this takes place mostly in Hell.

It helps to know a bit about folklore and Japanese religion, but it is not needed. This anime is a HOOT. I have made it a point to hit the pause if I am sipping my soda or tea. Too many times I almost choke laughing.

The art is fantastic. Like an ancient scroll comes to life. The style and attention to detail is amazing.

The characters are funny as.. as hell.

I can't recommend it enough.