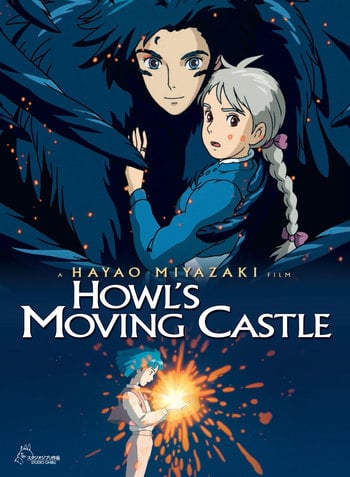 Howl's Moving Castle is based on the novel of the same name by Diana Wynne-Jones although the 2 differ greatly. Sofie is an average young girl who works hard for a living until one day she is turned into an old woman by a wicked witch. With nowhere to go and no way to avoid her family, an aged Sofie sets out across the treacherous 'Wastes' in an attempt to find a way to rid herself of her curse. Along the way she encounters a hulking, steam powered, Baba Yaga-esque castle which turns out to be the home of Howl - the legendary wizard, and his assistant, Markel and their fire... yes, fire, Calcifer - a wise-cracking demon with a lot of attitude. Sofie moves into the castle as a cleaner, but as the story continues she finds herself enrolled in Howl's mad schemes, terrifying the locals and ultimately, capturing Howl's heart.

Story - 7/10 - Doesn't have the depth and intrigue of its source material but an enjoyable concept nonetheless.

The story is a nice once. I say 'nice' because I genuinely can't think of a better way to describe what is basically a very simple, linear fantasy story. While the plot has some enjoyably unique twists and an utterly fantastic steam punk/fantasy setting, it just a little too glorified. It's a romance, with a predictable romantic subtext and a fantasy, with a typical fantasy subtext. It's typical in the least typical sense of the word, but only because the characters are not the typical fantasy characters. Sofie isn't 'stunning and radiant’; Howl isn't 'charming and handsome', well... he isn't charming, and the castle isn't some grandiose Disney villa on top of a hill - it's a mishmash of scrap metal and bits of cloth. What Ghibli have done with Howl's Moving Castle is taken half of the things that made the novel such a treasure to read and thrown them at a Beauty and the Beast screenplay. This film really epitomises why people call Miyazaki the 'Japanese Walt Disney', and you'll understand that if you've ever read the original little mermaid story.

(Spoiler for those who haven't... She kills herself.)

Don't remember that? That's ok; you'll get the same feeling if you watch Howl's and then go off and read the book. As a standalone film it is really great, but you can't help but feel you've been cheated if you've ever read the book.

The animation on the more recent, high press Ghibli films is certainly a force to be reckoned with. The character design is crisp and fresh while the backdrops are as decadent and majestic as one could expect from a fantastical steam punk setting such as this. As with all Miyazaki movies, Howl's Moving Castle makes use of simple scenes. There will be an onslaught of dialogue or action followed by a shot of ripples on a lake, or the wind blowing through the flowers on the wastes. These tiny 3-second moments of clarity may seem redundant to some viewers but they provide, not only a moment in which the viewer can contemplate the film and what has happened so far, but a testament to the abilities of every artist and animator involved in the film. A nice piece of trivia for you to consider while you take in the scenery folks; everything on Howl's Moving Castle, with the exception of the castle itself for logistical reasons, was painstakingly drawn and animated by hand. That's right, every time a flower dances in the wind or the water twinkles under the sunlight, someone in Ghibli team did that without the aid of a computer.

Sound - 8/10 - English voice actors lend themselves nicely to the characters while the Japanese audio is well acted. Beautiful sound score with very emotive pieces that compliment the film.

The most notable thing about the sound on Howl's Moving Castle is the score. Composed by Joe Hisaishi (the composer behind the scores for Nausicaä, Laputa, and Totoro among others), the sound score is compelling and emotive, complimenting the setting and plot of the film perfectly with a combination of string and piano arrangements.
The English voice cast is a solid one featuring the talents of Christian Bale (Batman Begins, The Dark Knight), Emily Mortimer (Notting Hill), Billy Crystal (The Princess Bride, Monsters Inc.) and Crispin Freeman (Hellsing) among others. Each voice actor gives their character a fantastically unique personality; making them more lovable (or hateable) and generally boosting what would otherwise be a fairly lacklustre collection of characters (script-wise). The Japanese voice cast is equally as strong and impressive, for those interested in watching it in its native language.

Characters - 7/10 - Lacking in depth but still provocative and beautiful.

The characters, as previously mentioned, are a little lacklustre, not because they are bad or because the voice actors are useless, but because the script is weak. Howl specifically seems to have lost something in translation from Wynne-Jone's novel to the big screen as he comes across as a self-absorbed, narcissistic wimp. Sofie is either nonplussed about everything or in a fit emotion, leaving me wondering if the curse on her has affected her hormones. The main 'bad guy' of the film (no spoilers here folks) also comes across as a little lacking, though by no fault of the voice actor. The only real saving grace for the characters is Calcifer. Voiced by Billy Crystal, this little fire daemon really shines (no pun intended) among a myriad of basically average characters. With snappy dialogue and an adorable comedic streak, Calcifer really makes the film. As much as the main characters tend to fall short, they do have their little moments of clarity, assisted by a well written cast of support characters.

Howl's Moving Castle is a fantastic, beautiful, moving film and though it is, by no means, the twisting, fantastical creature that the novel was, it is nonetheless well worth watching. A definite Miyazaki classic, as long as you take it with a pinch of salt when you compare it to its source.

Just a simple disclaimer before I begin: I understand there is a book tied to this movie. Unfortunately I haven't read it so this review is from that perspective but rest assured I'll be reading the book fairly quickly.

It's not often that I give an anime 10/10 let alone in every category, but Howl's Moving Castle deserves nothing less. From start to finish I was awed and amazed by the beautiful scenery and captivating characters.

I loved every single detail of this story. If magic and mystery suits your fancy than this is the movie for you. From the beginning you're intrigued by the relationship between wizards and normal folk and the introduction of magic along with captivating animation really pulls you into the story of young turned old Sophie and the dashing Howl. The plot isn't all that complicated but it doesn't need to be. The story is interesting enough by itself with plenty of humor and adventure and a touch of romance.

Brilliant. I had heard of the magnificent Studio Ghibli but had never really experienced the magic that these artists can create on the screen. Everything is simply gorgeous from the scenery and towns to the individual characters, and of course the moving castle. Every little detail is just perfect. I guess what I'm saying is I loved it.

I don't often pay much attention to this category, which you may know if you've read my other reviews, but I can't give this movie anything less than a 10 and rightfully so. The music simply added to the magic and didn't distract or annoy me at any point in the movie. Oh! And although I don't typically like his acting, Christian Bale's voice is pretty smexy as Howl.

I've already expressed my love for the animation but without brilliant character designs the animation would mean nothing. I immediately fell in love with Howl, but how could you not? He's dashing and daring and a wizard, what's not to like? Sophie is actually pretty interesting too even though she's supposed to be a boring and plain girl. She's quite funny and her brave attitude towards magic and Howl makes her a very likable character. I could go on and on about each character and what I liked about them, but you can just watch the movie and see for yourself, but honestly I didn't dislike a single character.

As you can see I love this movie 100%. I'd recommend it to anyone especially those of you who share my love for magic and animation. It's a wonderful story filled with magnificent characters that I'm sure you'll love just as much as I do.

Another time, another review.

I absolutely love love LOVE this movie, it's my favourite Studio Ghibli movie of all time.

The story is so immersive; you are in Sophie's life, you see her perspective and hear her thoughts. Each of the characters are so intriguing and entertaining, especially Calcifer, Howl's rather outspoken fire demon, "She likes my SPARRRRRK!".

The animation is so beautifully done, the art work is fantastic; softly drawn, pitcuresque views - you want to be part of Howl and Sophie's world.

It has a brilliant soundtrack, one of my all time favourite songs is the main theme song by Joe Hisaishi, even so much so i learnt to play it myself. The soundtrack is definitely worth purchasing.

I've watched it an uncountable amount of times now, it's so inspiring. It's one of those movies that brings a smile to your face and excitement your senses, you just want to go back for more.

I'm sure any Studio Ghibli fan would fall in love with this movie as much as i have.

I give the anime high marks for creativity and having some of the best animation in the business, but the anime seems to be lacking a plot and characters to back it up. There is no focus in the story and it seems to be just throwing random events and beings/creatures at us with no ryhme or reason; there are side characters that also go no where and there motivations change in a instant. It's a shame, because we have the world, the set up and the creativity, but we don't have a strong and focused story to go around it. Spirited Away was random, but there was still an overall story and the main focus was getting her home and turning the parents back to normal; Howl's Moving Castle at first seemed to be going that direction, but it quickly abandoed it... It's far from a bad film, but it seemed like an amazing film was trying to get out of an above average film. More in video review: http://www.youtube.com/watch?v=NqMEZSPBr9E