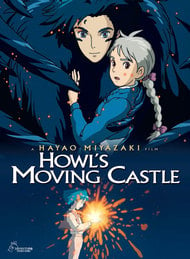 An adaptation of Howl's Moving Castle by Diana Wynne Jones

Just a simple disclaimer before I begin: I understand there is a book tied to this movie. Unfortunately I haven't read it so this review is from that perspective but rest assured I'll be reading the book fairly quickly. It's not often that I give an anime 10/10 let alone in every category, but Howl's Moving Castle deserves nothing less. From start to finish I was awed and amazed by the beautiful scenery and captivating characters. Story- 10/10 I loved every single detail of this story. If magic and mystery suits your fancy than this is the movie for you. From the beginning you're intrigued by the relationship between wizards and normal folk and the introduction of magic along with captivating animation really pulls you into the story of young turned old Sophie and the dashing Howl. The plot isn't all that complicated but it doesn't need to be. The story is interesting enough by itself with plenty of humor and adventure and a touch of romance. Animation- 10/10 Brilliant. I had heard of the magnificent Studio Ghibli but had never really experienced the magic that these artists can create on the screen. Everything is simply gorgeous from the scenery and towns to the individual characters, and of course the moving castle. Every little detail is just perfect. I guess what I'm saying is I loved it. Sound- 10/10 I don't often pay much attention to this category, which you may know if you've read my other reviews, but I can't give this movie anything less than a 10 and rightfully so. The music simply added to the magic and didn't distract or annoy me at any point in the movie. Oh! And although I don't typically like his acting, Christian Bale's voice is pretty smexy as Howl. Characters- 10/10 I've already expressed my love for the animation but without brilliant character designs the animation would mean nothing. I immediately fell in love with Howl, but how could you not? He's dashing and daring and a wizard, what's not to like? Sophie is actually pretty interesting too even though she's supposed to be a boring and plain girl. She's quite funny and her brave attitude towards magic and Howl makes her a very likable character. I could go on and on about each character and what I liked about them, but you can just watch the movie and see for yourself, but honestly I didn't dislike a single character. Overall- 10/10 As you can see I love this movie 100%. I'd recommend it to anyone especially those of you who share my love for magic and animation. It's a wonderful story filled with magnificent characters that I'm sure you'll love just as much as I do. Another time, another review.

I give the anime high marks for creativity and having some of the best animation in the business, but the anime seems to be lacking a plot and characters to back it up. There is no focus in the story and it seems to be just throwing random events and beings/creatures at us with no ryhme or reason; there are side characters that also go no where and there motivations change in a instant. It's a shame, because we have the world, the set up and the creativity, but we don't have a strong and focused story to go around it. Spirited Away was random, but there was still an overall story and the main focus was getting her home and turning the parents back to normal; Howl's Moving Castle at first seemed to be going that direction, but it quickly abandoed it... It's far from a bad film, but it seemed like an amazing film was trying to get out of an above average film. More in video review: http://www.youtube.com/watch?v=NqMEZSPBr9E BBFC rating - U 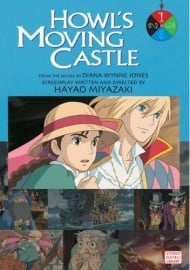