How Heavy Are the Dumbbells You Lift? - Recommendations 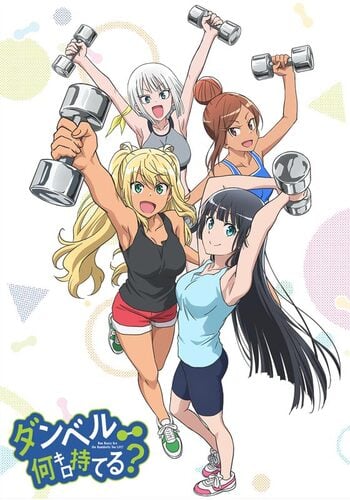 If you're looking for manga similar to How Heavy Are the Dumbbells You Lift?, you might like these titles.

Saotome-kun is admitted into a school full of gyarus and meets a delinquent girl named Hanako Kuzuryu.

The Gals Police are two sexy police women that will arrest anyone that gets in their way of being lazy. They barely do their job, but no one can deny their beauty and attitude. Nicknamed the "Poli-Ne" ("Police Sister"), these two only think about their own beauty and clubbing while arresting the petty criminals of Kashiwa-city.

Gyaruko-chan always speaks her mind, which may not be the wisest decision in all cases, but it's never short of entertaining! Meet the exuberant and unbelievably busty high schooler, Gyaruko, as she traverses the ups and downs of adolescence with spirit and verve, alongside her best friends--the anti-social loner, Otako, and the unpredictably honest, Ojou.

Giya Ruko is a gyaru girl who is always at odds with the Public Morals Committee rep Shindou Tadamichi because of her tendency to show off too much skin against school regulations. In one instance, she taunts Shindou to just adjust her clothes for her since he's so damn worried about it... which he surprisingly does, with immovable determination and seriousness. How can she prevail against a boy who'd go through such sincere lengths to preserve her dignity?

High school boy Tsubasa moves to Kitami City up in Hokkaido, where he meets a "gal" at a bus stop. The sight of her standing alone against the white snowscape, bare-legged despite the freezing cold, captures his heart.

Kurokiya Ruu is on the verge of repeating a year so her childhood friend Tadashi Tadao steps up to teach her. However, they end up not getting any studying done as she uses this situation to try and seduce him at every turn.