This anime started out with so much promise, was actually doing something different, but now? Now it's just another stupid harem isekai and i'm done. Maybe i'm being harsh, but such is the contrast between what the show is trying do (looking at the real world issues of running a nation albeit in a fantasy setting) and the absolutely moronic implementation of the harem trope into the show. Early on they establish the idea that in this world marriages are polygamic with the wives and husbands sharing equal standing and are each free to marry as many partners as they so choose. Now you don't need to be some sort of economic genius to see how this just would not be allowed for tax reasons alone but take this to it's logical conclusion and you could have entire nations where everyone is married to everyone else and the union holds utterly no meaning at all, legally or otherwise. And before someone tries to suggest that this is being inclusive or progressive in someway please note that we NEVER see any marriages of this nature other than with the protagonist himself (and that's a one sided pologamy between him and several women, so really even that doesn't count)! In the first part tho this was just a stupid idea (with no thought put behind it AT ALL), a way to force the harem trope into an anime that DOES NOT NEED IT cause that's what you do with isekai fantasy anime, ain't it? It's in this part, this season, that the idea takes off into true lunacy as they actually start implementing it for the protagonist who is a HEAD OF STATE! At this point Souma is now engaged to: the daughter of the former king, the daughter of a tribal chief and his personal bodyguard, the daughter of a prominent noble and the daughter of the king of a annexed nation. Now you don't need to be some sort of political studies student to know that this would not be in any way politically viable AT ALL, and would in fact render the usual benefits (and responsibilities) of political marriages utterly null and void (for once again you take this to it's logical conclusion Souma could go onto marry EVERY single daughter of EVERY nation in this world!). So yeah, i tried my best to overlook this stupidity but after episode 4 they just kept piling on and on and on, practically 4 episodes in a row has been largely dedicated to this utterly absurd idea in a show with the world "realist" in the title! And it really is a shame as when this show was looking at the inner workings and issues of running a nation it truly was interesting and unique. 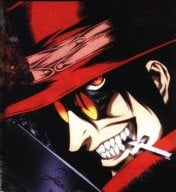 So, in the end I've decided to watch this season after the disappointing first one. This time, I abandoned all my expectations brought about by the hope around the source material (light novel), and just decided to see if at least the show got better in terms of romance/harem/characters. The short answer is yes, the show did get better. Unfortunately, the full answer is: the show did get better, but not much. It doesn't really make the first season worth watching. This time, I'll write a shorter review that focuses on two things: comparing this season with the previous one and a few words about this specific season. Story: 4/10 The story is a bit better in this season because most of the grand events have been concluded, so it's time to deal with the aftermath, some minor events, and characters/harem, which leaves the viewer with smaller expectations to be dashed (although I'll admit I already expected the harem part before watching due to reading other reviews of S2). It's a good thing that we get more focus on harem—it really needed it. In the previous season, we just get random waifus added one after another. This time, there's more focus on those relationships. Sadly, the execution is still pitifully bad in a sense that we first get just small snippets, and then we get half an episode (or was it a whole episode) that instantly brought us up to date on a bunch of development that apparently happened off-screen because we see almost none of it happen in the show until then (I admit that that half an episode was done in a somewhat interesting way, but it doesn't make up for the half-bakedness). Only the last episode somewhat lived up to normal standards. In general, I got a strong feeling that I was dealing with a show that adapted source material that had lots of slow character relationship development spread over a big amount of text in small bits and pieces (as is sometimes the case in light novels), yet the show just took some more important events, and left out all the "petty" details, which were nonetheless what gave soul to the said development. In other words, the adaptation was a failure—they should've employed a more fully encompassing treatment of the material they were adapting instead of thinking it'd be okay as long as they adapted the main parts. This doesn't only refer to characters and their relationships, as in general a lot of this S2 was kind of a hit-and-miss in terms of plot, where we deal with important events at one time, and then they waste half an episode on triffles that could've been handled much quicker and better. For example, this was the case with the medical episode and slavery episode. There was also some crap as in the S1—poorly executed events. This is a bit of an inadvertent pun because my example is how they killed some inconvenient nobles (weird implementation of Macchiavelli stuff again), but nobody cared afterwards, neither to praise nor condemn this supposed act of tyranny. A considerable plot hole. Imagine the prime minister killing all opposition party politicians in your country and nobody cares. Animation: 6/10 I feel like the animation was considerably better in this season, but maybe it's because there were no action scenes, so the budget wasn't as tight (or they had no opportunity to screw up)? I don't think there were any obvious problems, though I also feel like I'm forgetting some scene... Sound: 5/10 Neither good nor bad, just like previously. The only major difference is that instead of incorporating songs directly like in the first season (which I honestly found cringy), they picked a subtler approach of using them as BGM only (with one acceptable exception). Characters: 4/10 I've already mentioned the harem in the [story] part, so I won't repeat myself. I can at most add that waifus are still poorly characterized in the series. The same goes for the protagonist. He isn't as bland as many isekai MCs, but he has no real charisma except for the moments when he makes official decisions and issues official orders as a king. It's nice though that he grew into his role a bit more compared to S1. Generally, characters were just as bland as in the previous season. We also had missing characters (like the former prime minister, who was supposed to stay in some role in the court, but only appeared once I think, and that, too, was just a brief a flashback or something). Still characters, but now it's going to be spoilerish. Curiously, of the 5 talents from the first season, the wolf-eared loli completely had no screen time (are they waiting for her to grow up to join the MC's harem?), and the fat dude didn't appear much, either. Of course, the two talents who are in the harem had sufficient screentime. I appreciate, though, that our new prime minister finally got some time to appear. I also like that he's developing some ship with empire's general. It's just sad that that ship got so little attention. I think it's great to see some ships besides MC and his harem in a show, so it was a wasted opportunity. Also, the annoying brat and annoying fox girl were gone in this season. Good riddance, both were redundant and unpleasant to watch. Overall: 5/10. I don't recommend, unless you enjoyed the first season. If there's a third season in the future, the chances of my watching it are very low. I only bothered with S2 because it was already out in full. Perhaps I'll give the light novel a try a few years from now after I mostly forget this failure of a show. 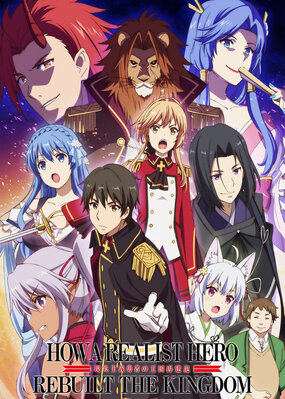 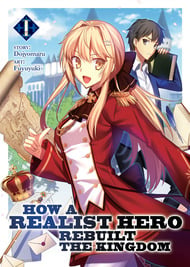 How a Realist Hero Rebuilt the Kingdom (Light Novel) 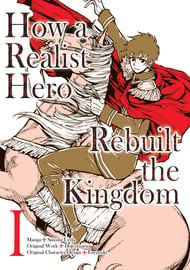