Alt title: After School in the Teacher's Lounge 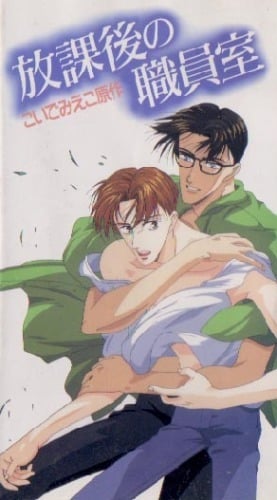 Oh dear god, this was terrible. Bland characters, a story that's all over the place, and crappy animation - Houkago no Shokuinshitsu is just a mess.

So, the story is two male teachers falling in love. Sounds ok, and it probably would be, if the story didn't keep jumping around so much. Most of the scenes aren't properly linked, to the point where you think they may have accidently left out parts of the anime. In fact, had I not been so sure there were only two episodes, I would have sworn there was at least one other episode between the first and second, that's how little they link everything together.

Ignoring the fact that the main characters seem to change personality between the first and second episode, they weren't too bad. Just very bland, two dimensional and frankly annoying. To be honest, I'm not sure they could have been much better given how all over the place the story was.

It's not like the animation can even redeem this either - it's just some terrible 90s animation.

Basically, avoid this at all costs.

Really boring. The whole thing is like a cartoon version of a stereotypical student film.

Characters all look boringly the same. All the character's heads are too small for the bodies. The whole thing is really uncomfortable to watch.

Sound effects at points were too loud and all msot drowned out the voice overs, and the wasn't many of what sound effects there were!