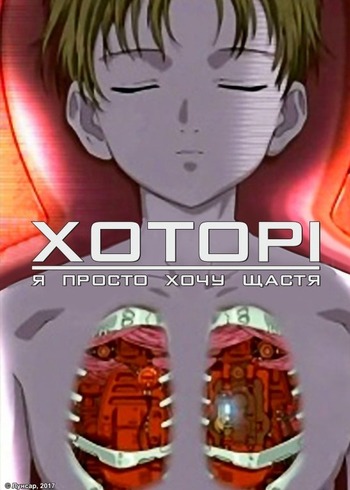 The story of Hotori: Tada Saiwai o Koinegau follows a young robot boy named Suzu and his blossoming friendship with a girl named Hotori.  Suzu was created to become a boy named Ryou (a boy who had passed away) and thus has been undergoing various psychological experiments in order for him to gain Ryou's memories.  This, of course, takes a toll on Suzu as the brain can only handle so many memories at a time.  Meanwhile, Hotori is having the opposite problem: her memories are disappearing.  Although the disease she suffers from is never named, it's almost like a very slow form of amnesia.  The contrast between the two and the middle ground they find together is the cornerstone of the anime.

For only 40 minutes, this anime packs a punch.  It didn't have much time to get its message across - and it definitely could've dived into some deeper subjects that happen later on - but it is definitely a short film worth watching.  After all, it's only 40 minutes and it won't be a waste of your time whatsoever.

The animation was a little nostalgic for me, actually.  It reminded me a lot of the older anime, back before CGI took over and everything began to look the same.  It's not necessarily stunning and there weren't any scenes that stood out to me in particular, but it was well-done and easy on the eyes.

The sound was pretty lovely.  The score was somewhat sad throughout most of the anime, which suited the theme and message perfectly.  It was an above-average soundtrack.  There's honestly nothing more to say here.

The characters were pretty slim.  We really only have Suzu and Hotori to dissect and we only have them for 40 minutes of screen time, so giving them a proper rating is a bit difficult.  From what I saw, they were likable, interesting and as flesh-out as could be.  I wish that we had gotten more backstory on Hotori and I wish we had gotten to see the ramifications of some of Suzu's decisions later on, but...well... once again, we're only given forty minutes.

Overall, I wouldn't call this a masterpiece by any stretch of the imagination.  A masterpiece would have been able to "wow" me within the 40 minute time slot provided.  But...while this didn't necessarily blow me away, I did enjoy it and I did enjoy what it set out to do.  If you have a bit of free time and want to watch a short - yet meaningful - anime, I'd definitely give this one a go.

*This review was written for the Daily Anime Marathon Club (DAMC).  Check it out!*

So this is a story all about a young boybot who is slowly but surely being turned into a vessel for a dead boy. One day his baseball decides to be the most errant plot device ever and flings itself into a house/sanatorium/hospital thing(never told me what it actually is).

Inside said sanatorium thingy he finds a young girl, who basically has either epilepsy, strokes or severe alzheimers, which makes her forget her memories every time she has an episode. They quickly become friends and have larks around the place, also there is not a single person in this place aside from them.

She takes him to her special place, which is not a metaphor, its a greenhouse where they play with marbles and have a laugh, she also finds a gun! Then tells the young boybot to kill her with it if she ever forgets who she is or who he is.

Long story short she has an episode, wanders up to a roof and trys to jump off, boybot saves her and breaks the shit out of his knee in the process. The next day he returns to her, gun in hand to shoot her like she asked, shoots up instead like they usually do in this case and its over. BUT its not, she dies anyway and has her partially complete memory thingy put into the boybot too so they both live forever together.

Story: So there not a lot, but they really go hard on the "omgerd this girl is like super ill" within two minutes and its super forced.

Animation: Considering this is from 2005 the animation and fact its in 4:3 is really concerning, but its Sunrise so not surprising.

Sound: Barely noticed it so im saying it's a-ok.

Characters: Semi-fleshed out on the MC's but lacking for the Dad and Brother, the nurse is actually the most well rounded character despite her screen time.

Overall: Not bad, could have been a lot better given what it was.