Horus: Prince of the Sun 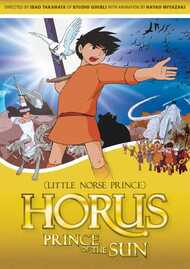 Grunwald, an evil demon, is threatening the fantasy world of old, and only young Horus has the power to destroy him. Armed with the legendary Sword of the Sun (that he plucked from the shoulder of a rock monster, no less), Horus must make new friends (including the beautiful siren Hilda and a whole town full of villagers) and overcome treachery and hardships to defeat the evil Grunwald and restore peace to mankind!

Story Adventures of Horus is a fairly generic tale of a young boy who must overcome various challenges to defeat a trademark evil being. The story has nothing to do with egyptian mythology, so if you were interested in this title because of the name Horus, turn back now! The beginning of the movie reminded me a lot of the beginning of Future Boy Conan, with a boy witnessing his father dying, and being told to run off to find others of his kind. After this point, Horus runs into the great demon himself, and it seems that the story will be exciting and action-packed all the way through. Unfortunately, this is not the case, and for the most part, we don't even really see Grunwald for most of the film. Horus runs into a village, and we see a great deal of his daily life (slice of life style), with a few misadventures here and there. The most important addition to the story is Hilda, a young cursed girl who loves to sing, who has a hidden agenda of her own. Unfortunately, all she really brings to the table is a bunch of songs that sound the same, and not much besides that. I don't know, I just wasn't moved by the story at all. I don't care how long ago this was made, it surely could have had a more compelling or unique story. For the kiddies, this probably would still be an amusing watch, since it's full of Disney type things such as talking animals, random chorus-type songs that pop up all the time, and generic fantasy. For anyone else, however, I don't see how the plot could be interesting or inspiring in any way. Near the end of the movie I was becoming so incredibly bored that I had to take a several day break to finish it! A 5 for the story, due to nothing exciting. Animation Visually, it's very difficult to give a score, due to how old the movie is and the quality that I saw it in. For its time, I'm sure the visuals weren't half bad, perhaps even good, which is why I gave them a higher than average score. That being said, I still wasn't terribly impressed with anything about the visuals, so I can't score them any higher. Character designs almost reminded me of something Osamu Tezuka would make, with swooping hair and huge eyes. The animals were very cheesy looking, especially the wolves (which reminded me of Wile Coyote, to be honest). Other animals such as the owl looked very Disney-like, and probably would amuse the kiddies. Colors used were mostly very drab greens, browns, and blacks. There wasn't a huge amount of detail, and the action scenes were decent. I don't know, I'm pretty torn on this. Since I am not an expert of anime from this time period, I can't help but base the score on what my first impression was, which was "not impressed, but probably good for the time". Sound The audio was trademark early Disney, with chorus lines that sounded fairly ridiculous all the time. I really disliked the music style, but I don't even think anything else was really around in those days for kids' movies. Voice acting was pretty cheesy for some of the characters, sounding way too kiddie for their parts. Everyone else seemed to be OK, but again, nothing memorable. I wish I could write more in this section, but like the rest of the movie, I was uninspired. Characters The characters, though fairly two dimensional, still were effective for their roles. Horus, for example, is a young boy who has endured hardships and rises above his fears to achieve victory. Hilda is probably the most deep character of them all, with an interesting and dark past, and challenges she must overcome. The townspeople also had their own unique roles, and you remembered who they were and what had happened to them (a rarity in most children's movies). In some situations, you felt bad for them when hardships occured, and it was interesting to watch the downfall of some. The only character that I really felt like wasn't developed, was the main bad guy himself! We saw him very little throughout the movie, and not much happened to justify WHY he was so evil and needed to be defeated.  Overall Overall, Adventures of Horus was pretty forgettable. The plot was uninteresting and unexciting, the animation was dated and not very impressive, the music was cheesy and in general, it was a generic watch. If you are looking for something to show your kids, this could be a decent watch, but if you are over the age of 8 and don't have unlimited free time, I can't see why this would be worth wasting your time. Was it terrible? No, but it definitely wasn't fantastic by any means.

When I first saw this on Netflix, I was compelled to watch it due to short-term commitment.  I mean, it's just a movie, I could've finished it in less than two hours.  But no, that didn't happen.  It took me more like two weeks. The beginning of the movie was off to a very slow start.  The whole entire film I had to remind myself that it was a 1960s flick and was an anime pioneer.  I even took a really long break, about a week and a half, from watching it because it was so slow.  Nevertheless, about 30-45 minutes in, I finally started to see some character development and actual plot! Although it kind of sucked at first, by the end I was really glad I chose to watch it.  A perfect example of classic anime.