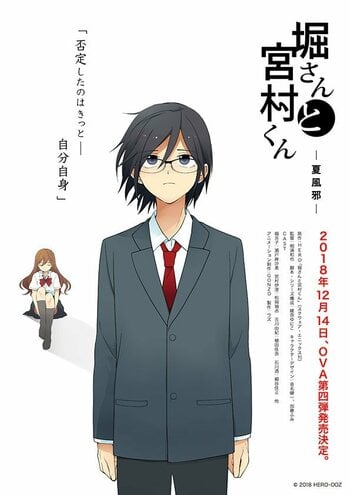 Tatsuhiko Shiroyama hates being stuck in the boonies. Greetings from strangers feels fake, part-time job prospects are limited, and he's been "blessed" with the nickname "Niyayama" from his classmates due to his creepy, unsociable attempts at smiling. He turned to the radio as a means to escape, and thinks about nothing more than saving up for a move to Tokyo where he can explore his passions. But Tatsuhiko's life changes forever when he saves a rich CEO from a rice paddy and is set up with his granddaughter, the equally as shy and antisocial Tamiko Mita. Together, the two stumble through the nuances of "dating", and Tatsuhiko's dreary days become a whole lot brighter.

"Won't you please... create a manga with me?" The girl I fell in love with at first sight loves horror manga!? How will the love story of these opposite two unfold...?

Ao-chan's delusions of H explodes because her fathers a sensual novelist. Although it is a kiss end with my lover's wooden mallet, I will stay in the same apartment in Fukuoka at the same time as entering university! At last when I thought that our indecent days would begin... Ao-chan's mother appeared!?

Noda Haruko has hatched a plot to get tasty lunches; she's put a love letter in a paper airplane and tossed it out into the world. By chance, it ends up in the hands of a lonely boy named Katou Seiji. Haruko confesses her "love" for him, and her hope that he'll become her husband and make her delicious lunches. Surprisingly, Seiji agrees, and becomes her boyfriend-chef. Seiji allows himself to be swept away by her childish enthusiasm, but he keeps trying to find ways to make their relationship more 'real'-- by holding hands, kissing, or simply being alone together. Haruko and Seiji navigate their unusual relationship among their friends and classmates, who all have their share of comedic troubles!