StoryAnyone thinking Tengen Toppa Gurren-Lagann is studio Gainax's first attempt at paying homage to the shounen genre should check out Blazing Transfer Student for some reeducation. Granted, 'reeducation' might be strong language when referring to an anime that thrives on doing everything exactly the same way that all others of its kind do it, but considering its bizarre obscurity (to the extent that Gainax fails to list it on its website), it does have that 'hidden history' appeal. Arriving at his new school in the opening sequence, the hero Noboru Takizawa meets a burly hall monitor with a quiff called Jonoichi, who promptly tells him he's late. Being a decent sort of chap, Takizawa has an excuse: his teacher told him to wait so he was only following instructions. 'If your teacher told you to die, would you do it??' roars Jonoichi, disgusted. ' If your teacher told you to eat a rock, would you eat it??' By this point Takizawa has sunk to his knees clutching his head, wide-eyed and groaning, and the viewer begins to realise that these are not just reprimands but attacks. For anyone still in doubt about the show's intentions, Jonoichi then attempts to finish Takizawa off with, 'If your teacher told you to smell a dirty sock, would you do it??' The crux of Blazing Transfer Student's humour is to ask: 'Recognise this? Isn't it just stupid?' Its scenes are exaggerations of established tropes, cliches, and rituals whose fascination lies in the fact that they're so meticulously etched out even as they appear ridiculous. At one point Ibuki the school bully boxes Jonoichi over who can get the female lead Yukari as a trophy - we know this because she walks into the boxing ring wearing a sign around her neck that says 'trophy'. The challengers are huge, their hair huger, and in no way resemble real high school students. All the while geeks in the audience narrate what's happening in awed, breathless voices. Anyone who has seen Hajime no Ippo, for instance, will find much of its material nailed to a tee, although that's actually because Blazing Transfer Student is taking the piss out of that other well-known boxing series from the 1970s Ashita no Joe. (And at this point a cynical person might start wondering if all sports anime aren't in fact exactly the same...) The problem with Blazing Transfer Student is that it so successfully mimics its source material that it could just be another terrible shounen show. Apart from the extra insertions of farce, there is little to distinguish it from the rest. It lacks the layered wit of Ouran High School Host Club, for example, which lampoons shoujo's obsession with pretty boys while simultaneously embracing it. Ouran makes its numerous bishounen archetypes empathetic even as it exposes their prettiness as nothing more than a cheap gimmick. Blazing Transfer Student, on the other hand, lacks the creativity to do the same for shounen. As a deconstructive comedy it works, of course - being a fan of shounen, I cracked a smile whenever I thought how seriously I took these cliches in other shows - but it never reaches the point of being revelatory in its own right.AnimationNo fear, Gainax intended Blazing Transfer Student to look much older and of poorer quality than a typical 1991 OVA. In fact, the animation zealously adopts the crude, kitchy idiosyncrasies of the 1970s, many of which are still staples of the shounen genre today: streaky backgrounds, thick black outlines, spikey hair styles - which is funny because I'm watching the numbingly tacky New Getter Robo at the same time - and lots and lots of dramatic poses. No one would call it pretty, but as a salute to an era it looks fascinating.SoundEverything from the gloriously self-fellating opening theme to the protracted shrieks of frustration infuse this brief anime with more delightful cheese than could ever be found in one-hundred episodes of Naruto. This is a soundtrack figuratively on crack and its voicing is an enticingly awful mess.CharactersI acknowledge that Blazing Transfer Student's short running time precludes any substantial character development and its very success as a spoof requires that Takizawa, Ibuki, and the rest embrace their stereotypes. Nevertheless, the fact remains that, for all their wild antics, they just aren't endearing enough. Mindless and shallow, the characters fight and fight and fight, only pausing to shout the title of a special move or an insensible curse. Rather than making the cliches their own, they merely become empty vehicles for them.OverallMore harmless than Bastard!! but with a similar talent for farce, Blazing Transfer Student will prove an uplifting injection into anyone's anime menu. It does not fall into the 'so bad it's good' category - I don't believe it would appear any funnier when drunk - but rather plays as a straight satire that delivers the essence of shounen with an important side order of irreverence. 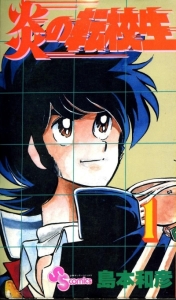