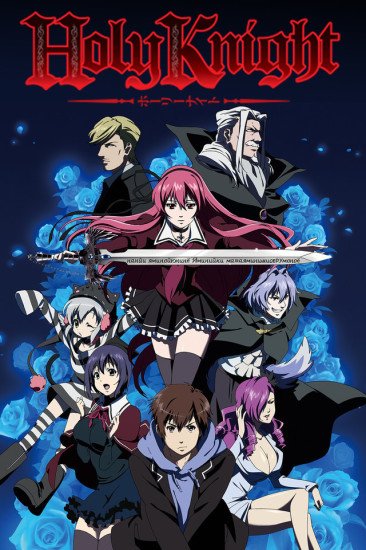 Rosario to Vampire and Holy Knight share the familiar story of a female vampire coming into the life of a human boy. Holy Knight is more serious than RtV, but they both include ecchi, various types of supernatural beings, and a complicated romance. If you enjoyed one, you may enjoy the other.

Both Holy Knight and Rosario to Vampire feature a Vampire Female-Male Human couple (of sorts) and in both series the vampire unexpectedly appears in the human male's life (from their perspective at least).

Let's face it, you NEED more pink-haired vampire school-girls in your life. And when the rest of the cast is mostly female with few exceptions, the male lead is just swimming in mammeries and panty-shots. So, while the plotlines are quite different, the atmosphere of the anime is very much the same. So, if you liked one, give the other a shot.

Holy Knight and Dance in the Vampire Bund tell the story of a female vampire and her complicated relationship with a boy of another species. Both are somewhat dark in story and animation, but they also include some ecchi to 'liven' things up. The heroines of Holy Knight and Vampire Bund share a goal they want to accomplish, but with their romantic troubles and other supernatural creatures lurking in the night, it won't be easy. If you liked one, give the other a try.

Both male protagonists are decendents of monster/vampire slaying families. They fall in love with a monster/vampire(half) girl who they are allegedily are mortal enemies with.

In Holy Knight, the half-vampire wants to bear a child of the male protagonist, because of his genes and who he is.

In Kemonozume, the monster girl truly likes the male protagonist, and learns later that he is a monster slayer from the warrior faction.

I very much enjoyed Holy Knight, if you did too check out Kemonozume! Holy Knight is an OVA and short, but does have a manga! Kemonozume is an older anime, however I remember how fantastic the story was when I watched it, so if you liked either animes, check out the other!