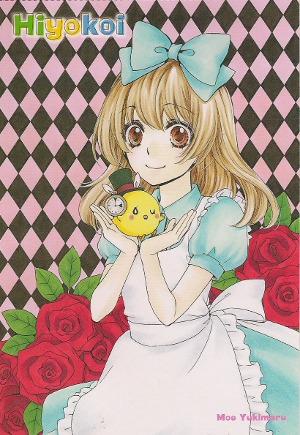 Warning this Review May Contain Spoilers

Hiyokoi, I adore the manga of this series and I was so excited to find out that there was a adaption for it, but this honestly was a bit disappointing. It was just so short and it felt like it could of done with being a longer or just being a longer series.

It was a basic romance school story, but it was all over with so quickly it was just ehhhh.It was kind of all over the place and just seemed off. Luckily it still had a story hence why I didn't give it a completely terrible score, it's  watchable.

It was fitting, for the style of anime this was, a cute and fluffy little movie that didn't take too much to think about in the sense that there wasn't any drama or intense fighting.

Voice acting was good, I felt that the characters voices really lived up to what I expected when I read the manga. Again I haven't really got too much to say in this area except it was okay overall, nothing really stood out in this section like some other series I've watched.

PS- This is for the Daily Anime Marathon for March 2016

(This is practically copied and pasted from my previous review for the 3 mini episodes released in 2012. Link to the review is here)

Another update! Just scrolling through my "Want to Watch" list and found this little gem in there, and decided to get to the bottom of it!

POTENTIAL SPOILERS SO BE WARNED

Hiyokoi (ひよ恋) is a romantic comedy written by Moe Yukimaru. Now for everyone to know, this isn't NESSESSARILY an anime, these were specials released in a magazine (I think taking from what I read) , each about a minute and a half each, consisting of 3 "episodes" It was basically advertising for the manga, so don't get too disappointed!

The story is about cute, tiny, and shy Hiyori Nishiyama, who returns to school after being hospitalized due to a car accident. Hiyori has a very obvious fear of strangers, and when she is attempting to make the first step, blunt Yuushin Hirose steps in, late, and abruptly makes fun of her as soon as he walks in. The later is just some cutsy events featuring him and her, it's innocent, it's cute, and above all it's completely cliche....WHICH IS NOT A BAD THING!

Like I said, it was basically an advertisment for the manga, which I was disappointed to find out because hey, who doesn't love a little cute anime like that? That was my only complaint, the manga is very cute, and I recommend it completely!

Thank you for reading, hope this helps, I will look into hopefully asking the admins about allowing me to flesh this page out a bit instead of it being so blank.

Comments are always appreciated! Hope to hear your responses!

Hiyokoi is one of those shojos mangas adapted in a series. It starts with airing an OAV to give you a before taste.

The story is cliché and not original at all. It reuses Lovely Complex premise in a different way. The boy is a tall giraffe and the girl? A chick litterally. One single episode is clearly not enough to pinpoint the goodness of the story though.

The sound is quite normal here. Not famous voice actors, but quite enjoyable. Nothing extraordinary here.

Animation is average again. Not messy but definitely not memorable.

Characters are cliché. The frightning but nice guy; the cute small girl, the reliant best friend, etc. You got the point. Every shojo manga cliché is here. Nice vibe to the characters though, specially the main guy.

Overall, if you like traditionnal shojo manga settings in high school and overwhelming heart series, you definitely should try this one out. Not exceptional but not lame either. Some ideas in the first episode are a bit exagerated (tell me how the girl can fall in love with the guy in just two days!?) If this project ever come out as a full fledged series I will watch it for sure.

Score: 3.2/5 but waiting for the actual finished series. You never know what may happen. Maybe it will be a splendid gem.......but I highly doubt it.

Next! Mononoke and my actual review of Black Butler season 1 and Trust and Betrayal.

Okay so first off i love the story. Its extreamly cute hate the fact there is only one episode and that it is only 23 minutes long i just hate that. It was a cute story and i think they should of done more episodes honestly i thought it should of been a series It would of been a good one but sadly its only one episode thats why i give it a 9.5 i love every thing else but that.

The story of Kiyokoi is a simple love story about a high school girl who is extremely shy, who eventually overcomes this shyness and makes friends and finds love. It may not be the most original story line in the world, but the overall story was cute and somewhat entertaining. There were a couple of moments that did provide some humor that provides one with a light chuckle. Even though I did find Hiyokoi entertaining, it wasn't really that entertaining for me. However the story is a cute lovey-dovey type story and had more good than bad.

The animation was not all that great but it wasn't terrible either. I felt that the background were extremely static and uninteresting, and that they didn't provide an environment into which the characters could be immersed. However, the characters themselves were pretty well done and they were able to show emotion.

The characters were pretty likable overall. Hiyori was a cute little character that I found to be likable. She is extremely shy, but she is able to make friends with the help of Yuushin, who sits next to Hiyori and is pretty much the polar opposite of her in personality. I found him to be likable as well, but he seemed kind of uncaring to Hiyori at times, and can seem like a jerk at the begining if you look at it one way. Despite the very short time we have with these characters, Yuushin is able to have Hiyori have a major character change as she overcomes being shy.

Hiyokoi is a cute little story, but is not very entertaining, and isn't an anime with great backgrounds, but the characters ane nice and its an all around good story.