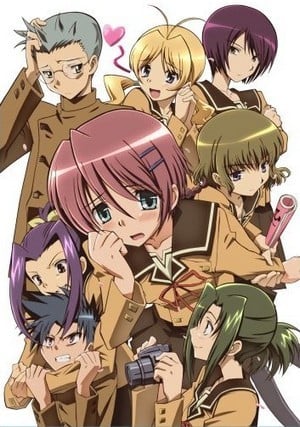 Hitohira is both amusing and sad at the same time. It's the story of a meek, timid female student and her journey of change. While that might sound cliche, there's more to it than that.

The development of the main character is almost painfuly slow. However, you see her develop in subtle way that, unless you look for it, you don't really see that much change. While following her journey, you meet the others along the way. Friends that she makes, memories that she shares and the partings that follow.

I will warn you in advance that this is not for the strong hearted. If you feel emtion at all, you will probably wind up crying at several parts. However, it is enjoyable.

The story was well thought out and fits well. Since this is a short series, they had to condense quite a bit into only 12 episodes. That being said, the flow is almost perfect. The only faults I can really find is that you see no resolution on what was becoming a love interest. You can speculate about what would happen but the creators never really defined anything.

I felt the animation could have been better at parts. It seemed that they tried to integrate rotoscoping with animation overlayed at certain parts but didn't quite get the integration right. However, the scenerary was beautiful and the character animations were well done.

The soundtrack fits the video quite nicely. There are really no complaints here except that I would have liked to have heard a little more diversity. That being said, the soundtrack to this anime is wonderful.

All of the characters fit their respective rols well and showed enough diversity to be adaptable when they needed to be. The voice actors behind them all gave convincing performances and contributed to the overall success of this anime.

Overall, this is a wonderful anime to watch. I would recommend it to anyone who enjoys emotion and the struggles of the underdog. My rating was determined by doing an average of the combined scores.