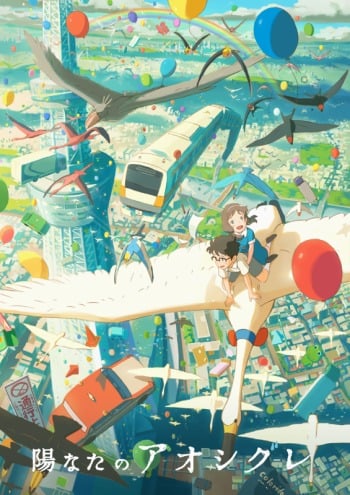 Both anime's have beautiful art and soundtracks. But the major thing that makes them familiar is Love and confessing your feelings.

Same studio. Art style looks really similar, story is a bit different.Taifuu no Noruda - 2 friendsHinata no Aoshigure - boy falling in love with a girl and ending up confessing his feelings.Both animes are short, but heart warming, cute and easy.

Both are short, nicely animated, quite simple, but honest and with a deeper meaning of friendship, honesty and what it means to be brave.

Expressing your feelings to someone you like.Great animation, nice soundtracks and story.

Fumiko, a timid school girl, shyly confesses her feelings for a boy named Takeshi. But rather than return the sentiments, he apologetically explains he needs to focus on baseball instead! Crying and embarrassed, Fumiko runs away down a hill – but she goes so fast, she can’t stop!

Same studio. Detailed, soft, but great art style. Main characters are very loud and they yell a lot, but they try to confess their love to the person they like.

come back to my mind

The protagonist is with friends but bored with the conversation. His mind often slips away to his own imaginary world and comes back to them. So their conversation doesn’t go very well...

The old granny playing peek-a-boo is gone. Instead, a stranger appears and draws closer to the child. Peek-a-boo involves exercising memory, and looking directly at your partner.