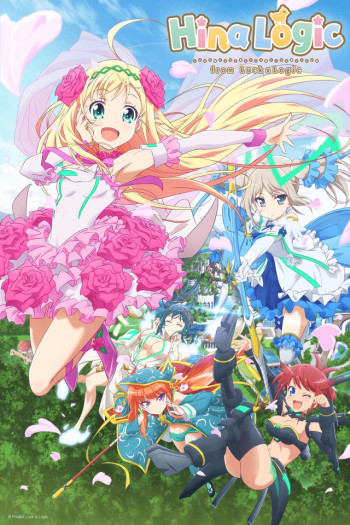 While technically a spin-off  this anime with bare-bones ties to the original series leaving little more than a few cameo's for the original cast. This anime is practically a different show and can be watched without seeing Luck & Logic. While coupling is still part of the power-gain-transformation it's handled completely differently to the extent that this series might as well not be related.

What it leaves us with is simply a slice-of-life show about the everyday lives of  magical girls that power up by supposedly teaming up with characters from and in different worlds. The relationship between other-dimensional being and human doesn't really come up as a large part of the show at all so they could almost be normal power ups though it does work with it a tiny bit in subplots the largest amount of time is spend on magical girls being cute together. Being cute together amounts to lots of lesbian-subtext from ''lewd'' handholding, girls on top of each other, overt declarations of love and nude fun.

While the girls powers do come up quite a bit it's generally not the entire focus of the show but does leave us with some action scenes of varying quality. In the end this show just really is down to it's core about cute girls doing cute things, a complete abandonment of the prior series style and substance and I'd say that's probably for the better. While this anime doesn't do anything in particular to earn praise it does at least pass the time harmlessly. The mostly episodic plot is largely coherent and while the comedy isn't always striking home it isn't regularly obnoxious. The overall plot is largely non-existent but characters all have ongoing goals that at least give some sense of direction.

The anime has an energetic opening theme and closing theme fitting the setting. The characters all sound like how you extent them to from their appearance with consistently believable voiceacting.  The animation is generally consistent with a few quite noticable hickups here and there in a handful of episodes but in the end it manages to stay on model at least 80% of the time. Animation cuts are generally not too noticable outside of that though there are moments of lazy animation.

As with ordinary slice of life anime the characters and their interactions are what you watch the show for. The characters themselves are more than distinct enough with varying degrees of development on the characterisation. Their designs set them apart and makes them easy to distinguish as well. The main cast all gets motivations to a greater or lesser extent depending on their screentime. The Ninja siblings having the least character exploration while the other 4 or 5 cast members get more thoroughly explored.

If you're looking for a show about the everyday life of magical girls training to become magical girls in a magical girl raising school with a lot of lesbian subtext and no real enemy for them to fight then this anime isn't the worst pick you can take. It feels neither incredibly imaginative and most of the time is absolutely pointless but quite fun most of the time.