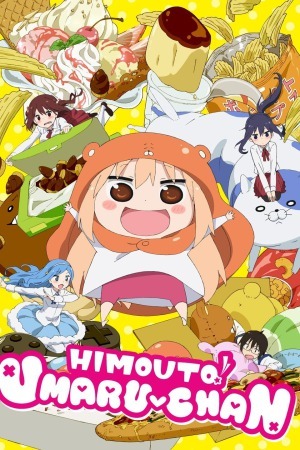 I will be comparing it to the manga, since they are taking everything from the manga.

For starters, this is not incestual. For some reason I've had countless people assume this would be a cutesy slice of life romance between brother and sister. This just couldn't be further from the truth.

The story follows Umaru and her brother Taihei in their day to day lives. Umaru is the school idol at school, who excels in everything, and everyone loves. That old cliché. At home however, she's an anime loving, junk food binging, hardcore gamer. Her brother works to support them both, and gives his all to make his sister happy, while trying to put up with her often spoilt attitude.

When I first saw that this series would be the usual 24 minutes, rather than 5 like I expected, I was a bit nervous. The manga consists of 100+ chapters, each around 8-10 pages. It's episodic so to speak, so I wasn't sure how well they would make an anime out of these scattered mini-plots. They did a great job though.

Unfortunately the show suffers from the same reoccurring setup.

Umaru: "Onii-chen give me gaem."

Taihei: "No I got no money we are going into crippling dept because of you."

If you're okay with mindless viewing for some chuckles/burn some times, go for it.

Himouto is done by Dogakobo; A fairly solid studio that has a good track record. Some of their best in my opinion include: Plastic Memories, Engaged to the Unidentified, and Gekkan Shoujo Nozaki-kun. Now they've hit us with another anime that showers us in that Dogakobo style, but falls short in terms of content.

Dogakobo has a very nice, and smooth color palette that I personally love. They usually have great character designs, and no rough movement in characters like many new studios might.

Opening theme is a pretty enjoyable watch. I guess.

This time around, the BGM and openings aren't as prevelant as many other works. I did however enjoy the opening quite a bit, but not enough to watch it often like, for instance, Death Parade. Average BGM isn't always a bad thing though. The music seemed to fit well in each corresponding scene, and fit the mood well. I just hope they keep it up, or improve in the later episodes.

OP has a nice catchy song that gets me smiling and tapping my foot. These are the kinds of openings I love. Openings like Barakamon and Working! make me giddy.

The one character that struck a nerve with me was Sylphynford. Not because of her attitude though. I don't mind that aspect as much since I've dealt with it through 100+ chapters of the manga. What annoyed me was her hair. When reading the manga, I always imagined her having a softer color. Peach or light pink even. Instead they give us the bluest blue you've every fucking seen. Not only that, she's the only one with abnormal hair color. Whatever maybe I'm just being rash.

Umaru was exactly like she was in the manga. Which is kinda good, kinda bad. She's spoilt, lazy, and adorable. Then she has those rare moments of love and affection for her brother which makes my heart go doki-doki. But then she goes back to annoying.

Ebina is her usual shy self, which I don't really mind. Shy girls have their own appeal, though it can be annoying. She's really sweet in the manga, and is still so.

Umaru's brother, Taihei is my personal favorite. Mostly because he doesn't lust over his sister, but still gives her love, and does his best for her. He has many 'awwh' moments with his sister throughout the series, much like we saw near the end of episode 1.

Overall, I'm really impressed as to how they managed this one. For a newborn studio, they've been doing better than most well-known studios. The story is very engaging, but may not be right for some. It's a simple comedy slice of life, with feel good moments. Characters are great. Ebina > Umaru. Fight me.

At the beginning, I didn't even look at this show because of the description that Crunchyroll gave me. It led me to believe that it was another incest romance show. I really did not want to watch one of those shows. The colorful colors and the shape of Umaru also misled me to believe that. When I caught up with a lot of the shows I've been watching, I somehow decided I'd give this one a go and I absolutely love it now. And just to be clear, it's not incest.

It's pretty funny to be honest here, because of Taihei's reactions to Umaru. Umaru is so cute when she's at home. It's like she's a stuffed animal~ (not that she is, but you get the idea) Kirie was kind of scary at first but she was revealed to be a nice character later on.

It was really funny when Ebina kept slipping her accent out and tried to correct it even though nobody seemed to care. One character that stood out was Sylphynford. I thought nobody would use the brightest blue on hair. I was wrong. Her eyes are so cute though and her attitude towards Umaru is really amusing. (I like blue hair though... Anime characters should do that more often)

I think the story's going to develop more in the future and it'll get even better than now. The animations are pretty nice and I think the music and the voices really fit in with the characters and the situation they're in. The characters are really nice and they don't seem flat and predictable so that's a plus~

Overall, I really like this show and you guys should totally give it a go too. It's not bad.

Before I watched Himouto, I read a couple of chapters from the manga a couple of months before the episode, and I knew that the anime would be great too. So was it? 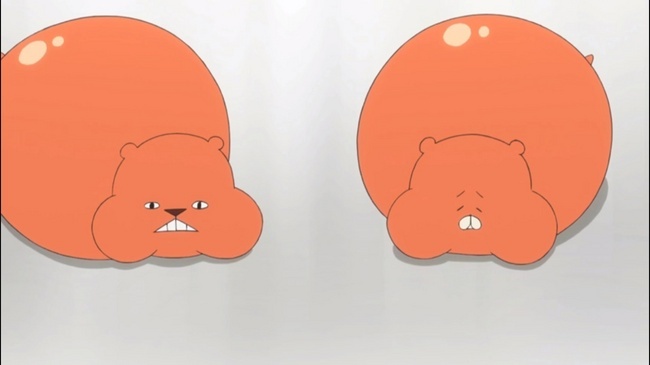 I'm not going to lie. If you are a beginner, use this anime as a resource at your own discretion. I was shocked to hear so much advanced vocabulary and grammar in a shoujo anime because usually that shoujo animes contain simple vocabulary. Also, there is one episode where Ebina will speak some Akita dialect. Although the Akita dialect isn't hard to understand, it can pose a challenge to intermediate learners. Still a great resource for intermediate and advanced learner, though.

The story is rather simple. Umaru moves in with her brother, and she is a secret otaku. Although that is the overall story, each episode is split into several different mini-stories that usually contain many laughs and parodies of Japanese culture. Speaking of parodies, there are a lot and you may come across many parodies throughout your time watching this anime. One parody that many people might not catch is that the famous Japanese department store Aeon is named Nyaon. Nya is the sound a cat makes in the Japanese language. Besides these things, don't expect to have a full blown story with plot elements. The parodies are what makes this show so great and I think many people will like The Grudge parody. 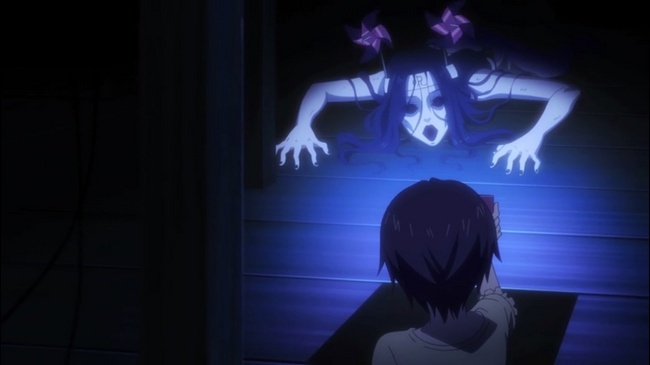 The animation is typical of any shoujo anime, so don't expect any awesome cgi. I will say that I love how the characters are dressed and drawn and it really fits there personality. Whether Umaru is wearing her hamster hooded coat or her cute attire, it is fun to see how cute she really is. That brings up another good point. In my humble opinion, the Japanese have some bad fashion taste that I have seen so to see these anime characters dressed so nicely, it was another one of those special treats. 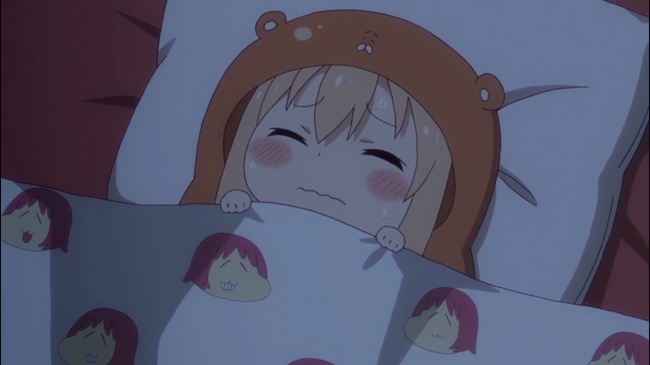 Let me start off by saying that the opening and ending theme songs are really great and whenever I think of Himouto! Umaru-chan anime, those are the first sounds to pop in my head. The OST is not that bad either, but don't expect a Clannad OST here. It's just your typical shoujo anime OST, except slightly better.

There are five main characters: Umaru (indoor and outdoor mode), Ebina-chan, Umaru's brother, Kirie-chan, and Tachibana. Each character has his or her own personality that I think people will rather adore. Some anime fans I know or at a impasse when it comes to Umaru. Some think she is selfish and stuck-up while others don't care and say it's part of the show. I, for one, like both personalities that Umaru presents to the anime. I, like everyone else, wish that her brother would put his foot down sometimes though. 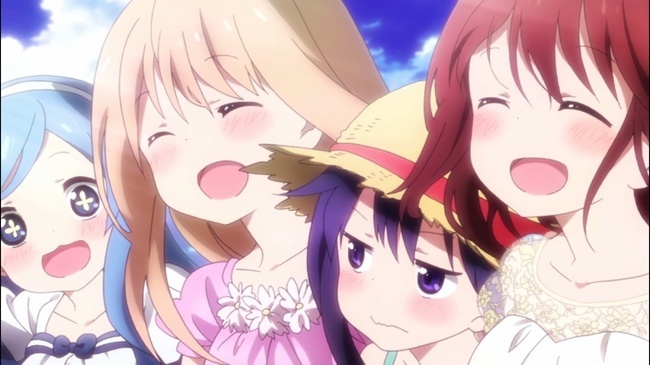 I thoroughly enjoyed Himouto! Umaru-chan and think that fans of comedy or the shoujo genre will like this anime too. My only real complaint is that I wish we would have seen more of Umaru's outside mode more because she is so freaking cute. Also, I think that we didn't get to see enough of Ebina-chan and Kirie-chan. Besides those two things, the anime was great and followed the manga panel by panel.

Like my reviews? Want to learn Japanese? Stop by my profile and leave me a message. As always, hope you enjoy my review and thanks for reading until the end. Don't forget to hit that like and follow button!!!

CAUTION: The next anime can be very very addictive.

Story: The story of Himouto! Umaru-chan is a refresing comedy about otaku culture, school life and "life" in very general terms, they treat the deal about something that I think it's up to all of us, that is the question of appearances; that question we ask at least once in life, if we show ourselveshow we really are orto show us the way that society wants to see us, in addition to talking about things like friendship and brotherhood. Personally, I think it's a great comedy, with humor and with a call to reflect on ourselves. (10/10) because I can not go over 10.

Sound: Well, I was listening it with headphones and the sound was very clear, although i'm not fluent in japanese yet, but i heard every dialogue and every voice perfectly. What made me love more the female characters were their cute voices. (10/10)

Characters: They are not empty at all, each has its own personality, its own distinctive features and each of the elements necessary to give real life to the character. (10/10)

- It's not a common story, really, and I received much more than I expected at first, it is one of the few series that you can think they don't offer too much, but when you watch them, you realize that they offered you the entire world. This is the kind of story and the kind of anime that you really love in every aspect.

I am sure that you will spend a very good time. It will not disappoint at all.

And I was left wanting more, so... I'll read the manga. Bye!

*Note: If there's something bad in the gramatic or something, i have to say sorry, i haven't practiced english very much, in the next reviews i'll be getting better and better!

I'm hooked since the very first episode. My brother suggested this anime and I can say I'm glad he did. The storyline is easy to follow and Umaru is so adorable.