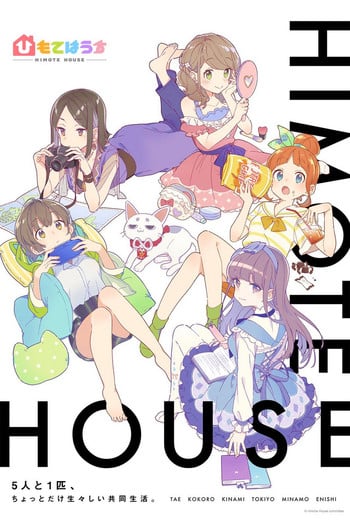 A lightly paced manga about two girls who live together. A classic odd couple setup featuring a responsible character with a caring atmosphere and a more free spirited musician who has trouble both feeding herself and paying the rent.

This story is about the life of two very strange housemates; a cheeky kid named Ino and an anti-social grown-up called Roku. Ino, who was passed around from one relative to another, grew up in a city but one day he had to live in a rural area in an old and isolated house with a young man named Roku due to some problems with relatives…

"It was Accan who first taught me the meaning of fun". Atsushi's cousin Maki, who has always been fragile and scrawny ends up lodging in his apartment.The Maki he encounters after several years is a giant of a man and just Atsushi's type on top of that. Atsushi is both delighted and really troubled.....

Follows a female college student named Ryou who goes to college in Tokyo and becomes a member of her school's movie club "Butter Nut." Ryou's expectations of a dreamlike college life are dashed when, through a misunderstanding, she ends up sharing an apartment with a man named Chihiro who Ryou thought was a woman.

After his parents passed away, Aizawa Kyouichirou, a middle third year high schooler, rented out the 6LDK apartment in the form of room sharing as suggested by his guardian, Yagi Akira. The occupants were Rio Forest - a foreign college student, Mutou Keigo – a National Literature college student, Kawakami Shinji – a top host and Tachibana Jinpei – a workaholic. After they started to live with each other, they learned how to love and care for each other.

When Yae and her mother decide to take in two teenage boarders,​ Yae finally realizes what it's like to have sisters,​ an experience she has always dreamed of.​

The story is about Miyagawa Shota, who just graduated from high school and left his hometown to work in the famous Tsurumoku Furniture factory outside of Tokyo. In the company dorm, Shota is assigned the roommates Tabatake, the most senior resident of the dorm and the most obnoxious roommate, and Sugimoto, the in-house Casanova. With these two roommates, Shota is constantly caught in awkward situations.

Mizuki just lost his job. Without money or a place to live, he has no choice but to stay with his older brother in his company dorm room. Since non-employees aren't allowed in the dorms, Mizuki must live there in secret like a house cat. At first he’s intimidated by his older brother’s roommate Toru, but seeing a softer side of Toru changes his opinion. Toru treats Mizuki well, but Mizuki wants to become more than a pet companion.