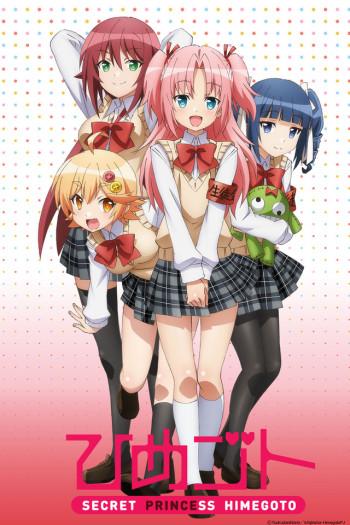 This had a lot of potential, but by the end it was just painful to watch. During the first episodes you wonder why they are just 4 minutes when it certainly deserve to be more, but by the final episodes you tell yourself "oh, thats why". For those of you who think "I like randomness and traps so I will watch this" prepare yourselves for a boredom so strong it feels like something is hurting your soul.

Well there is none, a guy gets saved by some girls from scary people that want to dress him like a girl to sell his body and end up dressing like a girl and selling his body. The rest of the episodes are what should be considered "just trap things", being confused for a girl by guys, buying clothes, everyone tring to rape you, etc. This is all, and I mean all. By the end they try to add depth and fail misserably. I say 1/10 because I'm just that bad at rating.

What can I say, its animated using the bread and butter of the moe religion. Everything is close ups and big eyes, but since I didn't feel like something was hovering out of place so 5/10 because I have no idea how to rate things.

Let me begin with the story of the greatest opening I can remember: When I was younger I began watching this anime (for dramatic purposes, I decided to watch it today :P) and the most unexpected thing in the world happened when I pushed play. Expecting some kind of cutesy and too happy to be realistic OP I was welcomed with what sounded like a man who drinks and smokes too much yelling angrily "where the hood where the hood where the hood at" with rap music trying to be heard between his screams, and after 30 seconds of this while "moe" characters jumped around happily it ended leaving me with laughter born out of confusion. Later I learned it was the subtitlers messing around who added the song over the original OP (which, predictably, was a mess of impossible happiness that feeds on the despair of those who listen to it and are forced to remember their lives will never be as happy as that song). Still, its the most surprising event since I discovered how to use a microwave to make sandwiches with melted cheese. So I say 9/10 for the where the hood at, 1/10 for the annoying voices and despair inducing OP, because I just suck at rating stuff beyond a simple "good or bad" scale.

What can I say, we have a bunch of girls who act like a trap is special because he's cute, even though they are surrounded by traps and boys who want to rape traps. I would say this is an argument about the decadence of our morality as society, in which that which is uncommon becomes more desirable. This, in turn, means that everything that our ancestors tried to eliminate is now worshipped and desired. Kind of reminds me of a story about an idol and some tablets being thrown, I think from the anti-apple groups of the internet calling everyone I-diots even though they do exactly the same with their loved brands, in the end we are all so stupid the only way we can feel smart is calling others stupid. It's kinda sad, but I guess I don't care enough about others to change things. I should work on that. I say 3/10 because meh, I remembered that I get bored of things easily when I got bored of writting this.

What can I say beyond anything else I have said? If you expect me to tell you if you should watch it or that you shouldn't, well... do whatever you want. I give this show a 3/10 because I sometimes wonder if anything has meaning at all, we work for money to use in crap we dont have the time to enjoy because we are working, then we have to work harder because we have to pay the cost of the things we really need and we end up tired, in pain and sick, until we are too tired, in pain, sick and old to work which ends with our families abandoning us to rot until we die and then they all appear to fight for whatever you had left. But hey, at least a girl I met in the supermarket smiled at me today, she wasn't that pretty but at least I confirmed I'm not a shadow or something.

I'm liking it...but I HATE 5 minutes anime, it just feels stupid...
Why are they making anime like that? What's the point? You watch it and the episode ends before you even know it

Now since this show only plays in 4 minute long episodes, I don't really see a story very evident in the whole show. There isn't much to say about it other than a Cross Dresser who has little known past and a bunch of girls who want to take advantage of Him due to their weird fetishes.

Now when I talk animation I talk about how well the characters are ... well "animated" to convince the viewers that the characters are alive, and according to my standards, they level out pretty evenly, with the even character movements and facial expressions, it's everything you'd find in a typical Anime.

Now the overall sound wasn't that great, but I got to admit that's one Catchy Opening and Ending Song. Other than that, the character's voices sort of matched their personality? R18 sort of reminds me of Rias Gremory, especially if I heard her voice, but quality wise, it sounds a bit like they recorded it with a potato.

Now the characters I did like though, There's a boy who is in Kahoots with some Loan Sharks, who forced him to Cross Dress, now I'm no Sadist, but I just find it hillarious watching a cross-dressing boy being forced around by Women!, but that's me being biased, in my honest view, I see the characters as well developed and having great dialogue (acommpanied by the potato voices).

Well... It's a good anime? I mean aside from the Vegatable Quality sound it could've played well, also if it wasn't for the 4 minute time limit which in itself is a theme I guess? (idk) but overall my final Score is 6.5/10

Asahi Production’s, 2014, high-school-cross-dressing-comedy, is packaged in extremely short episodes delivered at break-neck speed. You really need to strap yourself in for the ride because it is all too easy to miss bits if you blink. Is it worth it? Certainly. This is a barrel of laughs and all extremely pervy (if-you-like-that-sort-of-thing). [Do not watch it with your kids as you will not know quite how to explain it.] The all-girl Student Council is recruiting new members based upon one sole criteria – is she cute? The only trouble is that their latest recruit isn’t a girl. The main character is high school boy Hime Arikawa who is being held responsible for his parent’s debts. The council make him a deal: dress as a girl, be their dog and, in return, they will cover his debts. He agrees to this bizarre deal and quickly learns that the council have super pervy plans for him. Add to this mix is Hime’s cross-dressing little brother who joins the Morals Committee. They are committed to the destruction of the Student Council. Most episodes focus on the humiliations that the Student Council plan for poor Hime. Be it semi-nude modelling for the art club, becoming a cheerleader, forcing him into bras and a thong, or making him compete in a beauty competition, nothing is too low for them… Then, one day, they go too far and live to regret their choices.

Through the story the audience learns that an alarming large number of the girls in the Morals Committee are actually boys whilst the one boy is actually a girl. Following this? You get the picture. The Vice-President of the Student Council (Aruku 18-kin) develops feelings for Hime and by the end of the story to girls come to consider him to be a friend and equal. The whole thing is an absolute riot that clearly will not be to everyone’s taste. Only in an anime universe would it be possible for pubescent teenage boys to pass as convincing girls. This and the fact that both the girls and the boys seem to get quite over-excited by boys-in-girls-clothes makes this an extremely odd sub-genre. It is not unusual in context. The same idea is witnessed in ‘Genshiken: Second Generation’ where a principal character is a cross-dressing boy who meets with the confusing curiosity & affections of both male and female friends (regardless of whether they know of his true gender or not). Maybe because western culture associates animation with harmless, family-friendly, children’s cartoons, that it remains a significant culture-clash to see such an adult-orientated subject appear in anime. Yet in Japanese culture all this seems quite normal and the genre is aimed at quite young men (seinen/shonen). Such a show would fit nowhere in western TV schedules. If it got shown it would be immediately banned. The numerous references to male genitals and the normalisation of teenage obsession with cross-dressers would be deemed unacceptable. The fact that the boy involved gets to quite like dressing would clash with western concepts of ‘toxic’ masculinity. This is ladyboy culture that could only arise in Asia. That’s the impression you get, right or wrong.

Is this show worth watching? Of course, the critics hated it. The ritual humiliation of Hime crosses the line into actual sexual assault. This goes beyond what many will swallow even if it is sugar-coated in humour and nobody gets hurt. It is a dangerous topic and it is hard to accept that it could be normalised with humour. Nobody should think that assaulting a transvestite is OK because they might like it. This is a stupid fantasy and not territory any anime should venture into. These criticisms should not be extended to the gender-bending nature of the story. It is quite a liberating story of young people being exactly what gender they want to be and everyone accepting it as quite normal. Do these positive aspects outweigh the doubts? Yes. This is perfectly watchable and enjoyable. It is completely daft. You won’t get all the jokes. It is easy to plough through the entire series back-to-back in an hour. It will be an hour well spent. Go for it. If only real-life was more like this. Adorable.

turns out the entire population of that town is into dudes, who knew