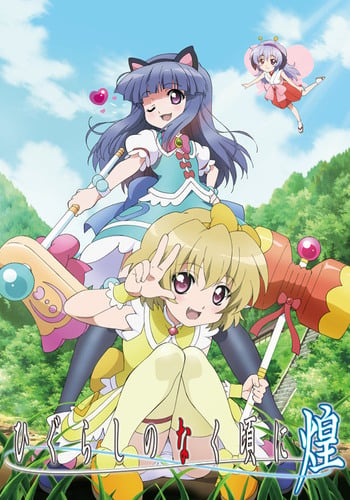 If you're looking for anime similar to Higurashi no Naku Koro ni Kira, you might like these titles.

This anime is based on Takenashi Eri’s Take Moon manga and commemorates Type-Moon’s 10th anniversary. Various characters from Type-Moon’s works such as Kara no Kyoukai, Fate/Stay Night, and Tsukihime are featured in this.

Aside of being parodies of one anime (various in the case of Carnival Phantasm), both share the same kind of humor and they will give you a similar feeling while watching them. So, if you liked one, you should try the other one.

Spoiled, stuck-up Chitose comes from a wealthy family and an expensive school in the city; that is, until her father suddenly dies and his company goes bankrupt. Now with not a single yen to her name Chitose finds herself attending Inakano Middle School in the middle of the countryside where even animals are admitted as students! When the family lawyer attempts to steal Chitose’s one remaining possession – her one hundred million yen pink goldfish, Gyopi - Chitose discovers that her father left her a large amount of stocks and shares. However, instead of using the money to return to her previous life, she decides to rebuild the shabby rural school. Now alongside her new friends Wapiko, Kitada and Aoi, Chitose tries to run her new school effectively and outdo her old rivals at Tokaino Gakuen. Though with Tokaino sending spies to the school and games of kick the can in enemy territory, the path to success won’t be easy...

Kokonotsu “Coconuts” Shikada dreams of becoming a famous manga artist. The only problem—he's terrible. His real talent is selling the complex and delicious snacks in his father's “dagashi” shop. He never thought much about the family business until the trendy, eccentric Hotaru showed up. As a lover of “dagashi,” she can't let his talent go to waste and decides she won't stop 'til she's sold him on sweets.

A strange red-haired boy named Saburou Takada is a new student at a small countryside elementary school. A classmate named Kasuke nicknames the kid "Matasaburo of the Wind" due to a strong breeze that passed by the school when the youngsters first met him. Some of them notice that peculiar incidents happen around Matasaburo.