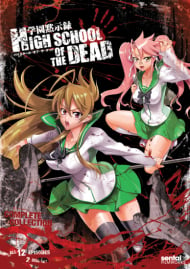 Highschool of the Dead is a show that knows a very, very base demographic and knows exactly how to pander to it. It aims to please simple-minded, uniformly male teenagers with base level action and lots and lots of large, jiggling breasts. Highschool of the Dead has quickly entered into the ranks of shows extremely popular, not for being well-written or emotive, but simply for being a barrel of big, dumb fun.The problem is... it's not very good at it.As the name would suggest, Highschool of the Dead involves a highschool and dead things. More specifically, the series begins in a highschool and revolves around a bunch of highschool students, who happen to have walked into a George A. Romero film. In other words, they're surrounded by undead, bloodthirsty corpses... zombies. From here, the plot is about as simple as can be. The cast has to try and not die.So all in all, it really speaks volumes that Highschool of the Dead manages to fuck up such a simple task, for a wide variety of reasons. But let's start with the most glaringly obvious one... the fanservice. OK, so considering the demographic the show is aiming for, it's hardly surprising that HotD uses a lot of fanservice. But Highschool of the Dead crosses the line of what an acceptable amount of fanservice would be repeatedly. Any scene that was otherwise good had an irritating tendency to shove some schoolgirl's underwear into the camera. And don't even get me started on the infamous "Boob Matrix" scene.Of course, no matter how much fanservice is in a show, it would not destroy an otherwise good show. So let's get to the next reason HotD is an incredibly poor anime - the characters.Let's summarize the cast very quickly. The everyman, the ditz, the needy girl, the bitch, the action chick, and the nerd. Not one of these characters has any more depth than that. I have literally told you everything you need to know about the characters in the space of one sentence. Takashi is completely unremarkable, Shizuka is dopey and annoying, Rei is irritatingly helpless and inconsistent in her character, and Saya (probably the worst member of the cast) is a self-righteous bitch who has no consideration for anybody else and considers the rest of the cast below her. The only passable members of the cast are Kouta Hirano (named and designed after the creator of Hellsing, a MUCH better take on the same style), who manages to make his military obsessions at least entertaining, and Saeko, who manages to not be annoying.The worst thing about Highschool of the Dead, though, is that for a show that tries to be simple and fun... it's very boring.All in all, a survival horror really needs you to care about whether the characters live or die to work. At first, after a seemingly significant character is killed off, it seems quite possible that major characters will be killed off, and that the series will be a struggle to survive. And yet, after that, not one character we care about dies. It becomes quite clear that the entire cast is in no real danger, due to having that strange immunity from danger that being a main character grants you. This means that we are simply stuck watching these unlikeable characters do things we don't care about. It would have at least been passable if the action had been well-directed, but it really isn't. There are no fight scenes that really stick out (barring the aforementioned Boob Matrix, which sticks out for all the wrong reasons). The action is mediocre at best. All of this leaves it up to a plot that really doesn't exist.So what does this leave us with? A show that really doesn't have any positive points at all, really. It's watchable, I'll give it that much, and the first episode was quite good. But it really doesn't follow through on any of the potential it has. The themes in this show have been done before many times, and almost always better.Final Words: Just watch a George A. Romero film instead. Seriously.Animation/Graphics: 4/10Story/Plot: 3/10Music/Background: 6/10Characters: 2/10Overall: 3/10For Fans Of: Hellsing, Elfen Lied.

Ever seen a zombie movie? Yes? Good, this will be similar to those. No? Well, then let me explain. Story: This was your standard, zombie apocalypse anime. It starts off somewhat mundane, you'r average school life anime, for all of about 10 seconds. Then, all hell breaks loose as zombies pretty much spawn out of nowhere. The stroy then follows the protagonists as they attempt to find safety from the horde. It's done with enough action to keep you entertained, and with enough drama to keep the characters interesting. Animation; Apart from the fact that most of the female cast comes pre-oiled for your viewing pleasure, the animation is stunning. Detailed backgrounds, intricate details on the characters, and even the zombies look great. Sound: Ever wonder what a skull sounds like when it meets a broom handle? Well, you'll know after three episodes. The music score is upbeat and with enough dark undertone to match the story. Characters: This has the blend needed for a good apocalypse team. The brainiac smart-ass, the ditsy eye candy, the skilled nerd, the battle-happy beauties, and the guy who serves as their leader. And while much of the appeal comes from watching the girls' bounce around, they are given backstories and dynamic personalities. Overall: This was a bloody good time, emphasis on the word bloody. 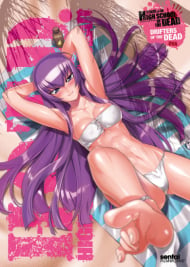 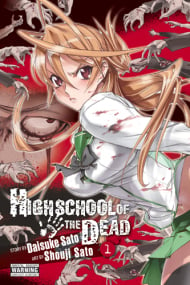 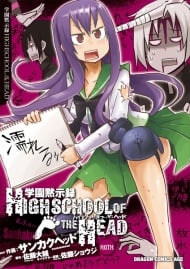 Gakuen Mokushiroku: Highschool of the Head