High School Prodigies Have It Easy Even in Another World! - Reviews 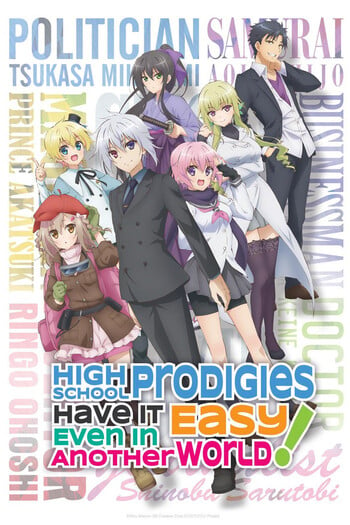 I thought that it wasn't worth it after episode 1 so i hang on to see if its getting better , it does not. 4 episodes in and it dosen't look like its worth my while so i dropped it.

The critiques are to many to count , they do have 1 related common occurance between them and thats the Main 7 Characters.

Most of Episode 3 was kinda good i think , that is the way the anime should have been but sadly it fails very badly.

The story and the animation and everything would have been good in my oppinion if instead of having 7 Characters you would have just 1.

Having every smart character as a kid makes me think that this anime is only aimed for a young audience , din't find anything to dispel that notion in the 4 episodes that i seen.

Also if someone would take an anime seriously at least do not give a character eyes of 2 different colors , or at least explain why they are that way instead of nobody ever noticing the difference.

Could have been good with only 1 Character (probably the Merchant since he would make the most sense and practicality to improve a inferior world with his skills) but instead we have 7 practicaly gods at this point.

Overall a anime that could have been good with less characters but that ended up being absurd an anime. For those that like a little bit of realism in a story i recommand that  you avoid it at all cost.

This anime is so incredible cringe. The plot is honestly so cliched, so badly written that I can only watch in horror as the history unfolds. So far animation goes it's decent but the design of characters is really lackluster for my tastes.

The story complexity goes so far as '' Evil evilest guys are super evil and like to be evil for the sake of being evil, so the good guy characters stop them and literally nothing can impose them a real threat ''. It reminds me to '' In another world with my Smartphone '', extremely simplistic villains and plots. Super generic protagonists , and bombshell sexy female characters that do something extremely well and that's about it. In fact you can exchange the samurai girl of this anime for the one of In Another world with my Smartphone, and you'll notice absolutely no difference, they even talk the same, it's like they are walking stereotypes of a Harem anime.

Speaking of which, the hook of the plot is pretty bland and incredible, in the bad sense of incredible, 7 teenagers who are ''elite'' ? elite my buttcheeks, they are way beyond being elites, the medic and the scientist girl make Stephen Hawkins look as a kindergartner kid with learning problems.

Also while some of them are justified, the others are simply ridiculous, why the samurai and ninja girl are famous ? Ninjas are supposed to be secret assassins , how did she became worlwide famous to be invited in their celebrity trip ? , how about the samurai girl ? Why only a samurai with Kenjutsu, is that special that no other combat style can approach her ?

And the Magician ? Look, I can understand the Merchant guy and the pseudo president character, btw I can't even remember their names since they are so bland and I'm in episode 6 of this torture, but why in heavens is a Magician along a girl who can make a damn spacial station ? How do you even compare those things to put them at the same level of celebrity ?

Also, the author has no idea about the themes he is treating with. Heavy cavalry being able to deflect bullets ? Does this man understand that the reason we don't have knights with armor anymore is exactly because of guns ?

Characters are bland , boring, completely replasable, and the storyline is so basic and boring compared to other Isekais that honestly it's just BARELY entertaining. Watch it if there is nothing else to watch.

In my opinion, this isn't the best nor the worst anime I seen. The overall show is something we seen a few times over the last few years. A bunch of high skilled kids get sucked into some other world with magic and what not. They start at the bottom, and they more than less use their skills to help those around them.

Many things they do is kinda cool, but it is still magic more than less. As an example you have a kid that floats in the air every 8 seconds he is on screen, and we are meant to believe that he doesn't have any magic in him. But there is nothing around to put him in the air, make it look like his head is off his body, and so on.

Now, is this worth a watch in my opinion? Yes. But should you go out of your way to see it? Most likely no, unless if other seasons come out.

Ignoring all the inaccuracies and all the false information, I did enjoy the anime, but the writer very clearly did not do his research properly, or perhaps did not care to.

This is a very unused concept that has a lot of potential, but unfortunately just wasn't executed very well.

Again, I did enjoy the anime, but it's far from being "good".

What a heaping, steamy pile of shit. Seriously, don't watch this: the characters are flat, uninteresting one-dimensional self-inserts, and the story, (even calling it a story is probably too generous), is utterly vapid and predictable.