High School Prodigies Have It Easy Even in Another World! - Recommendations 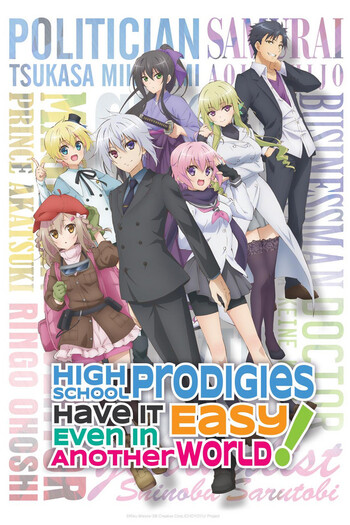 If you're looking for anime similar to High School Prodigies Have It Easy Even in Another World!, you might like these titles.

Both have very similar premises where top students are sent to another world and still manage to be at the top in this new world. Both also center around the idea of the students helping a group of lesser beings achieve greatness in this new world.

Both are adventure anime which have overpowered characters in a strange world. There is overpowered combat, magic use and battles with enemies. Both sets of characters must adapt to their new lives.

In both anime the Main Character is OP as hell and a super genius. Both anime have magic, both focus on building an empire. They also both share the desire to stop evil people from controlling/abusing their citizens. Both also have the classic light-hearted Isekai vibe, though Reikenzan isnt an Isekai anime. Other than that Reikenzan has a much stronger focus on training to become better