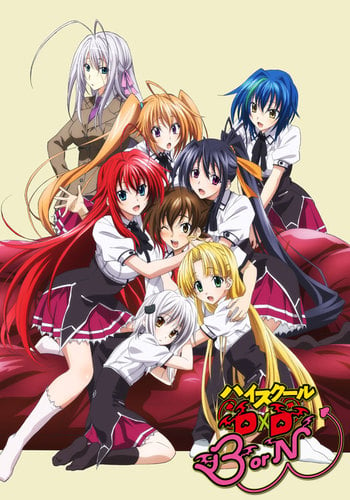 because I see a lot of similarities between the main characters Hyoudo Issei and Eren Yeager.  Neither character knows how to cope with problems very well, their main response is anger.  The source of their strength is anger, the more angry they get the stronger their power becomes.  The storylines are different but the main characters both have a strong sense of having to protect those they care about most to the point of extreme physical self sacrifice.  High School DxD is more of a comedy with plenty of ecchi but the way Issei acts in battle reminds me so much of Eren.  If you enjoyed the fight scenes from High School DxD, Attack on Titan takes that formula and amplifies it with a stronger plot and more violence.

Shinmai Maou no Testament is really similar than Highschool DXD. It's also an action-fantasy anime with a similar setting, with 3 different factions which were previously at war (demons, angels and fallen angels in DxD and demons, heroes and gods in Testament) having their eyes set on the main girl for one reason or other. Also said girl happens to be a red-haired demon. Needless to say it's quite ecchi (though I'd say Testament is way more explicit than DxD). If you enjoyed this one you'll like Shinmai Maou no Testament.

Takeru and his Leadership Committee comrades are the last line of defense when it comes to ridding Tenbei Academy of mischievous Maken users. But saving all these succulent student bodies from a hoard of hocus pocus hornballs is no easy trick. Not when there’s a pervy creeper pinning bras to the bulletin board, a magical feline turning coed cuties into irresistible sex kittens, and a must-see manga fest where the costumes get mysteriously shrunken down to scandalous sizes! Through it all, Takeru keeps his mind on the mammaries - and the mammaries on his mind - as the luscious ladies of the Leadership Committee prove that their magic is breast in class!

Takuma Akutsu has a “unique” appearance that, unfortunately, leaves him feeling isolated and alone among his high school classmates who shun him. Enter the Valkyries sent by Odin himself! Once they descend into Takuma’s life, he discovers they aren’t scared of him one bit! In fact, they’re super keen to get to know him better. As the intimacy between the Valkyries and Takuma grows, so too do their powers. And that’s a good thing, because they’re on orders to slay the vicious monsters intent on destroying the earth. How far will they go to deepen their connection, level up, and save the world… by any means necessary!?!

Takeru enrolled in Tenbi Academy because the girl-to-guy ratio is, like, 3 girls for every guy. But this bevy of bombshells is actually a school where teens beef up their combat skills using a magic power thingy called a Maken. Redheads with wicked high kicks, shocking blonde bullies, and aggressive brunettes are EVERYWHERE. And every time there’s a brawl, their clothes tend to disintegrate. Distracted by all the bouncy brawlers, Takeru has a hard time concentrating on his training. Things get sticky when the hornball can’t figure out how to use his Maken. If he doesn’t find his mojo quick, he’ll be dumped by the school of his dreams—or destroyed by an attacker who’s after his magic power thingy!

Taketo and the gang find themselves stranded on an island. Little do they know this proves to be a treasure-trove of material for Taketo's unique pornographic literary skills.