Higehiro: After Being Rejected, I Shaved and Took in a High School Runaway - Recommendations 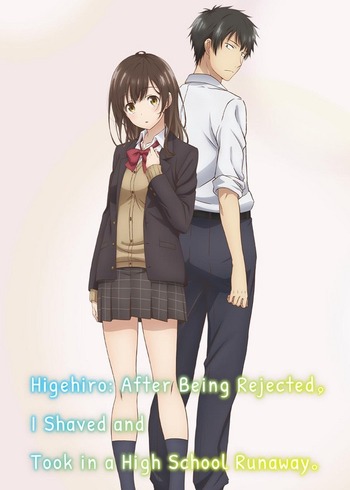 If you're looking for manga similar to Higehiro: After Being Rejected, I Shaved and Took in a High School Runaway, you might like these titles.

Hayato Heiwajima the soon to be successor of his grandfather's company, Heiwajima industries. His Maid and close relative Hatoko Heiwajima, is responsible for teaching him how to deal with females, However the problem is her teaching methods go beyond the ordinary...

Misaki is a 30-year-old virgin who has a bit of a crush on one of his co-workers, a pretty girl named Amano, but he has no experience and no clue what to do. Fortunately for him, he has an ecchi guardian angel…

Yariba Eiji, a corporate slave whose only hobbies are video games and manga, gets through life by spending his time off relaxing at net cafes. One day, he happens upon Minamisato Karen a high school girl and ends up scolding her. This leads to her warming up to the 29 year old Eiji...! Not only that, Eiji's little sister, childhood friend, and his subordinate are also becoming interested in him. Love is coming at him from every direction! Juggling between his work and his newly developed ventures into romance, will Eiji's peaceful days ever return?

Salaryman Hoshina has been sharing an apartment and bed with model Atsushi. Atsushi cooks, cleans, and remembers every anniversary, but Hoshina can't figure out why they are in this "type" of relationship. When Hoshina's younger brother moves in for a while, and the boys must endure until he's gone, will Hoshina even care? Will this time of separation be the turning point in their relationship? And which boy will be the one screaming, "Once is not enough"?

"From now on you will be my Goshujin-sama" A mysterious man came out of nowhere and proclaimed to Akiyuki--Young business man Souichirou-- Not only did he take advantage of Akiyuki's body against his will, but he turned him into a 'maid' exclusively to attend all of his needs. How will Akiyuki deal with Souichirou's unsolicited advances, how will he get out of this predicament?... Let the LOVE BATTLE begin!!

Can sensei be the heroine? Please? Due to a traumatic experience, I have a distrust of people called “sensei”. I, Saiki Makoto, was called by after school by the most popular and beautiful teacher at my school, Fujiki Maka-sensei. “I… love you” Eh– a confession out of the blue!? “Until you say you love me, I will continue to pursue you” Ever since then, I’ve been called by for “guidance counselling” after school, somehow watched AV together, being given excessive skin-ship, went on dates together. Over time, I gradually became conscious of Sensei…? But isn’t it bad for Sensei to go out with her student?

A beautiful older lady regularly visits a coffee-shop where the high school student Hayasegawa-kun works at. He doesn't know her name, her job, or where she lives, but she is nevertheless his "ideal woman".

Highschool teacher Saeki Nao is secretly a hardcore otaku who loves yuri manga. One day, at a doujinshi convention they participate in, Nao is eager to convey her feelings to "Nyapoleon", an artist she worships. However, it turned out to be a girl from her school, Kurumizawa Haruka, and moreover, she had to help her. After the event, they decided to go out for a meal, at Haruka's suggestion... When she wakes up in the morning, there is Haruka in the bed...?!